There was a time, from the late 1950s until the early ’60s, that if you saw a group of young black men standing together on a street corner in their neighborhoods, they were only singing. They were singing the music of the time. Music which became known as “doo wop.” At the time of its popularity, it was called R&B (Rhythm and Blues), but was later dubbed doo wop by a New York City D.J.

Doo wop was not only sung on neighborhood street corners, although it is believed that’s how it got its start. It was also sung in high schools, colleges, at parties, in high school and college hallways and bathrooms, and anywhere else that the sound would make an echo, or where groups of young black men got together for fun. The “black men” thing didn’t last for too long before white doo wop groups began springing up all over the country after the music became acceptable to “polite society.” 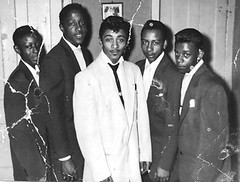 I have been lucky enough to know two men right here in Syracuse who took great pride in the fact that they had been part of several doo wop groups. I’m talking about Syracuse SAMMY Award (Syracuse Area Music Awards) winner Robert “Bobby” Green, and the late Mr. George “Bebo” Singleton. I didn’t know either of these men during their doo wop experience, but I’ve known Bobby Green since he played with a band called “Larry Ellis and the Black Hammer” at a club called Debs that was once near the downtown area on Erie Boulevard. Bobby recently granted me an interview with him at his home in Cicero. We talked about the doo wop groups he sang with and some of the other Syracuse area singers who sang with him, including Bebo. While at his home, Bobby showed me a veritable archive of pictures, notes and clippings of his and other doo wop groups from Syracuse and other areas. It seems as if Bobby has saved everything that has ever been published about his and other doo wop groups and R&B bands from this area. I learned that Bobby was in the second doo wop group to exist in the Syracuse area, a group called The Five Points. 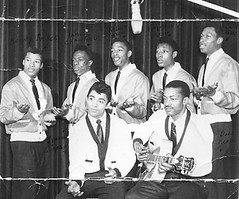 The Eldaros, which included Kenny Tucker, James Crawford, Bobby Green, Raymond Green, Levy Hall, Jimmy Singleton and Bobby Green’s uncle Duke Kearse (who taught Bobby to play guitar – thank you Mr. Kearse). The Eldaros recorded a doo wop song called “Baby Child,” which was never released for sale but was widely played on local radio during the late ’50s. They did however release a song called “Please Surrender” in 1957 or ’58 on the Vesta Records Label. 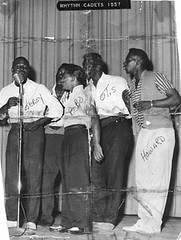 The Rhythm Cadets recorded and released a song written by Bebo called “Dearest Doryce” (about a girl of the same name). The Rhythm Cadets included: Mart Irons, Otis Smith (of “Otis Smith and The All Night Workers” fame), Howard Scott, Leroy Maco, George “Bebo” Singleton and Lonnie Bowman, who joined the group after Bebo left to join an all white doo wop group called the Teen Tones.

Bobby Green has a collection of old LP (long playing) records (33 1/3 RPM). Among them are some copies of “History of Syracuse Rock and Roll” volumes, one of which include a re-issue of “Dearest Doryce.”

The Quintones was the first doo wop group in Syracuse. I spoke to Syracuse businessman Theodore “Ted” Jones by phone, who says he was a member of The Quintones. He says they were formed around 1949 and continued until around 1955. It’s members included Rudolph “Rudy” Flowers who worked as a young man at Aunt Edith’s Restaurant, first tenor Lafayette Breland, lead singer Eugene Huntley, Vincent “Mouse” Alexander and second lead singer Theodore “Ted” Jones. The Quintones performed at the Apollo Theatre in New York City and on a popular television variety show of that time, “The Arthur Godfrey Show.”

I met Bebo Singleton at a club called “The Catch” that used to be on Erie Boulevard in Syracuse. I was the drummer in an R&B band called LeBlue, and at the time, we were playing The Catch every weekend. Bebo was always there. During our breaks, Bebo would always find one of the band members to talk music with, especially doo wop. I would listen with great interest because he made me remember the high school and street corner doo wop groups from my own hometown in Florida in the 1950s.

According to Bebo, he wasn’t just your regular run-of-the mill doo wop singer. Bebo knew and associated with big name entertainers of that time, and even when I knew him it didn’t take much to get him to harmonize his first tenor voice with whatever else was being sung. Bebo loved doo wop, but he also liked R&B, blues and jazz, which explains why he came to hear us every weekend. Sometimes he would talk about The Rhythm Cadets. Bebo said he wrote a few songs himself for the group (including “Dearest Doryce”) and was given recognition by the city. Bebo was born and raised right here in Syracuse, but unfortunately, is no longer with us.

Doo wop became as popular during the late 1950s as hip hop is today. In the beginning the “street corner” doo wop groups had no music or instruments to accompany their singing. They were given the name “doo wop” because of the rhythms and sounds one or two of the members in the group would make to keep time, provide a background for the lead singer and to create a “tight” three-part harmony. Doo wop groups became famous because of their tight three-part harmonies.

Doo wop groups sprang up all over America, especially after certain groups in cities like Detroit, New York and Los Angeles began producing it on 45 RPM records. Many of these groups became as famous then as many of today’s hip hop artists. They would choose unique names such as The Markels, The Cleftones, (The) Tymes, The Crests, The Monotones, The Cadillacs, The Penguins, The Silhouettes, Harvey and the Moonglows, Maurice Williams and the Zodiacs, Frankie Lymon and the Teen-agers, and so on, and so on.

Just as in hip hop, white doo wop groups soon began to emerge. Groups like The Crew Cuts, The Capris, The Regents, Dion and the Belmonts and others. Like hip hop, doo wop was at first rejected by the mainstream music industry. This was before Motown, and there were no black record production companies at that time.

Syracuse had its share of doo wop street corner groups during the ’50s. SAMMY Award winner Bobby Green now plays R&B with his band A Cut Above, but he was one of the doo wop singers here in Syracuse back in the day. Only a very few of the singers who sang with Bobby are still with us today. I did learn from Bobby of a 1958 group called The Emeralds which included now Syracuse businessman Greg Tierney.

Some of the doo wop singers and those who became musicians (like Bobby Green) branched off into band music – mostly R&B. Bobby had a band called The Hi-Fi’s in which Bebo was one of the singers for a while. Bobby also had bands called: Breeze, Blue Beans and Greens, and he now has a group called Bobby Green and A-Cut-Above. Bobby has never left the music scene since he began singing doo wop in the 1950s, and his current band can still be heard in clubs around the Syracuse area. I think he really deserves those two SAMMY Awards I saw in his home during my visit.

– By Herbert Williams, a local musician and singer