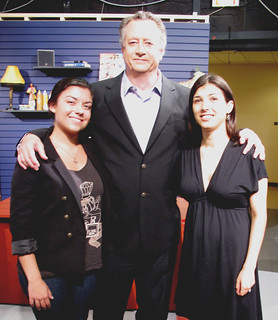 Ashley Kang, Syracuse University’s Community Newspaper Coordinator and The Stand Director, along with SU journalism student Sarah Taddeo appeared on WCNY’s Reith Show Monday, Aug. 27, to talk about the upcoming September issue of The Stand and a special magazine edition of the Near Westside Insider.

The pair discussed stories featured in the upcoming issue of The Stand, which is set to be released Saturday, Sept. 1. Taddeo spoke about the Strolling the South Side feature she wrote that focuses on Kirk Park and the newly formed Kirk Park Association.

Kang also spoke about a new outreach project Newhouse journalism students are assisting with — the Westside. Students in the recent Urban Affairs Reporting course, taught by The Stand founder and Newspaper Department Chair Prof. Steve Davis, developed a theme and series of feature stories to be published in a special glossy magazine edition of the Near Westside Insider.

Vox/Voz will be released after Labor Day and mailed to subscribers of the Near Westside Insider and distributed throughout the Westside. 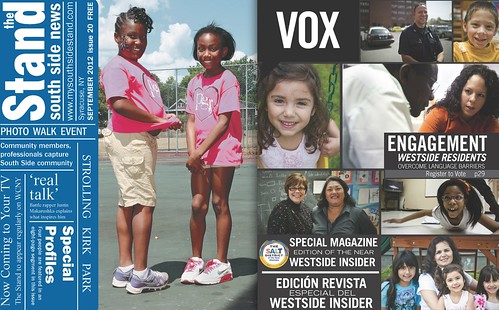 This special glossy magazine will come out in place of the regularly released Westside newsletter. The name — Vox in English and Voz in Spanish — reflects the theme of the magazine: Language. Vox meaning to amplify, and Voz meaning to raise one’s voice. The creators of the magazine wanted a name that reflected the theme and could be recognizable in English and Spanish. With similar meanings and pronunciations, Vox/Voz seemed to fit perfectly. To cater to the multilingual Westside community, the magazine was designed in two sections. One cover features all stories in English and if you flip the publication over, the same stories are printed in Spanish. Thus each language-reader can have their very own magazine to flip through exclusively.

This special issue also features a voting guide by Maarten Jacobs, the Near Westside Initiative Director, and a voter registration form. A goal of the magazine was to also encourage community engagement. One main priority was seeing Westside residents vote in the upcoming Presidential Election on Nov. 6.  Thus a voter registration is published in both English and Spanish in the magazine. Readers can fill it out and  post mark by Oct. 12 at the latest to be eligible to vote Nov. 6.

If you missed the TV appearance where the new issues were discussed, watch it below: