Onondaga County’s Save the Rain program hits the South Side

For Amatullah Yamini, improving the South Side with environment-friendly projects is the first step in revitalizing the area and attracting businesses.That’s why the South Side business owner puts such hopes on Onondaga County’s Save the Rain program.

“Beautification of the South Side is very, very important,” said Yamini, who owns the Salina Shoe Salon at 2809 S. Salina St. “To me, it’s one of the most beautiful areas of the city. So why not complement this area with the green infrastructure?”

The Save the Rain program, now in its third year, uses green infrastructure techniques such as porous pavements and rain gardens to capture storm water, said Program Coordinator BJ Adigun. The captured water run-off trickles into and mixes with the natural ground- water or is used to grow plant life, Adigun said.

Through these methods, Adigun said the excess storm water does not bounce off the asphalt surface and does not seep into the sewer system, causing what he calls “combined sewer overflow” that results in potentially polluted water flowing directly into Onondaga Lake. The Green Improvement Fund, which Adigun said supports the green infrastructure projects on private property, awarded Yamini’s store a grant to replace her parking lot with porous pavement that would absorb the runoff water into the soil. 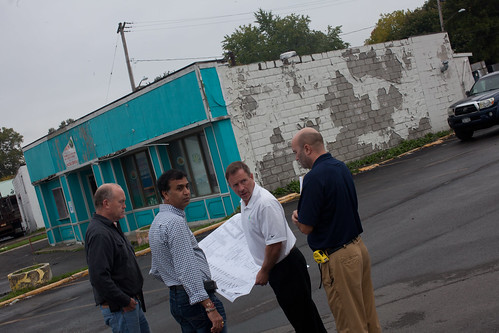 “I applaud Onondaga County for working with these concepts of saving the rain,” Yamini said. “Just to be able to demonstrate to the community and to young people that we have become innovative and found a way to save that rain water and use it for a very useful purpose.”

Yamini’s store, which she has owned for seven years, sells shoes and clothing for all ages and genders.

In 2008, Adigun said County Executive Joanie Mahoney created the Save the Rain program as a new way to prevent combined sewer overflow and find ways to capture and save storm water, and it was approved in 2009. Two years after the program started, the U.S. Environmental Protection Agency named Save the Rain one of the Top 10 green infrastructure systems in the country, according to an April 2011 EPA publication.

“We wanted to move away from a reactionary method and move toward a more preventative method,” Adigun said.

Yamini, who is also a senior management analyst for the U.S. Department of Housing and Urban Development, said she heard about the program at a meeting organized by the Southside Community Coalition and the South Side Initiative in November 2010.

Joseph Bryant, the initiative’s board president, said that South Side property owners who attended the meeting heard a presentation by National Systems Engineering. The presentation focused on the Save the Rain program, showing eligible properties and which grants were available.

After that meeting, Bryant said Natural Systems Engineering, which is the main firm used for Save the Rain projects, worked with properties along South Salina Street, including: Yamini’s shoe store; Factory Direct Furniture and Mattress at 2711 S. Salina St.; the People’s A.M.E. Zion Church at 2306 S. Salina St.; Deb’s Convenience Mart at 2419 S. Salina St.; and an empty lot at 2326 S. Salina St.

“It falls in line with the coalition’s mission to beautify the area,” Bryant said. “A lot of the improvements will include new sidewalks, trees and some sort of vegetation or brush, which makes the neighborhood look better.”

Naresh Patel, owner of Factory Direct Furniture and Mattress, said he also went to the meeting in 2010. After four years of trying to clean up his lot, which included taking down two billboards, Patel said he has a plan in place, through Save the Rain, to build a rain garden in his parking lot that will capture storm water. His plan includes tearing down a vacant building on his lot and planting shrubs at the edges of his parking lot.

“I’m trying to clean up the South Side,” Patel said. “Hopefully, others will do the same.”

Kyle Thomas, who owns Natural Systems Engineering and worked with Patel on the project, said he hopes the project at Patel’s lot will serve as an example for other South Side residents.

“The fact that he can do a storm water project there that satisfies the county, and they’re actually reimbursing it and also is improving the area and the aesthetics of the area is hugely important,” Thomas said. “That property, if we do it right, will be an asset in the area.” 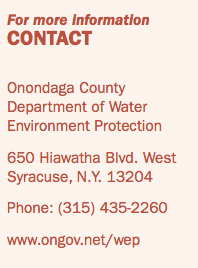 However, not all South Side properties are eligible, Thomas said. According to the boundary map outlining the county’s Green Improvement Fund, the target areas on the South Side run irregularly between East Colvin Street and South Salina Street, Onondaga Creek Boulevard and West Newell Street, and along South Avenue from St. Agnes Cemetery to Hillview Avenue.

If business owners think they are eligible for Green Improvement Fund grants, Adigun said they can submit ideas to be reviewed by a committee that makes recommendations for the construction. The committee then bases award money on the amount of storm water that can be captured by the project on a per-gallon basis.

Not only does the Save the Rain program capture storm water and prevent sewage overflow into Onondaga Lake, but it also invests money into communities and helps beautify them, Adigun said.

“We are transforming communities,” he said. “Being able to work with these folks and finding solutions for development projects improves property values and improves aesthetics around the community.”

Yamini said in order to make progress on the South Side, the environment needs change. She said she is hopeful these types of projects will beautify the area, attract new businesses, and inspire a community.

“Many people have not seen any kind of infrastructure work on the South Side that’s innovative,” Yamini said. “I think it helps open up minds and understand that it’s not a community that’s left behind.”