All On Her Own

Brenee Jones wanted a hair salon of her own, so she saved enough money to rent shop space.

After one year of careful saving, a Syracuse beautician realized her dream of opening her own hair salon. The skills she honed dressing customers’ hair at her home, she says, will now be put to use at her new business, the Brenee Jones Beauty Shop.

If the comments of one customer, Ival Vasell, offer any indication, Jones can count on good word of mouth to help her venture, located at 4720 S. Salina St.

“Everyone thinks I have extensions,” Vasell said. “My hair is so beautiful. I think she is doing a good job, and I would recommend her.”

Jones started doing hair in 2001 while in high school.

“I enjoy doing hair, I enjoy making people look pretty,” Jones said. She continued doing hair throughout college as she studied hair dressing in Maryland. When she moved back to Syracuse, Jones began working two jobs, in addition to her in-house salon. Jones said having the in-house salon became too much to handle, and a bigger space would allow her to be more efficient.

On Sept.1, Jones opened the beauty shop, after having saved enough money to rent space on South Salina Street. Jones said rent is $600 a month, but rent is not the only aspect to consider when launching a start-up business. 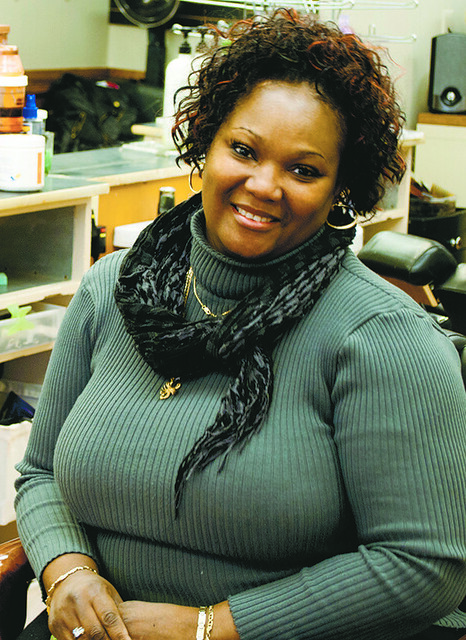 Jones found she was familiar with business start-up considerations. First, she had to obtain a business certificate from City Hall. “I was finally able to go through the necessary process and get my certificate,” she said.

Jones then began building her business. Bringing her original customers, as well as having them spread the word about her new salon, allowed Jones to have a strong customer base from the get-go. By providing her own funds, Jones was able to focus on things like customers and adjusting the shop to make it her own.

This is exactly what Jones said is the most rewarding part of owning her business. “Not having to bug anyone for money or borrow money from the bank, I am able to pay for it by myself,” she said.

Jones met Vasell when they worked at Loretto.

“Someone told me about Brenee and said she would do my hair, so I keep going to her,” said Vasell, who has
been going to Jones for six years.

Vasell lives on South Salina Street, which makes it convenient for her to get to the salon. Vasell often makes
appointments with Jones to get her hair washed and wrapped on Fridays.

Although Tutman confessed to trying another salon, she said it did not compare to her sister’s work.

“I decided to make the switch from my previous salon because Brenee’s salon was three blocks from my
house, she had flexible hours, she specializes in natural hair, and basically that is what I wanted,” Tutman said. “I didn’t want to be bothered with a lot of chemicals and stuff in my hair, and she did a lot of natural hair.”

Tutman also praised her for charging reasonable prices. Compared to other salons that charge up to $40 for a wash and set, Jones charges only $25.

Jones’ mission is to provide the necessary services for her customers and keep their hair clean and healthy.

“Whatever customers want, I get it done,” she said.