Tandy Leather Factory, a branch of a national chain and a South Side fixture for 26 years, is the only branch in the entire state.

“There used to be one in Rochester, Albany, Binghamton and New York City, but they kept the Syracuse one,” said Donald Sell, 29, Tandy Leather’s new manager. Sell was relocated to Syracuse three months ago from the store in Harrisburg, Pa. 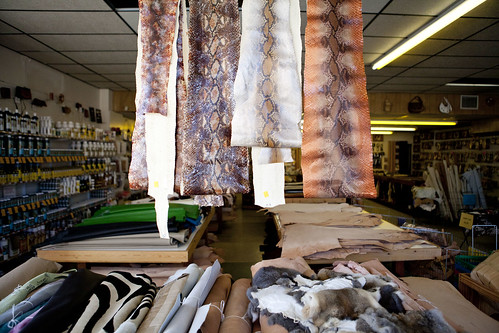 As a chain, Tandy Leather emerged from the merger of Tandy Leather Company and the Leather Factory, each specializing in leather products. When the two combined, the new company closed a number of its stores.

The Tandy Leather store at 4726 S. Salina St. sells leather, some of it in do-it-yourself kits, but does not make leather products.

“We don’t actually make anything in the stores,” Sell said. “That’s why we have our kits that are designed to be purchased by our customers, so they can make their own belts, handbags and anything else they see in the store that they want to design themselves.”

Jess Wartooth, 27, an employee at Tandy Leather, says people don’t tend to think about leather crafting as a hobby. “Most people who come in either think we sell leather coats, cowboy hats or cowboy boots,” Wartooth said. “I think as far as leather crafting, it’s not something people consider because most might think of knitting or doing something with textiles and clay, before even thinking of leather,” she said.

Betsy Robson, 48, a customer at Tandy Leather, said she feels that more community members should be aware that this store is in Syracuse. “More people should take the time to step inside Tandy Leather because it would enhance people’s imagination as they get to work with something totally different, like leather, and make gorgeous crafts like I have in the past,” she said. Robson has made leather jewelry and plans to purchase more leather pieces to work on in the near future.

Wartooth, who has worked at Tandy Leather since October 2007, said she has learned much about the product.

“I worked at a grocery store before this, and since I’ve been here, I get to build my own knowledge on leather — which is interesting — on how it’s made, how it’s used, and I get to educate people who come in because a lot of people don’t know the number of things you can do with leather,” she said.

The store sells a variety of kits that customers can purchase. “We have kits for all skill levels,” Wartooth said. “From a little coin pouch to a mini saddle.”

The kits come with precut leather but crafters are free to make their own designs and to dye the leather. The pieces of leather are pre-punched along the edges so they can be laced or stitched. Kits also come with two needles and a fair amount of wax thread or lace. 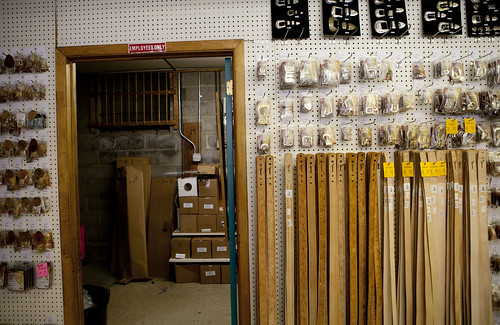 The most popular item in the store is belts.

The starting price for a belt is $11 and can go up to $25. This price is only for the leather belt, without any pre-punched holes, buckles or designs. There are different design pieces throughout the store, such as 3D stamps, that range from hearts to horses that customers can purchase to make their own design on the belt.

“These belts that we sell will last a person years and years because you can see the quality of the leather and its durability,” Wartooth said.

Most of the store’s revenue comes from clients placing orders over the phone.

“We don’t get a lot of walk-in customers, so our big orders are phone customers and online because we aren’t close to everyone, so it’s easier to call than to have to drive to us,” Sell said.

Other Tandy Leather stores located around the country, such as in Houston, get their revenue from customers who walk into the store every day.

Meredith McBean, who has worked with the company for eight years and is the current store manager in Houston, has noticed revenue coming in from walk-in customers.

“This is a new store in a new location, and although we have been open for a year and a half, we are still keeping up with the other stores around the country, by the amount of sales we make with people who just walk in to our store every day,” McBean said.

Tandy Leather in Syracuse has been able to keep its profits up this year without having a lot of customers walk in to their store.

“The economy hasn’t affected our company or this store here, as much as you would think,” Sell said. “Most of the stores are making good money, and it hasn’t been as bad as it could have been, especially since a lot of businesses around the country have closed because of the economy.”