Minority contractors in Syracuse, mostly on the South Side, are banding together to improve access to training and certification programs and to demand more work on private and government contracts. But they face an array of stiff challenges, including shortcomings in expertise, funding and networking.

Shawan East, president of the environmental consulting group East Environmental Group, estimated that fewer than five percent of contracts in Syracuse go to minorities and said the effect is not just economic, but also social.

Minority contractors say they face a battery of obstacles in landing jobs. One of the most prominent is in forming relationships with project managers and other influential people, said East, who spent 10 years with the East Syracuse engineering firm O’Brien and Gere before starting his own company last year.

One way to find them is through the Central New York Minority Contractors Association, a 17-person trade organization of which East is a member. The association puts on training seminars for its members on subjects like LEED, governmental safety standards and lead and asbestos removal. LEED, which stands for Leadership in Energy and Environmental Design, is a standard for green buildings.

“It was too small of a spigot for all this to flow through, ” said Paul Driscoll, Commissioner for Syracuse’s Neighborhood and Business Development. “We felt contracting out would bring more resources to the table.”

The city is also considering abandoning its own certification process and just using the state’s standard, removing a layer of red tape for contractors, Driscoll said.

Another obstacle for minorities is financing and bonding. Most standard construction agreements require a contractor to provide a bond for the entire cost of the project, even if it is only performing a fraction of the work, East said. This makes it difficult for some minority contractors to get work.

“If a minority is getting less than 10 percent of a project, his bonding capacity should be for what he’s getting, not what’s required for the whole project,” East said.

Driscoll said the city does not plan to change its bonding requirements.

Independent from the Minority Contractors Association, the Syracuse Cultural Club, founded in April 2009, also provides training and connections to contractors on the South Side.

“The effort is to get enough people certified so that we can knock on the door one day and say, ‘Why do you have seven lead contractors, and nobody who looks like us doing all the work on our side of town?’” said Pierre Lawranson, a construction coordinator for Syracuse Model Neighborhood Corporation and the president of the Syracuse Cultural Club.

The Cultural Club, about half of whose 30 members are contractors, is dedicated to sharing information about upcoming jobs and training sessions, said Lawranson, a carpenter by trade. 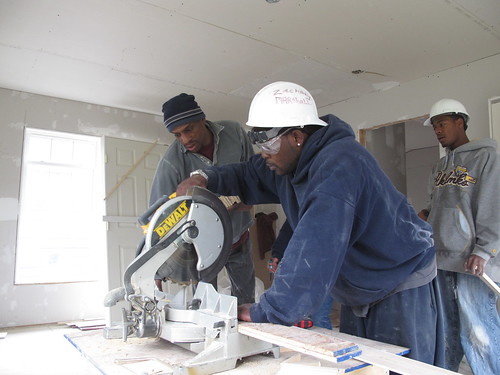 With a similar goal of employing as many minority contractors as possible, the Minority Contractors Association and the Cultural Club have joined together to do a residential housing project in Midland, Lawranson said. The project will take place over the next couple of months, they are currently in the planning stages of the project, he said.

Theardis Martino, a former general contractor, current president and CEO of the construction consulting business Matawon Development Group, has spent the last 13 years teaching business skills. He will begin a new nine-week contractor-training program this month. The biggest problems facing minority contractors, he said, are a lack of capacity and opportunity.

“In order to become tried and proven, you need to have steady work of some substance,” Martino said. He added that the construction season in upstate New York is very short, causing some contractors to try and fit too much on their plate during the summer. This in turn keeps them from completing some projects.

The planned Syracuse School District renovation, tagged at $137 million, is expected to create a contractor feeding frenzy, and minorities are angling to get a fair share. The project labor agreement requires specific levels of participation by minority and female-owned businesses, and Lawranson hoped it would be a springboard for more and better opportunities.

“Every one young man we take off the corner is one less to shoot you as you drive by,” he said. “If we can get these young men off the streets and learning trades … there might be hope.”