Two local designers use their personal styles to instill confidence

Ever thought about making clothes, but were scared of what people might think of the style? I would say go for it. Be a fashion designer!

There are many people in Syracuse who make clothes, and it started with a dream and conquering their vision. Two people in particular, Ron Funderburg and Tommi Billingsley, both Syracuse natives, are designers making their mark with appealing clothes that are trending in this town. These two have different bold styles for men and women of all ages and sizes to bring individuality and self-assurance to people who wear their designs.

Tommi Billingsley, founder of Flygirlshhh, is not only a fashion designer. She also is one of the most humble women I know. Tommi’s brand started as an idea in April 2013 and launched into full motion by May 2013. 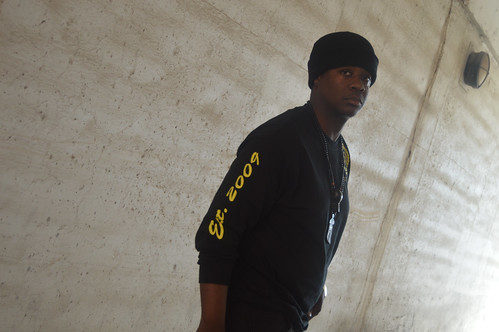 Ron Funderburg is the founder of Unico Re’ clothing line, designed mainly for men.

Ever since Flygirlshhh surfaced, she has been a community icon. Her line features dresses, T-shirts, shorts, jewelry and other designs for women. Soon customers can purchase shoes as well.

Tommi’s reason for creating Flygirlshhh is because she wants all women to look great and love themselves, especially those with low self-esteem.

Tommi is dedicated to bringing back humble confidence in women by helping those who feel they don’t know how to dress. She wants them to be able to pick out an outfit and feel like a queen.

Even if women don’t always feel like they are fly — meaning feeling wonderful about their appearance — she wants to give ladies the opportunity to look and feel fly inside and out.

“Flygirlshhh is a sisterhood and lifestyle, not just a clothing line,” Tommi said.

At first this talented designer didn’t think she would make a great impact, but she has stayed consistent and true to herself and continues to make women feel beautiful and confident in her community. The clothing line Tommi created is for all women of all sizes.

Tommi wants not only women in Syracuse to wear her products, but also women all over the world.

Advice Tommi wants to share to those who are considering being fashion designers is to have a plan and put that plan into action.

She advises: “Find out your market, know exactly what it is you want to present, as well as have love and passion for your craft.”

Even with discouraging times, she said people have to have faith and believe in themselves.

God will lead you in the right direction,” she added. “It will not be easy, but keep going and never give up.”

Her intentions are to make women know that no matter what society thinks of your color or size, all women are fly.

“I am not my clothes,” she said. “I am not my hair. I am me. A mother who is loving, caring, compassionate, trustworthy and works hard.”

She is and always will be a fly girl.

Early on, Ron’s mother noticed his talents with arts and crafts and his love for fashion. She encouraged him to follow his passion.

Ron started in Syracuse by designing mainly for men — elegant, urban and casual clothes, such as customized jackets and T-shirts. He is now pushing his brand not only in Syracuse but also by networking his creations in other countries.

“I’d like to build my own empire with music and fashion and self-to-self networking,” he said in a 2011 article featured on Syracuse.com.

In 2011 he also completed an internship with Bad Boy Records, where he learned from his mentor and celebrity Sean Combs that you have to learn everything for yourself and not expect anyone to do things for you.

“I learned from a great teacher that gave me the ability to teach others wanting to do the same thing,” Ron said.

The best advice Ron can give anyone who wants to be a fashion designer is to do whatever it is you want to do.

He also has a lot of community support because of his hard work. He has organized many fashion shows.

Ron not only creates fashions, but he also is a motivational speaker. He speaks to youth as a positive male role model in a community that is plagued with violence.
His influence gives young men and youth hope that they can do what they want to do and stay out of trouble.

This unique king has made his mark, and there is so much more to come.

— Article and photos by Tamara Reese, The Stand community correspondent