The Southside Community Coalition is nearing the end of its design phase for the planned Food Cooperative to be constructed on the South Side, expecting to break ground in mid- to late April. 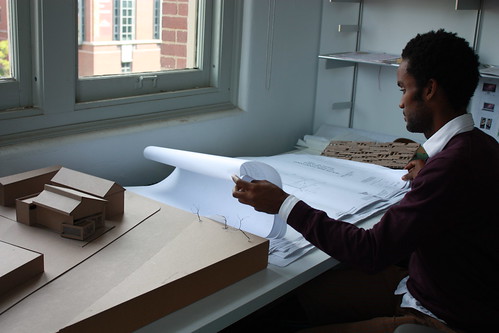 South Side residents have been struggling for access to fresh produce since Valley Plaza’s P&C closed in 2009. Several neighborhood organizations, such as the SCC, are working on community alternatives. Among them are Jubilee Home’s Grocery Store Project and urban farms.

“It’s going to have a huge impact and a very important presence,” he said. “It can be a catalyst for a whole new way of looking at construction in the neighborhood.”

The food co-op will reside next to the South Side Communication Center located on the corner of South Salina and McKinley streets. -- Lena Budd, Staff Photo

Located next to the South Side Communication Center at 2331 S. Salina St., the food co-op will have a main floor with a café and a mezzanine with offices, based on Cooke’s designs. He estimates construction will take four months.

The café will allow for a third party to lease out the space, with hopes that another member of the community will have an entrepreneurial opportunity, Cooke said.

Joseph Bryant, president of the SCC, said the design phase is about 80 percent complete and should be finished by the end of October. The SCC is in partnership with Syracuse University’s South Side Initiative.

With an emphasis on community participation, the food co-op encourages resident ownership and involvement. Each member would pay $100 for his or her participation, and there currently are 17 member owners who are interested, Bryant said.