The historic 104-year-old church at 711 E. Fayette St., the former home to People’s African Methodist Episcopal Zion Church, will be renovated and turned into a cafe and culinary school. The project organizers said they hope this is a good way to serve the community and the economy, while also saving the deteriorating building from destruction.

The Rev. Daren Jaime, the pastor of A.M.E. Zion Church, said that the congregation agreed to sell the building and move to a new location at 2306 S. Salina St., but that many people and groups did not want to see the building go. 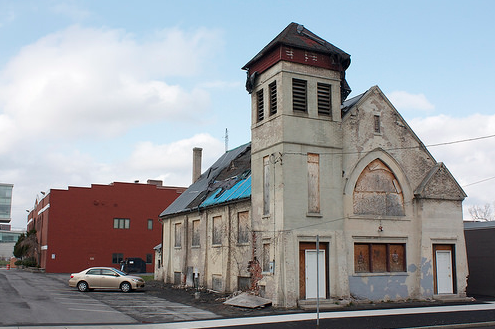 A cafe and culinary school are planned for this former church building on East Fayette Street. | Megan Callahan, Staff Photo

The People’s Community Development Corporation, of which Jaime is the president, is the current owner of the Fayette Street property.

“If we were going to save the building, we wanted to do something that would also benefit the community,” Jaime said.

The building will become home to Benediction Cafe, where community members can eat, and a culinary training program for youth and adults. Jaime said the school will be fully accredited, and that it would give anyone in the community who wants to cook the tools to do so.

“Everyone sees these shows on TV — like ‘Top Chef’ and ‘MasterChef’ — but not a lot of people know how to get to that point. This is a vehicle to make it in the food industry,” Jaime said. He also said he thinks this could lead to good jobs that are “not just minimum wage” for the students, and that they could make a living from it.

The new building will also maintain the history of the church and the community, Jaime said. Organizers hope to restore old artwork in the building, as well as the original stained glass windows. There also will be historic pictures of the church on the walls so that people can experience the building of the past. 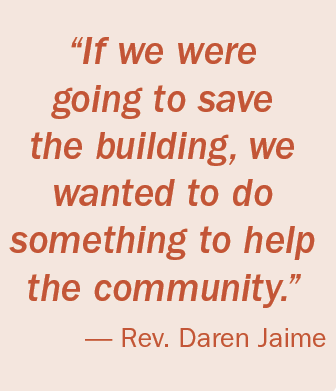 The project has received two separate $250,000 grants – one from State Assembly member Samuel Roberts of the 128th District, and one from the Central New York Regional Economic Development Council, one of 10 regional councils created by the state government to develop economic growth in each of their regions. Jaime said there will be more fundraising for the project.

A few years back, members of the community and church members who did not want to see the church destroyed formed the Save 711 project. According to their website, the building was built around 1910 and is one of the oldest buildings in the 15th Ward. The A.M.E. Zion Church is also the oldest African-American congregation in Syracuse.

A few months ago, the Save 711 project and Benediction Cafe project became part of a larger project, the People’s Community Development Corporation. Jocelyn Bowen, vice president of the organization, said the organization is a separate entity from the church and is focusing on revitalizing the church at 711 E. Fayette St. The group hopes to begin construction this summer. 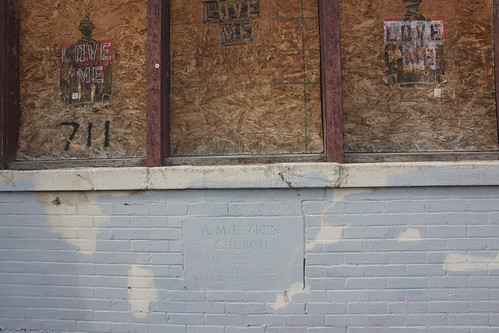 The 1910-11 AME Zion Church is the oldest standing African-American church building in the city of Syracuse. Although in deteriorated condition, the building stands in its original location at 711 E. Fayette St., with original interior and exterior details | Megan Callahan, Staff Photo

Bowen said they are writing grant applications for Benediction and other projects in the area. “Our main goal is to develop our community on the South Side. We do that through getting these small businesses the opportunities and resources they need,” Bowen said.

Juanita Sales, who is with the Save 711 project, said the first thing she and others did when starting out was to interview those whom the change would affect to get their perspectives.

“Many of them had raised their families in the church, and it is hard when something like that is taken away,” Sales said. “They wanted to preserve a piece of their culture for future generations.”

Sales said she thinks the historical parts of the project are important because kids growing up today don’t get to see the black businesses and cultures in the 15th Ward that once existed.

“I just hope and pray that it does show that there were blacks in the 15th Ward, and that this is something that can maintain that history,” Sales said.