Bennie McDonald says he runs his company the way he was trained to act in the military — with structure and discipline.

“The difference between myself and Bill Gates is that he makes more money than me, but I have to have the same structure set up,” said McDonald, president of BMD Snow Removal & Grass Cutting, Inc., who incor- porated his lawn maintenance business in February 2009 with the help of the Entrepreneurial Assistance Program. 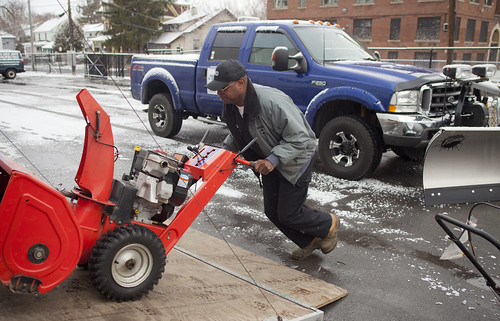 Bennie McDonald of Syracuse loads equipment into a trailer. McDonald founded a snow removal and grass cutting business three years ago with the help of a business incubator and program through Syracuse University. --Photo by Brandon Weight

Joanne Lenweaver, director of the Women’s Busi- ness Center at the South Side Innovation Center, said the Entrepreneurial Assistance Program is “the next step for entrepreneurs as far as making them legitimate in the marketplace, knowing where they might advance in the next level of growth. That’s the level, the barrier, that a lot of young entrepreneurs get stuck at.”

McDonald said the entrepreneurial program “helped me go forward with my business.” He credited the program with enabling him to receive certifications such as one for the state Minority- or Women-owned Business Enterprise and one for federal Disadvantaged Business Enterprise. These help him to find resources and bid for contracts. “That makes me feel like my busi- ness is legitimate,” he said.

Although he landed several residential contracts before he discovered the South Side Innovation Center through an acquaintance, he realized his business needed a professional boost to remain competitive in the long run.

So McDonald, who graduated from Utica high school in 1977, enrolled in the program’s classes. He studied employee handbook writing, accounting, public speaking, and accounting software QuickBooks, he said. McDonald spent 60 hours learning how to manage his finances, secure financing, and market his business.

A cost analysis through QuickBooks revealed that commercial contracts were more profitable than residen- tial ones, so McDonald deals “more on the commercial side” now, he said, adding that outside of Syracuse, he has contracts in Albany, Binghamton and Rochester.

McDonald invested $110,000 of his own savings to buy two trucks, lawn mowers, computers, a navigational system and other equipment needed to cut grass and remove snow, the Empire State Development website says. He said debt often compels a business to take on jobs it otherwise wouldn’t, and he did not want that for his company. 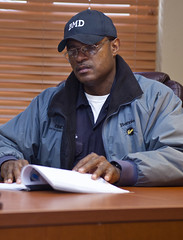 Bennie McDonald learned to use software such as Quick Books to maximize his profits. --Photo by Brandon Weight

“I purchased all of my own equipment, so I wouldn’t have to owe anyone anything,” McDonald said.

Bob Herz, director of the South Side Innovation Center to whom McDonald submits financial reports, said McDonald has made smart business moves, focusing on banking, corporate and governmental clients, where the travel time expenses are lower and potential yields are greater.

“His major barrier to growth right now is finding qualified associates whom he can assign jobs,” Herz said. “He is a very organized man, and will undoubtedly find the right people.”

The lawn maintenance business employs four people during the winter and two to three during the summer, McDonald said.

As president of the company, McDonald said he has some control over his schedule. In the end, his leadership will affect his business, so it’s in his own interest to keep it afloat, he said.

“If I feel like I don’t feel like going to work a particular day, I won’t go. I’m in charge of the actual company itself,” McDonald said. But, he added, “I still have to abide by certain rules and regulations to be in business.”

Besides an office, parking and storage space at the South Side Innovation Center, the Entrepreneurial Assis- tance Program offers McDonald a hospitable atmosphere where he can share ideas with other startup company associates. McDonald can also discuss business ideas and “let off some steam” with professionals at the South Side Innovation Center, Herz said, citing himself as one.

“Remember, for an entrepreneur, every day they are doing something they have never done before,” said Herz, who described McDonald as willing to learn what he does not know. “Being open to their needs is as important as rigorous training and counseling.”

Modest success often closes a mind, but in McDonald’s case, it opened one and kept it receptive to new ideas, said Herz, who characterized McDonald’s leader- ship style as demanding and knowledgeable.

“What I think of when I think of Bennie is of some- one optimistic, with an organized mind and determined ambition,” Herz said.

One day, McDonald would like to mentor someone who would take over the running of his business, but he said he would like to remain involved, perhaps as a board member.

In Herz’s opinion, McDonald “sees what the future can be and understands how to get there — sometimes in detail, sometimes generally — but always with a determination.”