The Art of Baking

The air smells of freshly baked bread, chocolate chip cookies and buttered Italian rolls. There are startling sounds of metal clanging as Rob, one of the bakers, transfers 250 bread loaves out of the oven and into metal racks where they will cool before being packaged.

It is the oven that sets this little blue Brighton Bakery on East Brighton Avenue apart from other bakeries in Syracuse. Not only is it an original brick oven, but it is also the same oven that was used when the bakery was opened 85 years ago in 1928.

The oven is made up of 40,000 bricks that are always kept at a temperature of at least 375 degrees. The oven is a testament to historical fuel changes, starting with coal, then converting to oil, and now using natural gas. Everything that is baked at Brighton Bakery goes through this brick oven.

The bakery has belonged to Syracuse native Mark Stefanski for 20 years and has been in his family for three generations, beginning with his grandfather, who when he passed, gave it to Stefanski’s mother and her three sisters.

Stefanski is dressed casually in jeans and a t-shirt as he passionately explains in depth how everything works in the bakery. As an expert, he knows every detail of each machine, exact recipes for more than 40 baked goods and how many of each to make on specific days of the week.

Baking is an art in the Stefanski family. It’s not opening a Betty Crocker box and following the instructions. Stefanski has his baking technique down to a science, a skill that has been passed down through his family for years.

“You have to understand the consistencies of the bread dough and how it changes with the seasons,” Stefanski said. “The same with the cookies and the other baked goods. We have our own original family recipes and everything here is homemade, from scratch.” 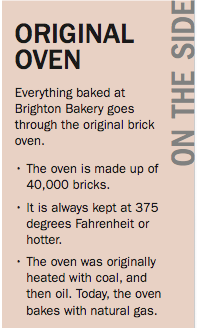 But it also bakes and sells other items daily, such as their famous homemade chocolate frosting brownies and an assortment of cookies, doughnuts, pies, sheet cakes, and turnovers. The bakery sells its giant cookies at 75 cents a piece or three for one dollar. Doughnuts are 50 cents each, and Fry cakes (peanut/chocolate frosted) are 75 cents each.

Stefanski said that now days, with machines, they are able to make 200 dozen doughnuts in just an hour, a task that used to take 5-6 hours when everything was handmade.

The bakery staff of just four people, keeps themselves busy with open hours of 7 a.m. to 10 p.m., seven days a week.
A normal day starts with early morning baking at 7 a.m.. Then deliveries are made from 8 a.m. to 11 a.m., and for the rest of the day the staff serves customers that come into the store. At 7 p.m. the baking begins again when it is time to put the bread dough into the oven. The bread loaves will be delivered to his wholesale customers the following morning.

It is a continuous cycle. So much so, that baker Robert Hayes, who has been working for Brighton Bakery for 14 years, says he no longer eats the things he bakes anymore.

Stefanski began working for the bakery when he was attending Central Technical High School. He and five of his friends would work just so they could make enough money to take girls out on dates. Stefanski worked at the bakery with his family until he decided to attend Syracuse University and study to be pre-med.

However soon after, the bakery experienced major setbacks when Stefanski’s father was diagnosed with throat cancer.

“What happened was my father got sick, and it’s hard to find good bakers around here. So I dropped out of SU to come and work at the bakery,” Stefanski said. “He passed away two years after that so I tried to go back to school but by that time I didn’t really want to. So then I just stayed at the bakery.”

It was shortly after then that Stefanski’s mother got sick and the bakery closed down in 1987. The bakery remained closed for five years, with many potential buyers but none of them going through with their purchase.

Then in 1993, Stefanski decided to take his savings, purchase the building from his mother and her sisters and reopen the bakery. Because the bakery had been closed for five years with no heat, it was a chore for Stefanski to get the bakery back into usable shape. He had to purchase new appliances such as a grease trap, to reach the new health and safety regulations that had accumulated during the time the bakery was closed. Everything came out of his own pocket. The task of getting the bakery into usable shape took him six months of hard labor cleaning and repainting the building from top to bottom.

Stefanski worked in construction during the five years that the bakery was closed. He said it just felt right to reopen the bakery because it had been in his family for so long, and held so much of his family’s history.

Stefanski admits one of the reasons he worked so hard on reopening the bakery was because people believed he couldn’t.
“People didn’t believe I could get it going again,” Stefanski said. “I felt challenged by this and it made me work harder. I’ve been making it work for 20 years now on my own since I bought it. I felt challenged and met that goal.”

When the bakery was finally in shape to be reopened, many of the its longtime, loyal customers came back to get the homemade baked goods they had missed, and business started up again.

Stefanski, half Italian, half Polish, has pulled many of his recipes from his Italian heritage, such as his pizza dough, Italian bread, and cannolis. Stefanski’s mother, an Italian immigrant, originally met and started dating his father, when he came to Syracuse from Pennsylvania to work in Brighton Bakery.

“They started dating when my father began working here at the bakery,” Stefanski said. “I don’t know how they did it working together every single day. And even after they got married they continued to work every single day with one another!”

While the bakery has been open and running again for 20 years, it doesn’t mean that it has been smooth sailing for Brighton Bakery’s business. There is always a demand for pizza dough and bread, but the bakery has to carefully decide what other baked goods to make depending on the time of the year.

“The food business is a competitive one because people’s taste is always changing.” Stefanski said. “People don’t like to eat donuts in the summer when it’s hot out. But in the fall when it’s colder, closer to Halloween time, people buy double the amount of doughnuts as they do in the summer.”

A recent occurrence, that has impacted the bakery’s decision on what items to sell, is the trend towards healthier eating. Stefanski said because people have become so weight and body conscious, they have had a hard time justifying buying boxes of doughnuts and cookies like they used to.

The bakery has tried to address this by making gluten free items, getting rid of many peanut baked goods (due to peanut allergies), and making more of the “lighter” items such as cookies and glazed doughnuts.

However, that hasn’t stopped the loyal Syracuse residents that have been coming to Brighton Bakery for years.

“I’ve been coming here my whole life,“ said Kurt Acker, a Syracuse resident said, walking out of the bakery with a box of assorted doughnuts. “I used to pick corn at a local farm and we would come here every morning before we went to pick the corn. If you got a sweet tooth you should stop here.”

“We actually just had a law student who graduated 5 years ago come in,” Stefanski said. “He said he was visiting family in the area and that he now lives in California. He used to come into the bakery all the time, and said that he just had to make sure he stopped by before he left.”

“The whole environment is what makes this place special because it’s all family.” Said Sallie Guyder, 41, a helper at the bakery. “I love the neighborhood people, everyone coming here is like family.”

Guyder, who grew up in Oswego, said that Syracuse families have been coming to the bakery for generations including her own. Guyder, who lived on a farm, said her father would always come down to the bakery to pick up leftover doughnuts and bread. The Stefasnkis would give her father a bucket full of doughnuts thinking they were being fed to the pigs. But Guyder joked that it was her and her siblings that would end up eating all of the baked goods that were brought home.

She explained that it is more than the delicious baked goods that is keeping Brighton Bakery in business after all these years.

“Mark makes this place special too,” she said. “He knows how to talk to people and he has a nice personality. People don’t just come in for a doughnut. He’s like the local barber. He is what keeps the people coming back.”