Corcoran High School was removed recently from New York state’s “priority school” list for schools with low graduation rates. Corcoran improved its graduation rate because more students passed the state’s Regents Examinations, which they must do to graduate. 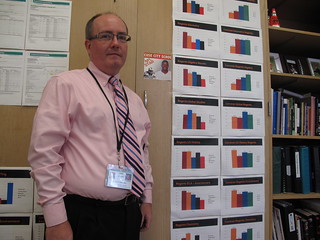 Cosgrove and Murphy implemented a series of interim tests to determine whether students were learning these concepts, Murphy said, and the plan worked. Corcoran’s graduation rate rose from 57 percent to 67 percent, good enough to get taken off the priority list, according to Paulette Coppin of the New York State Department of Education. Any school whose graduation rate is below 60 percent winds up on the priority list.

Corcoran students were failing the Regents Exams for a simple reason, Murphy said.

“The work in classes did not correlate to the exams,” he said. In 2010, only 26 percent of Corcoran students who took the Algebra Regents Exam passed it. But 82 percent of those students passed algebra.

“Step one is clearing up the data,” said Dan Lowengard, former superintendent of the Syracuse City School District who oversaw the changes at Corcoran. “You have to know where all … kids are academically.”

That’s what Corcoran began to do in summer 2010, a few months after it was first put on the list. Cosgrove said he was shopping in Barnes & Noble when he saw a book that caught his eye. It was Paul Bambrick-Santoyo’s “Driven by Data: A Practical Guide to Improve Instruction.” In the book, Bambrick-Santoyo, a veteran school administrator, advises schools to track everything with data, from test scores to student participation in class.

Cosgrove showed the book to Murphy, who passed it around to the entire administrative staff. It became the basis for the school’s new data-driven method for tracking academic progress. 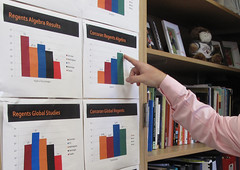 “This data book was the big rock,” Murphy said. “All of our decisions are based on data. Like where do kids stand academically? Even attendance data and behavior data were part of the equation.”

The first initiative Cosgrove and Murphy undertook was to implement the interim tests. They started giving four tests in each subject during the school year. After each test, Corcoran teachers made flow charts highlighting which questions gave students the most trouble. The teachers then re-taught those lessons in their classes and put similar questions on the next test. So class material prepared students for the interims, which prepared them for the Regents.

By focusing material on statewide exams, it might appear that Corcoran is “teaching to the test,” a phrase implying a priority shift in how students are taught.

But Sally Fisher, Corcoran’s math coach who tracks data in math classes, said Corcoran is not teaching to the test because it does not fire teachers or administrators based on interim test scores.
“The data is only used to inform their instruction,” Fisher said. “So there’s really no incentive to have our kids do well on interims that we created.” 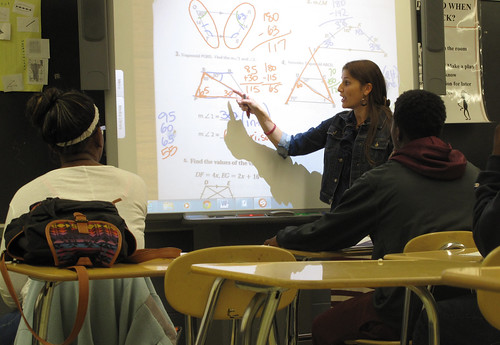 Fisher also said that teaching to the test means that teachers are emphasizing procedural skills and objective knowledge, which Corcoran and New York state are no longer doing. “New York’s Common Core has shifted its emphasis from procedural skills to critical thinking, which I think is a big shift,” Fisher said.

Corcoran’s data-driven, interim-testing program has been so successful that Murphy wants to apply it to other areas, such as behavior and attendance.

“We have decided that we are going to do what’s called B.A.G. checks with kids,” Murphy said. “Behavior, attendance and grades.”