After students experienced a long day of state testing at Southside Academy Charter School, principal Delvin Vick decided to give them a reward for their hard work. While the students in third through eighth grades spent the afternoon preparing for the next morning of testing, Vick walked the halls handing out ice cream in classrooms.

Although he was giving them treats, Vick was just as capable of showing another side.

“Now be thankful,” Vick told the students. “If you complain, I’ll be happy to take it back.”

This spring marked the close of Vick’s first year as principal at Southside. As he left one classroom for another, stopping to offer a “Hello” to a student along the way, he was quick to point out to a visitor the essence of his experience so far: “The job doesn’t stop.”

Vick said he made the move north because he and his wife, Alesia, were looking for a change in location.

“I applied for a couple of jobs out of state and found a school that would be a good fit,” he said of Southside.

He said he thinks the school, which serves 682 students from kindergarten through eighth grade, matches well with his administrative style, which he describes as personable.

“I like to put my students first, and have a family-type atmosphere with parents,” Vick said. “But at the same time, my mindset coming from the public school system is, ‘Let’s get it done.’ ”

Jonathan Dell, the manager of school culture at Southside, said Vick does a good job of maintaining high standards for everyone and communicating them clearly. 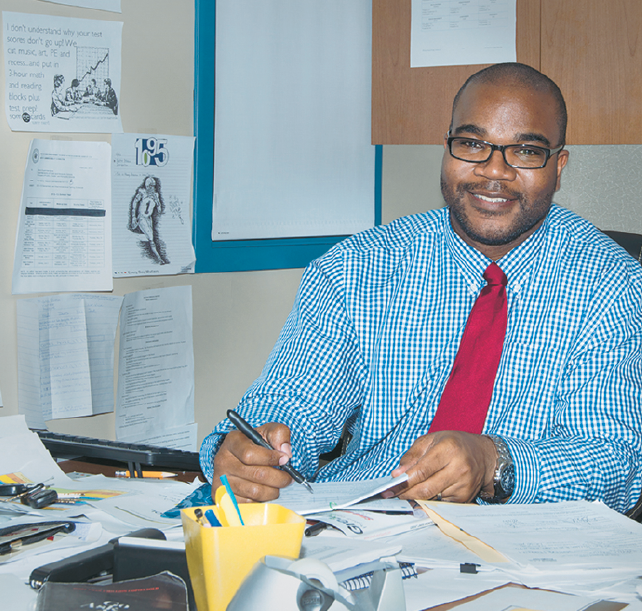 “He keeps everybody informed. He lets us know what he expects out of us.”

Kathy Parker, a kindergarten teacher at Southside, said Vick keeps up with the school’s rapidly changing expectations. She said their superiors at National Heritage Academies, which manages a number of charter schools, including Southside, are constantly suggesting changes.

“He is a man who’s in a hundred different places,” Parker said of how Vick responds. “If you need him, he’ll be there for you.”

Sarah Zolik, another kindergarten teacher, agreed, saying Vick has learned how to deal with a wide variety of challenges on the fly.

“He’s getting better at multitasking. That’s something he always has to do,” Zolik said. “As a principal, you have a lot going on, but he handles it very well.”

Vick is a native of Zebulon, N.C., just outside of Raleigh, and he has spent most of his life in the state.

But he got his start in education overseas, in Japan. A former professor of Vick’s at East Carolina University, his alma mater, introduced Vick to the Japan Exchange and Teaching Programme, which promotes cross-cultural relations between Japan and other countries through foreign language education and international exchange activities. In 1999, Vick was accepted into the program; he spent the next two years teaching in Shijonawate City.

His trip to Japan marked the first time Vick boarded an airplane.

“I had a lot of preconceived images of how Japan was, people walking around in kimonos, doing martial arts,” he said. “But it’s very modern, like the United States. People are working, trying to feed their families.”

He had a rough time adjusting at first, and he considered going home after a few months in Japan. But he stuck it out with help from his friend, Steve McGowan. McGowan, a fellow North Carolinian, from Greensboro, owned a teashop near Vick’s home in Japan. The two bonded over their home-state connection, and McGowan took Vick under his wing, having him over for dinner often and showing him around the city.

“The mailbox in the front yard wasn’t enough,” Reggie said. “He’d see past that. He knew the world is much bigger than what he grew up in.”

Reggie added that just making it to Japan was a testament to his brother’s character.

“He does what he says,” Reggie said. “He said he was going to Japan to teach, something nobody in our family considered, and he did it.”

Vick showed this determination even as a young teen. “If he wanted to play basketball, he was going to play whether it was across the street or across town,” Reggie said.

Vick ended up loving Japan so much, he and his wife considered moving there shortly after getting married in 2003. He had a job offer, but Alesia was accepted into law school, so they decided to stay in North Carolina.

“I still have Japan in my heart. I dream in Japanese,” Vick said.

Vick said he admired the style of education in Japan, where he says there is a greater emphasis on the quality of the material taught instead of the quantity. He has tried to bring this approach back home with him.

“In Japan, their work ethic is second to none. They teach less, but in more depth,” he said. “We cover a lot of content, but they teach at a level that the kids really understand. That’s what we’re trying to do here.”

Vick originally outlined his style and approach through his education blog, “Not so ‘new’ principal’s post,” where he discussed how he thinks schools should be run and how educators and parents should treat children. Although he hasn’t updated the blog in nearly a year, Vick said the messages he wrote are still relevant and show others how he thinks.

“When you work with a group of people, you can’t always sit down, tell them about yourselves,” he said. “People say, ‘It’s not what you say, it’s what you do.’ But sometimes, it is what you say.”

Vick said the blog helped especially because of his job as principal, which he said is lonely at times.

“It gives the job an added dimension. People don’t know what I do all day long. The principal’s job is to lead and set the culture of the school,” he said.

This June, Vick and his wife will celebrate their 10th wedding anniversary in Buffalo, where the next day they will participate in a Color Me Rad 5K run along with some Southside faculty. The event adds a vibrant twist to running: Participants dress in white and are then hit with paint along the way.

Vick said he and his wife have been working out regularly since February. They’ve also been eating healthier. Vick gave up “Makudo,” Japanese for McDonald’s. In that time, Vick said he’s lost 45 pounds. He weighed nearly 300 pounds when he started.

“I was tired of being tired,” Vick said. “Now I like working out because it gives me energy to work here.”

After returning home from Japan, Vick spent the next 10 years in the Wake County public school system. He began teaching third grade at Fox Road Elementary. When the school principal moved to Dillard Drive Middle School a year 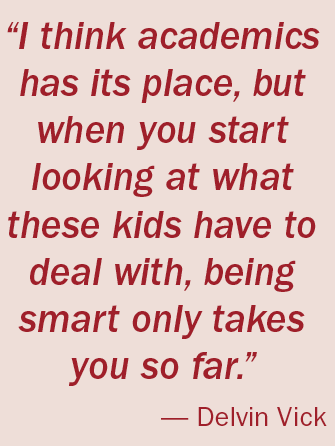 later, Vick followed him and taught social studies and drama while also coaching football for two years. But he missed teaching at the elementary level, so he landed at Forestville Road Elementary, where he taught fourth grade for a year.

He decided he wanted to transition from teaching to administration.

“My dream was to teach for the rest of my life and become the best in the world. But once I had a family, I looked at the pay scale and decided to pursue a degree in administration.”

He recalled what he went through while his wife completed law school. Vick worked multiple jobs, delivering newspapers, working in a liquor store, designing websites and selling insurance. Because of all the odd jobs he worked to make ends meet, he began calling himself a “teacher-preneur.”

“After teaching, I’d work at Total Wine and Spirits,” he said. “Then I’d go home, get some rest, and then at 3 in the morning I’d wake up and deliver newspapers until about 5:30. I’d come back, get a brief amount of sleep, get dressed, go to work, and do it all over again.”

While obtaining his own degree, a master’s in school administration from North Carolina Central University, Vick spent five years at River Oaks Middle School, designed for students with behavioral issues. He said he has a heart for people perceived as “different,” something he learned as a student. Growing up, Vick participated in a summer youth program where he served as a custodian at local Knightdale Elementary. He got close to the administrators there, which he said had a strong influence on his decision to become a teacher.

Through one of the directors of the program, Vick got involved with the Special Olympics of North Carolina. During his four years with the organization, he helped out with and ultimately coached the basketball and track-and-field teams in local and state competitions. He said he believed the stereotypes of people with special needs, but learned to let them go.

“I think what I liked most about the special needs kids is that they appreciated everything you gave them,” he said. “They really enjoyed us.”

Reggie said his brother always took the time to learn who people are, and it started with his experiences in the Special Olympics. “He met a lot of great people through that program, and his life really improved,” Reggie said. “He became a lot more patient and learned to be attentive to other people.”

After earning his degree, Vick went back to his old middle school, East Wake, to be the assistant principal. Nancy Allen, the principal at East Wake, said she hadn’t met Vick before hiring him, but trusted him because of his family. Vick’s mother and aunt worked there previously, and his cousin still teaches there today.

“His family is huge in our part of Wake County. They’re very respected,” Allen said.

Vick worked at East Wake from spring 2010 until spring 2011, before serving as the principal at Sherwood Githens Middle School in the Durham public schools system for a year. After those first few years as an administrator, Vick said he was glad he made the switch.

“I thought I would miss the classroom, which I do from time to time,” he said. “But as an administrator, it’s amazing to see how large of an impact on the direction of a school I can have.”

Growing up, Vick said he used education as an escape, knowing a college degree could get him out of his tough childhood and away from his stepfather, with whom he had a strained relationship. “I know the power of education,” Vick said. “We didn’t have a lot growing up. I saw getting smart and going to college as an opportunity to get away from home.”

Vick said his goal is to develop well-rounded individuals both in and out of the classroom.

“I think academics has its place, but when you start looking at what these kids have to deal with, being smart only takes you so far,” he said.

Dell said Vick has a vision of getting the community more involved with the school, something he is sure Vick can accomplish.

“In just the few months he’s been here, he’s boosted morale a thousand times over,” Dell said. “He’s very dedicated to this school.”

Vick said he wants to establish an athletics program and student leadership opportunities, such as a student council.

“I want a group of students who can be leaders, and be adaptable,” he said.

The message he’s trying to instill in his students, he said, is to leave places better than how you found them. 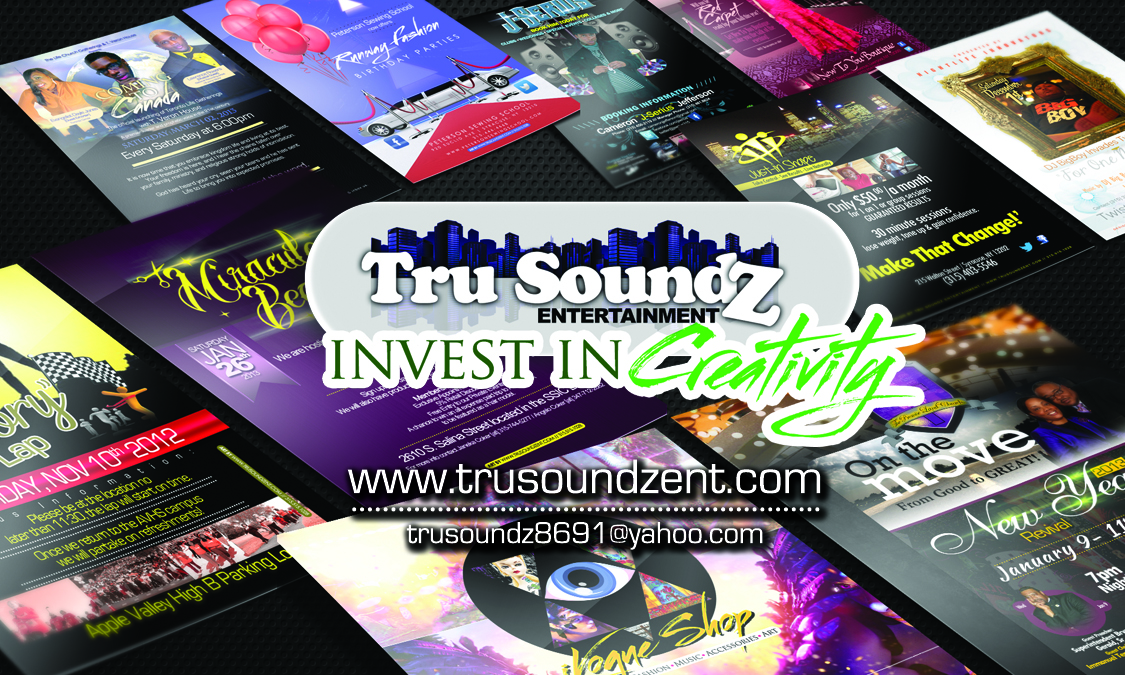