From Newsroom to Classroom

Nick Lisi seems to have adapted to his first year in high school faster than most “freshmen.”

Maybe it’s the quarter-century he spent previously as a professional photographer at The Post-Standard, just a few blocks away, or his own experience being around other kids. His own.

Lisi is completing his first year as a full-time teacher at the Institute of Technology at Syracuse Central, the downtown Syracuse high school that accepts students by application and has made a name for itself by helping more of them off to college. 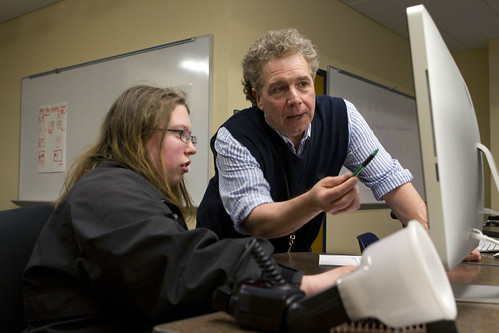 That means more work by students — and teachers.

During a typical lunchtime, many students remain in Lisi’s classroom doing work. He stays right there with them.

“I say he is pretty well adapted to how the students are. I don’t know how he did it that fast,” said Kimber Emm, a junior in Lisi’s photography class.

Mikaela David, a senior, has learned new photography skills that have helped her get her work published in this newspaper, The Stand.

“I think that him teaching this year brought a lot of positive influences and connections to the school. Not through just The Post-Standard but OCC, SU and all the people he has met throughout the years,” David said.

Lisi worked for The Post-Standard for 26 years. He started as a photographer and in 2003 accepted the position of director of photography.

Lisi said teaching has always been his passion, and he pursued a teaching degree four years ago while he was still working at The Post-Standard. Lisi has taught photography or photojournalism for 22 years at the college level.

Lisi left the newspaper in August 2012 and started working full time at ITC in the fall.

“For me, the most rewarding (part) — and that’s why I am here — is to be able to help students learn and to become college-ready, to become ready to take that next step and also to become good people, good world citizens,” Lisi said.

The students have been learning to use Photoshop software to edit their photographs and to use lighting, both important to master as a photographer.

Students describe Lisi as caring, kind, patient and a mentor.

Cheyenne Perry is a junior who recalls an experience with Lisi on a field trip at the Auto Expo.

“I had some problems with my legs when I was little, so they bother me today still, so he was just understanding when I told him about it, that they were hurting that day. He took it slow when we were walking there because it was a walking field trip,” Perry said.

Between his school family and the one at home, Lisi says he has little time for hobbies.

“I don’t have many because I have two growing boys that take up every bit of my spare time and a wonderful wife. I support my two boys (14 and 10) in everything that they do. So honestly, that is my entire life, my family, and I love it. I am very happy about that,” Lisi said. His wife, Kris, recalls one memorable time when they first started dating.

“A belt broke on his car. He had an extra belt and he was able to fix it on the spot. I was so impressed,” said Kris, who added how focused he is on any task.

That drive helped propel The Post-Standard into the digital future, ahead of the times compared to other newspapers. Charlie Miller, a longtime colleague and good friend of Lisi, said The Post-Standard wouldn’t be where it is right now without him.

“He brought us into the digital age, well in advance of any other newspaper. He saw this coming early on, to move away from film into digital,” Miller said.

Miller and Lisi worked together, side by side, for about 22 years. Miller was the police reporter for the early shift when he first started at The Post-Standard and Lisi was the photographer. Their relationship grew into a great friendship.

“The guy always beat me to work. My first impression was this guy never stops working,” Miller said.

Lisi said he has to remind himself that he is not working with paid professionals anymore and not everything is going to go according to plan.

But some students think he is doing as well as the seasoned teachers, and are more worried about losing him, if anything.

“I hope he comes back next year,” Emm said. “He is probably my favorite teacher, because he’s like so helpful, not just in media but like in lifewise and stuff like that. He is never stressed, he is never upset, he is always a happy teacher and we need that a lot here.”

Meet Nick & Join The Stand for its Fourth Annual Photo Walk This Saturday! 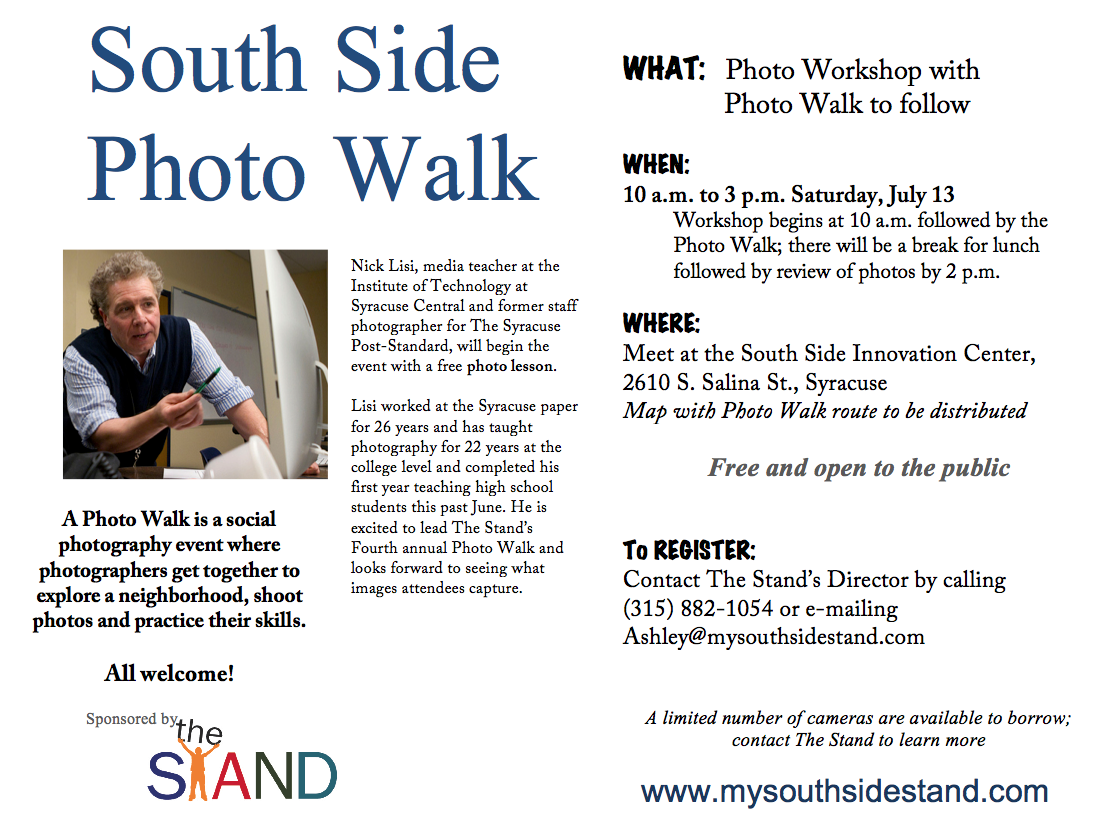