Seventy-five students from the Roberts School, at 715 Glenwood Ave., joined their peers from Frazer and Grant middle schools to spend an April day at Syracuse University. The eighth-graders learned how to be accepted into college and what an education at that level can offer.

The event was organized by the university and the nonprofit organizations Say Yes to Education and the Prevention Network. 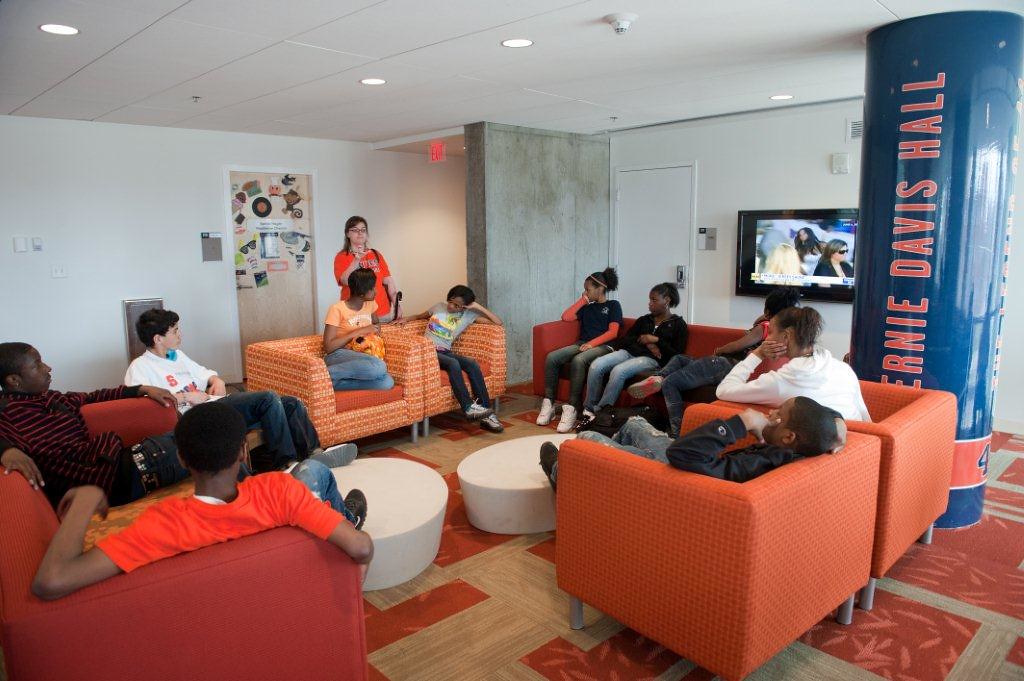 Students from the Roberts School visit Ernie Davis Hall at Syracuse University to get an idea of dorm life. -- Photo Courtesy of Say Yes to Education

Rachael Gazdick, director of Say Yes, said the schools were chosen to represent Syracuse’s South, North and West sides. Say Yes provides services to Syracuse City School District students to help them get into college, and it ensures free college tuition to students accepted into certain universities on their own merit. The Prevention Network sends representatives to Syracuse schools to warn students about the dangers of illegal drugs and addictions.

Shaquoyia Armstrong, an eighth-grader from Frazer, said she loves pets and wants to be a vet. After hearing from faculty and students, she said she learned what she would have to do now to achieve her dream. “They say we had to get good grades to go to college,” she said.

Kristi Eck, Say Yes site director at Frazer, said getting university faculty and students to talk about careers that can come with having a college degree meant teaching the eighth-graders to recognize that going to college is “going to make you money, it’s going to make you feel like you’re doing something worthwhile.”

The students’ visit began with a greeting from Kheli Willetts, a professor of African American Studies, who told them, “Today is a very special day. I see artists, doctors, educators, lawyers, physicists, engineers, and yes, even professional athletes.”

She said she had come from a single-parent household, an environment that she said many students share. She said she worked hard in school, ignoring those who might have discouraged her, so she could reach her goal of higher education.

Joe McMahon, a Roberts School teacher, said, “I believe some of the students who come from poverty or single-family homes, they think college is for rich people.” But, he added, “I see and hear from professors and Ph.D. candidates, and they come from similar backgrounds, and students can see that college can be attainable for them.”

Gazdick told students that Say Yes may provide the free tuition, but students still need to be accepted into college on their own merits to receive it. “One of the things in Say Yes is to keep in mind that kids have got to be competitive,” Gazdick said. “They’ve got to get into college.”