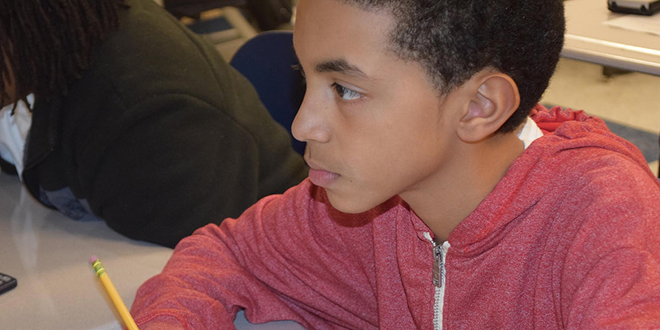 Whenever Jo’sada Pacheco’s grandmother gets a new phone, she goes straight to Jo’sada for advice. The buttons and features confuse her, but Jo’sada is there to help.

Recently her grandmother’s computer broke, and Jo’sada was there to delete the unnecessary files and get the device up and running.

“I played with toys, but then when I hit a certain age I didn’t want to play with toys anymore,” Jo’sada said. “I got a phone, and I wanted to learn more about it.” 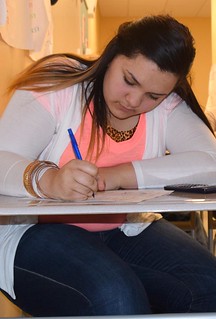 Jo’sada’s passion for fixing things has stemmed into a career goal of becoming an electrical engineer. She is now a freshman in the first class of the Pathways in Technology Early College High School program, known as P-Tech, which is located at Institute of Technology at Syracuse Central, known as ITC.

P-Tech is a six-year program that combines high school, college and career training. Each student, upon getting accepted, has a chance to attend Onondaga Community College for free and graduate with an associate level degree.

On Jan. 20, in his State of the Union address, President Barack Obama called for free community college for all qualified, interested students. New York Gov. Andrew Cuomo believes the P-Tech programs will prepare more than 10,000 students, including those in Syracuse, for “high-skills jobs.”

Jo’sada and her classmate, Andru Skinkle, are two of 47 students in ITC’s first P-Tech class, which Cuomo introduced in September 2013 as one of 16 such state- wide programs. The Syracuse City School District, the Manufacturers Association of Central New York and OCC formed a partnership, and Cuomo granted the three partners a total of $2.4 million over seven years.

The backbone of the program is the relationship stu- dents build with mentors. Andru, a freshman from Utica, has worked alongside three professionals at National Grid. After taking a tour of National Grid and learning about the company, Andru and his peers created a Prezi to show what they learned.

they enjoyed and offering constructive feedback on other parts of the presentation.

Andru, who in eighth grade attended a seminar, inter- viewed and accepted an offer to join P-Tech, hopes to become an electrical engineer. While many of his peers are unsure which professional route to take, he’s already gaining practical experience in his field at age 15.

He’s also a member of the National Society of Black Engineers. Last year he helped his team to third place in a national Mathnasium TriMathlon competition in Tennessee, and this March he and his team will venture to California for another competition.

Before the competition, Andru has to continue to hone his skills in school.

The P-Tech students’ day is structured like that of a typical high school student, but they have an additional Introduction to Engineering and Design class. Once they get older, they start taking classes at OCC. 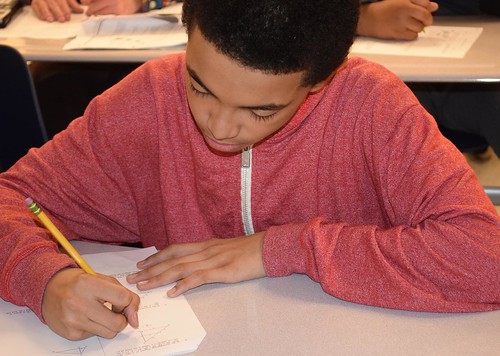 Andru has no problem reading “Fences” by August Wilson in English class, but his true interest lies in engineering, and he appreciates how much he’s able to learn in a program that’s tailored to people like him. His eyes light up as he talks about his engineering class.

“Most of the program is decided out for you,” Andru said. “It helps you get started.”

He recently toured Ephesus Lighting, Inc., on East Jefferson Street, and learned about spotlights in sporting facilities. Now he knows what companies do to help arenas use minimal energy.

Formica, in her first year as ITC’s principal, helped launch the P-Tech program. She hopes to increase the number of P-Tech students from 47 to 55 next year, and she expects the program will continue to improve.

“We’ve seen some things we’d like to do a little bit better,” Formica said. “We’re in the process right now of developing the six-year scope and sequence. What do students truly need when they come into ninth grade?”

Formica noted how taking classes on a college campus gives students a chance to learn from terrific educators. Many of these students would otherwise not have an opportunity to go to college, but P-Tech enables them to do so.

Right now, P-Tech has more than 20 business partners, ranging from Lockheed Martin, to United Radio, to Tech Bridge International. Lisi, the P-Tech coordinator, lists each organization with enthusiasm. When he reaches the bottom of the spreadsheet on his computer, he looks up and smiles, clasping his hands.

“And we just started!” he says with a grin.

Sally Whitney, director of Enrollment Development at OCC, is involved with the OCC side of P-Tech. She noted that while Obama’s initiative is a new idea, significant steps already have been taken toward emphasizing and bettering community college education.

Programs such as P-Tech benefit students because they are exposed to fields they will be working in just a few years later as professionals, Whitney said. One class in particular, Computer Aided Design, gives students a chance to work with advanced software.

“There’s been research that shows when students are engaged in a technical program they’re more likely to graduate,” Whitney said. “I think opening up more programs like P-Tech will continue to expand opportunities for students.”

Jo’sada knows the majority of people working with computers professionally are male. That doesn’t deter her. If anything, it inspires her.

“When I was little I always wanted to work with phones and computers and electric and stuff like that,” Jo’sada said. “I was like, ‘This is what I want to do when I get older.’