Danforth Middle School’s new principal, Dr. Ronardo Reeves, is not new to challenges. He has a new year ahead of him, a building with new staff and opportunities to exceed expectations alongside other new principals in the district —all nine of them.

He is actively on call or frequently engaged away from his desk. He is the administrator who speaks with his hands, looks his students in the eye and pauses mid-conversation to say, “bless you” from his office — without knowing who sneezed. Yet he doesn’t intervene when he hears the to and fro of children and staff resolving issues. “They can handle themselves. Trust me. Listen.” 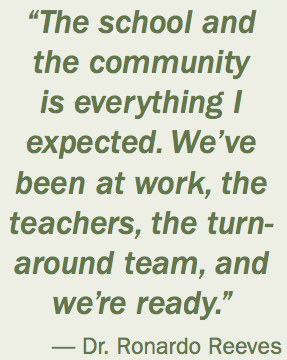 His staff, in whom he has confidence, will be the first to correct anyone who calls him Mr. Reeves. He describes their bonding time as full of talking, eating and professional learning in a condensed amount of time to prepare for the new school year.

“The school and the community is everything I expected,” Reeves said. “We’ve been at work, the teachers, the turn-around team, and we’re ready,” he said with an enthusiastic smile.

Growing up in urban Fort Lauderdale, Fla., Reeves is familiar with the Syracuse setting. Before Danforth’s Jazz on the Green meet-and-greet in August, Reeves walked up South Salina Street and knocked on every door, introducing himself and encouraging residents to attend the mixer and give it a try.

“It” is Danforth. Reeves has the challenge of looking parents in the eye — parents who transfer their children from Danforth to other schools at a rate higher than any other school in the district — and encouraging them to trust that their students will be safe, challenged and part of a turn-around that is taking the better effort of the community, school board and state.

ALWAYS WANTED TO WORK WITH YOUTH

Transitioning from the military to the police academy, Reeves decided long ago that he was going to help youth. He decided to do it as part of the Atlanta Police Department.

“One of the reasons I wanted to become a police officer was because of my experiences, and I liked to work with kids,” he said. “The Police Athletic League was big. They had a lot of influence in the community: getting out there, getting in the schools and making those connections.”

But when he realized that being an Atlanta police officer posed challenges for him to be there for his own children, he resigned.
“My priority is my family,” he said.

Remembering how the Police Athletic League officers moved and connected the right audiences in schools, Reeves sought a career in teaching. He began in special education and eventually moved into counseling services.

“I noticed then that I spent a lot of time dealing with students on a counseling level,” Reeves said. “I did group home counseling, community volunteer counseling, and I started seeing things that weighed on me.”

Among the things that he noticed: Students lacked relationships with teachers; schools had poor attendance and high pregnancy rates; and visible administrative holes existed in the real-world prep and college preparation process.

Reeves went on to earn degrees from Oglethorpe University, Clark-Atlanta University, and his doctorate from Argosy University Sarasota. He worked in leadership in Georgia and Louisiana before coming to Syracuse, and he says he believes in going where he can make a dynamic impact.

With confidence, he calls Danforth Middle a gem of the Brighton-South Salina area that just needs to shine again.

“I’m a parent too. I know how these parents feel,” Reeves said. “My daughter speaks so freely sometimes she tells me too much,” he said, laughing, about his 14-year-old daughter.

Reeves must work with parents, staff and his turn-around team to meet ELA and Math testing requirements this year that Danforth failed in the 2010-2011 state report card. He also must exceed the expectations outlined by the superintendent and regain the partnership of a community.

“The one thing I want from these parents is their support,” he said. “I want them (students) to get a quality education and to be college and career ready so that when they do graduate — on time — they have the option to do whatever they want to do.” 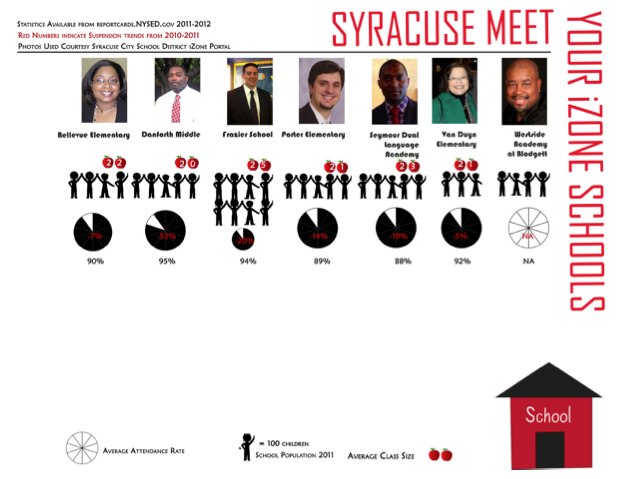