Two nonprofits team up to build garden for the South Side

Two Syracuse nonprofit organizations — one a nursery, the other a free clinic — are turning a vacant South Side lot into an edible forest garden to provide a healthy crop of fruit and vegetables to local residents.

Members of the Alchemical Nursery and the soon-to-be-opened Rahma Clinic, together with a small crowd of neighborhood volunteers, spent a sunny Saturday last month laying cardboard, turning soil and planting seeds at 3100 S. Salina St. 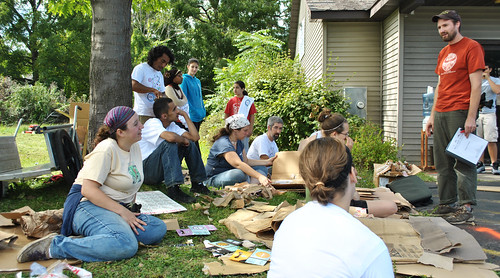 Steve Gabriel, who works at the Cornell Cooperative Extension as well as the Permaculture Institute, gives a lunch time presentation on the processes and benefits of permaculture to A-OK volunteers. -- Lena Budd, Staff Photo

“We wanted landscaping that would be an opportunity for the neighborhood kids to eat from,” said Magda Bayoumi, one of the moving forces behind the garden.

Two years ago, she and her husband, Mohamed, purchased an abandoned lot with plans to open a free clinic. The couple, natives of Egypt who have lived in Syracuse since 1979, had secured support from a group of local doctors who shared their dream of providing medical services to South Side residents.

“We figured we have a lot of doctors on hand, so we approached them about a free health clinic since health care is something that is needed around here,” Bayoumi said.

The doctors were very supportive, and the free clinic was off the ground. But after work began on the Rahma Clinic — the name is Arabic for “mercy” — Bayoumi said she discovered the lot contained ample space for a garden. 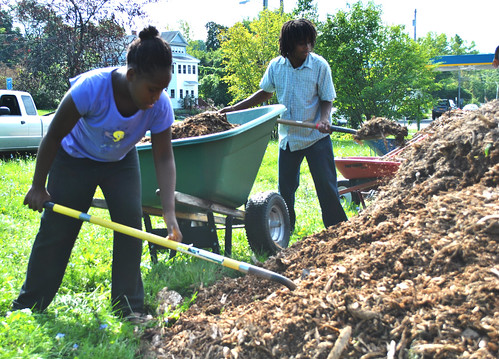 Denicha Goolsby, 13, and her cousin Tyler Jackson, 13, shovel mulch into wheelbarrow. They both live on the South Side and were walking by the site the morning of the cleanup, and decided to help out. -- Lena Budd, Staff Photo

Forest gardens are new to the United States, and this will be the first one in Syracuse, said Frank Cetera, a board member at the Alchemical Nursery, located at 200 S. Geddes St.

“The forest garden will become self-sufficient over time,” Cetera said. “The leaves from the trees will fall and become mulch and fertilizer on a regular and ongoing basis.”

The Alchemical Nursery is a nonprofit organization dedicated to regenerating urban “lifestyles and landscapes utilizing the principles and ethics of permaculture,” according to the Alchemical Nursery’s website. Permaculture — or permanent agriculture — means to design “human settlements and perennial agricultural systems that mimic the relationships found in the natural ecologies,” the website states.

Cetera said there are many community gardens in the area, but the problem with regular gardens is that they require replanting and harvesting every season. Cetera said he originally became involved with the forest garden initiative when he and Bayoumi served on the Syracuse Peace Council Advisory Board together.

About 30 people helped throughout the day in September to build the garden; children and adults alike wanted to lend a hand. The empty lot was covered with mulch, woodchips and cardboard, waiting to be arranged for the base of the garden. 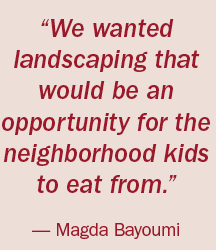 Cetera said they planted some annual vegetables like cherry tomatoes to carry over to next season because a lot of the perennial plants will not be fully developed until next fall. However, he said there are some berry plants that will be ready by next summer.

Some people, like Dave Greene and his daughter Isabel, 12, came merely because they believe in what an edible forest garden can bring to the South Side.

Greene said he had known about the forest garden for a while and wanted to help in any way he could. He said the idea of a snack garden is rare, and he strongly believes in taking what the Earth can give.

“I’ve been a forager for 35 years now,” Greene said. “I used to pick blueberries from the backyard when I was a kid.” 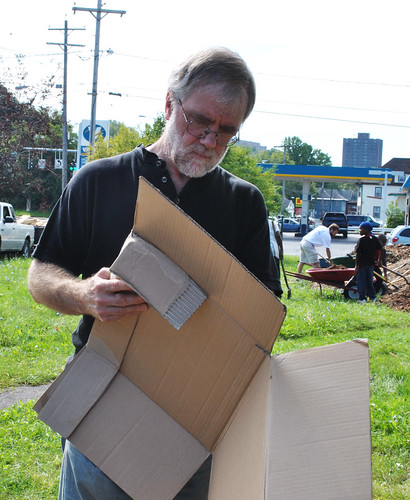 Howie Hawkins, a South Side resident, is running for the 4th Congressional District Common Council, came to show his support in helping to create what he thinks will become a great community resource. -- Lena Budd, Staff Photo

Lindsay Speer, a member of the Peace Council and Neighbors of the Onondaga Nation — a nonprofit organization that supports native people’s rights to reclaim land —  turned out to help because of her concern over a lack of fresh food available on the South Side. The garden, she said, could provide healthy alternatives to fast-food snacking.

“I don’t think we’re going to take too much business away from the corner stores to be honest, but it’s a way of illustrating where food comes from and just do something good for the community,” Speer said.

Educating the community members was another reason Cetera and Bayoumi wanted to build the garden.

“It’s an opportunity for people to learn about ecological wisdom, and bring it back to the city,” Cetera said. “People are not comfortable with gardening. They’re not sure how it works, so it’s a way for them to get involved.”

Not only were there community members helping out, but the event also drew a local political activist showing his support. Howie Hawkins, who is running for Syracuse 4th District Common Councilor as the Green Party candidate, said he sees the garden and the Rahma Clinic as a resource for the community. With the increasing number of uninsured people and a lack of healthy food options, he said, “This clinic can fill the gaps, so I’m here to help them get set up.”