Grant is used to build ‘outdoor classroom’ for environmental education

Thanks to a half-million dollar state grant, the city has built what it calls an “outdoor classroom” — with educational signs, designs depicting local fish and a large, stone sitting bench — to teach children about the life of Onondaga Creek.

Brainstorming for the project’s purpose and design began last year after the city landed the grant from a state program intended to revitalize waterfronts. Local officials convened a committee to solicit ideas. They received 32 in all, including a canoe and kayak launch, but selected the open-air classroom with its emphasis on environmental education.

The project, dedicated a month ago by Mayor Stephanie Miner, sits in Kirk Park, a wide patch of South Side greenery and playing fields. Some residents have said the park needed a boost after incidents of violence over the years, including a shooting during a Kirk Park Colts football game Sept. 7, 2014 and then a homicide Sept. 26, 2014. 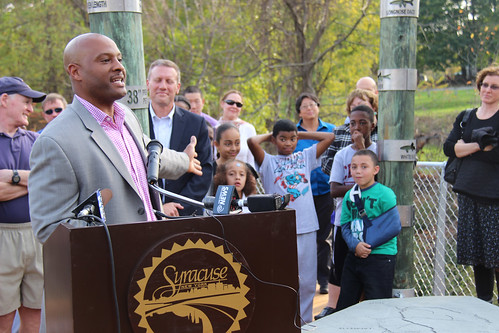 Baye Muhammad, Syracuse’s commissioner of Parks, Recreation and Youth Programs, speaks during the dedication. | Photo Courtesy of the Mayor's Office

During an Oct. 28 press conference to dedicate the classroom, Miner said that despite the shootings, Kirk Park is safe.

“Kirk Park is a jewel in our city, and we will not allow two knuckleheads to ruin it,” Miner said. “We will continue to invest in Kirk Park and the neighborhood. The only way that you solve problems is that you run towards them and not away from them.”

Officials added that residents of the surrounding neighborhood have been pleased with the project’s result.
“I think people realize that [these] type of amenities are positive additions to the park,” said city planner Owen Kerney. “People young and old, and everybody in between, can enjoy it.”

Over the past decade, projects have been held to help clean up the creek. This outdoor classroom builds off that momentum, Kerney said. The site will also serve as a stop along the planned second phase of the Onondaga Creekwalk.

“[The outdoor classroom] is an opportunity to view the creek,” Kerney said, “to learn about the creek, to sort of engage the creek inside of this great existing city park that is Kirk Park.” 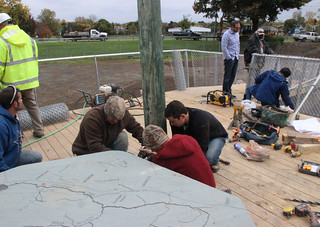 The Outdoor Classroom was made possible with $500,000 in funding from the New York State Department of State. It includes a raised platform providing an enhanced view of Onondaga Creek. | Photo Courtesy of the Mayor's Office

When building the outdoor classroom, the McGinnis Nelson Construction company faced several challenges. The deck itself straddles one of the main sewer runs, which forced the company to redesign the structure, said Graham Nelson, the vice president of the company.

They also had trouble finding a rock that would suffice for the large, blue stone bench on the deck.

“There were a lot of unusual parts to this project that we weren’t used to seeing in our business,” Nelson said, “but it turned out very nice.”

Syracuse Common Councilor Bob Dougherty served on the project’s planning committee. “I think there’s a lot of really neat things that are happening down there, and I think this is just one more of them.”