Most people would be happy to kill two birds with one stone. However, Matt Brubaker isn’t content just with that. He wanted to kill six birds with one stone by volunteering on Sept. 10 at the Stone Soup Community Garden on the 400 block of Gifford Street.

He wanted to assist building a wood shed for storing tools and other materials, sharpen his gardening skills, support sustainability practices, work together with the community through collaboration with other volunteers, give back to the neighborhood and help the community learn about gardening. 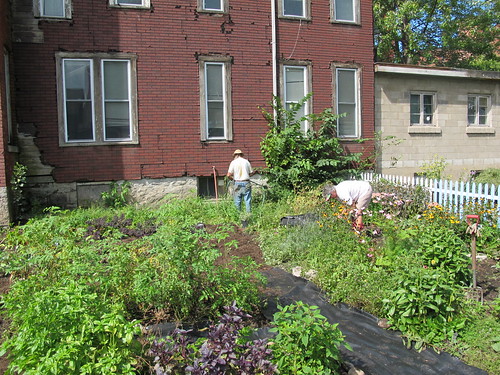 Brubaker decided to donate his time after Emily Nisco Frank contacted King + King Architects, where he works. He was joined by at least another King + King employee. The architectural firm is located at 358 W. Jefferson St., about six blocks away from the Stone Soup Community Garden.

The garden was started by St. Lucy’s Church parishioners a fews years back, according to Kevin Frank, Emily’s husband. Kevin was pastoral associate and neighborhood outreach coordinator at St. Lucy’s for 20 years until May 2010, when he was hired as executive director of the Brady Faith Center, located at 404 South Ave., which serves as a Catholic outreach center for the South Side.

“I see my job as that of a lay minister,” Kevin said.

Meanwhile, Emily works as musical director of the parish.

The married couple was also breaking a sweat on a warm Saturday morning along with about a dozen other volunteers.

The event was part of the Acts of Kindness weekend organized by Women Transcending Boundaries to commemorate Sept. 11, 2001.

Volunteers like Brubaker weren’t only being kind to humans but also to plants by providing them with a nurturing environment in which to develop, which meant, among other things, watering and improving the topsoil with mulch in the form of peat moss. Both edible and ornamental plants benefitted from these acts of kindness.

“I’m an avid gardener,” Brubaker said before climbing a ladder to put the finishing touches on the shed’s metal roof. “I want more gardens to work on.”