Langston McKinney Manor consists of 75 family units in 18 buildings on 10 acres bordering downtown Syracuse. In 1990, it replaced another housing project on the same site, Mulberry Square, whose tenants had benefited from McKinney’s legal assistance in getting addressed their grievances related to their leases. 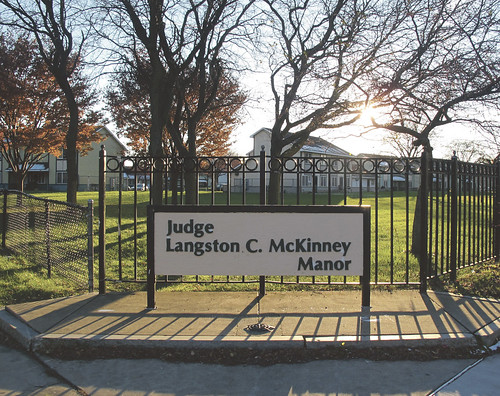 On Feb. 16, McKinney spoke to an audience of 50 people gathered at ArtRage Gallery, located at 505 Hawley Ave. He spoke at a complementary event got the gallery’s exhibit “Selma to Montgomery at 50: Civil Rights Photographs by Matt Herron.” Within the overall exhibit, there is a photography display, dubbed “Forces for Change: Local Civil Rights Activists,” which recognizes McKinney as well as 24 other “civil rights veterans” living in the area, said ArtRage’s community engagement organizer, Kim McCoy. McKinney’s talk was part of a panel discussion moderated by Barrie Gewanter, director of the Central New York chapter of the New York Civil Liberties Union.

McKinney framed his work for the housing rights of South Side tenants as part of the broader civil rights movement. Gewanter prompted him and the other two panelists with questions on their participation in the movement, starting with “Where were you between 1955 and 1965?” and following with “What was your aha moment?”

McKinney answered that he grew up in a Catholic family in Miami, where he didn’t realized that he was going to a segregated school, to which he was bused. “Being confined in such school was a manifestation of the local culture,” he said. “The only white people that I saw on my way to school were a policeman and a mailman.”

After graduation from high school, McKinney went to the historically black Howard University in Washington, D.C. President Lyndon Johnson was the speaker at McKinney’s commencement ceremony on June 4, 1965, delivering the address “To Fulfill These Rights.”

With a bachelor’s degree in chemistry in hand, McKinney was hired by a company in this field in the Syracuse area where he worked until he enlisted in the Army. This allowed him to benefit from the G.I. Bill. He chose to attend Syracuse University College of Law under the bill. “There were four black students in my incoming class and five black students total in law school in 1968,” he said. “I was an unknown beneficiary of the struggle and activism in Alabama.”

At the college, McKinney met a fellow student whose family was of Jewish Russian origin. The student introduced his father, who was a lawyer, to McKinney. The father taught McKinney about the history of the pogroms, ethnic persecutions targeting Jewish people in Russia. He also familiarized McKinney with Ramparts.

“Ramparts was a progressive, leftist magazine that directed question marks to what the U.S. government was doing,” McKinney added. “I read every issue from cover to cover.”

McKinney told the audience that then he started doing “doing stuff for social change.” He and a friend founded the SU Chapter of the Law Students Civil Rights Research Council (LSCRRC), whose Summer Internship Program enabled McKinney to head down to Albany, Georgia, to work with Chevene Bowers King, a prominent civil rights attorney, in dealing with voter registration problems for African Americans.

“What I learned in Georgia was how to do the drudgery of the work to use the law to enact social change, and how to do community organizing,” he said.

An audience member asked McKinney whether or not he had felt fear while striving in Georgia to put an end to the exclusion of African Americans on juries using voter registration rolls, in which they were underrepresented.

“I had to drive back to Albany when it was getting dark but I was too young and too foolish to be scared,” he replied.

Another person in attendance, Janis McDonald, a law professor, said at this point that she had gotten a small grant to take SU law students to Georgia to follow in McKinney’s footsteps.

After getting his juris doctor degree in 1971, McKinney worked at Onondaga Neighborhood Legal Services and then at the Frank H. Hiscock Legal Aid Society until he became a partner in the law firm Maye, McKinney & Melchor. Finally, in 1986, he was appointed Syracuse City Court judge, position in which he served until his retirement 24 years later.

McKinney concluded: “Much of my legal work was tied with housing. It has been rewarding to have had a chance to be where the rubber meets the road. The fight has to be tireless to help the disenfranchised people in their plight and to get them franchised. We have to be students of history to learn the roles that people played to materialize their collective will.”

The exhibit featuring the portraits of the 25 local civil rights activists opened Feb. 7 and runs through March 28. ArtRage Gallery hours are 2 to 7 p.m. Wednesday through Friday and noon to 4 p.m. Saturdays.