In a game that looked over heading into the final quarter, coach Tim Schmidt’s Cougars battled back and were a play away from evening the score. 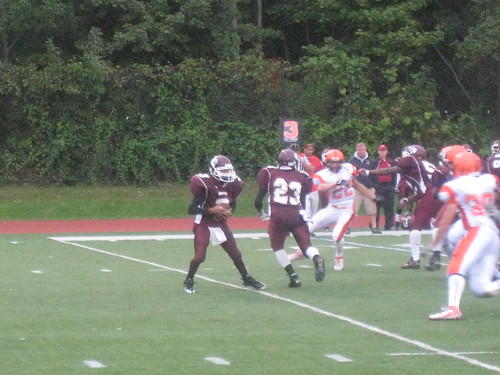 Corcoran was unable to level the score though as the extra point was missed — proving to be vital later in the game.

The game slowed to a crawl for the next 25 minutes, as both teams struggled to move the ball against one another.  But with four minutes left in the third quarter, Black Knight receiver Ethan Froelich bounced off a hit, turning a short pass from quarterback Dante Mezza into a 22-yard touchdown, making the score 14-6.

Looking dispirited, Corcoran was unable to mount much of a response until a Mezza fumble with nine minutes left in the game. The Cougars marched down the field at will before a fumble by running back Tyquan Mahon stopped the drive. Despite the setback, Mahon fired up the team, and they quickly shut down the Black Knights’ offense.

With the ball back in their hands and five minutes left in the game, Corcoran sprinted down the field. Quarterback Anthony Heard connected with receiver Trenell Bogans for a 27-yard reception, followed almost immediately by a 27-yard run from Porch, who had been quiet since his first-quarter touchdown.  The drive was capped by a determined 15-yard touchdown run by Mahon.

Down 14-12 with less than three minutes to play, the team attempted a two-point conversion.  Although they spent the previous two drives moving the ball with ease, the Black Knights burst through the Cougars’ offensive line, tackling Mahon three yards short of the goal line.

Rome attempted to run out the clock, but could record only one first down and were forced to punt. Corcoran needed a special play to have a chance of scoring, which Porch nearly provided.  His thrilling punt return was wiped out on a tough call for an illegal block by a teammate.

Following a sack, Corcoran needed a miracle. Heard’s last-gasp heave was intercepted by Rome’s Anthony DeJean, who returned the ball 43 yards for a touchdown on the final play of the game.

The game brought both teams records to 1-1 on the season.