Don’t Close the Doors on Them Just Yet

Saturday, Feb. 16, in collaboration with D.R.E.A.M. Freedom Revival, the Ida Benderson Seniors Action League put on a jovial, quirky and message-heavy performance at the Grace Episcopal Church on Madison Avenue. The event was a way for the seniors, still reeling from the closure of the popular Ida Benderson Center back in October 2011, to musically and theatrically voice their disapproval.

Imagine this. The venue is packed. The lights are dim. Rows of seats filled with people young and old — some even carrying small children on their laps. Others are sitting wherever there’s a spot, even the floor. 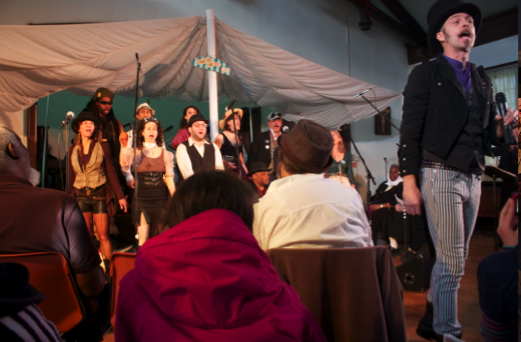 At the back of the room there’s a line of people standing, extending their necks up and down to secure a good view of the performance ahead of them. The band is tuning up — one guitar chord here, a drum ding there. You’d think you’d just been seated at a Broadway play, waiting for the curtains to rise up and the show to start. The performance by D.R.E.A.M. Freedom Revival and the Ida Benderson Seniors Action League comes pretty close to a Broadway performance — the enthusiasm, the heart, the passion, it’s all there. The cause they’re performing for? Giving seniors, an often forgotten demographic, a voice.

Dr. Reverand Ebenezer Abernathy, a character played by D.R.E.A.M. founder Kevin Bott, starts off the show saying “This is the land of the great law of peace,” Abernathy says. “Together, there is strength.” It’s the central message of the performance: through unity and togetherness we can all help to find a new home for the displaced seniors who were so affected 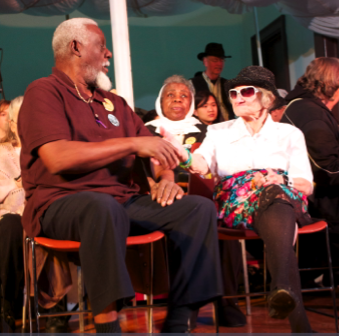 by the closing of the Ida Benderson Senior Center on South Salina Street more than a year ago.

“We want to bring enough people together that we can write a sound or song of the Syracuse community,” says Bott about the mission of the group.

Founded in Winter 2011 by Bott and his wife Aimee Brill, the performance group, according to its website, is a “…collaborative, inclusive and participatory political theater company comprised of about 30 residents of Syracuse and Central New York … Grounded in theories about political and community-based performance and in Central New York’s rich history of freedom struggles and 19th century tent revivals.”

“We want D.R.E.A.M to be an invitation for people that are usually silenced in our culture,” Brill says when describing why they felt the need to perform on this issue. “A platform for social change.”

Bott, who holds a Ph.D in Drama from New York University and is also a professor at Syracuse 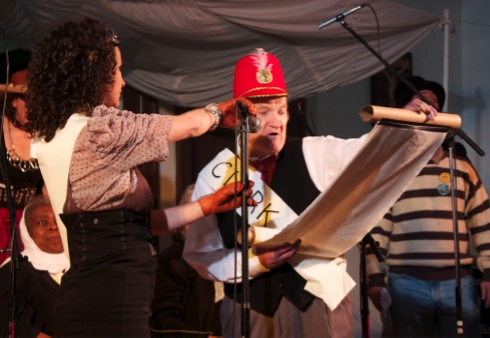 University, was passionate about forming a collaboration when a member of the group, Denise Nepveux, brought up her involvement with the Seniors Action League and some of the protests the group had been doing. It took some time for the partnership to form, but what soon grew was an event that everyone worked tirelessly for and could not wait to put on.

“The turnout was amazing,” Nepveux says about the more than 100 in attendance, including former Green Party candidate for congress Ursula Rozum. “The energy in the room was positive and there was support for the seniors.”

Support for seniors is what Nepveux, a volunteer with the Ida Benderson Seniors Action Group and a post-doctoral fellow at the Syracuse University Center on Human Policy, says should be of a great concern for everyone, not just the elderly.

“We need support from of the community,” Nepveux said. “Knowledge, skills and resolutions.”

Help from Syracuse residents is what Nepveux is confident of will help bring awareness, and hopefully solutions, to many issues like isolation, poverty, insecure housing and malnourishment that many seniors face. The Ida Benderson Seniors Action Group meets every Friday at Plymouth Church on East Onondaga Street. “We welcome everyone to join us, we need all skills and talents,” Nepveux said.

For Mary Carr, 64, who’s a member of the Ida Benderson Seniors Action Group and was a regular face at the center before it closed, she hopes that through events like these the eventual goal of bringing back the center will become actualized — and quickly.

“You took our freedom away again from somewhere comfortable,” Carr says about what the closure meant to her and others. “This event helps to let people know that we are not gone and we are still looking for a place to go.” Although the center closed more than a year ago, she’s hopeful that soon they’ll have a new place to call home.

“We need community,” Bott says about support for issues. “It takes showing up and taking a stand.”