Elks Pride 315 get new drum thanks to donations

The sound of drums pulsates through the walls of the Elks Lodge as members of the Elks Pride 315 drum line practice for their next show.

The drum line has been a part of the tradition of the Elks dating as far back as 1909. After a hiatus, the drum line started back up seven years ago when the Elks moved to a new location, at 3815 S. Salina St. Now, according to Anthony Emery, the director of Elks Lodge No. 1104, it’s the only Elks band in New York state. 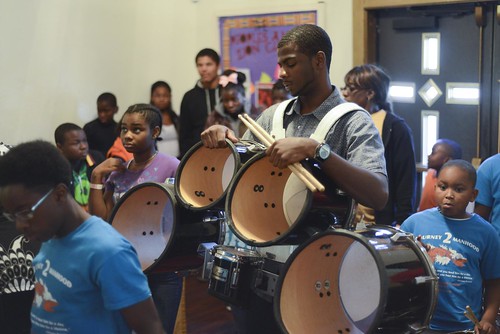 The Syracuse Elks Marching Band prepare for their performance during the Back to School Gospel Jam. Only half of the drumline was present for this event because the other members were busy returning to school. | Jessica Suarez, Staff Photo

The band is composed of 23 members whose ages range from 5 to 20. The drum line has played at the St. Patrick’s Day parade, the Great New York State Fair and the Boxing Hall of Fame in Canastota, as well as at events in the community such as weddings and  church functions.

“With everything going on nowadays, if we can take some money and pool it together to buy some drums, we can take a kid off the street and keep them out of trouble,” Emery said. “That’s more important to us than anything.”

At the Mary Nelson Youth Day Barbecue held in August, guests were asked to donate $1 to the event, which had been free in the past. The money raised was given to the Elks Pride 315 drum line.

The donation is enough to cover the price of one more drum, Emery said.

“People don’t realize how much a single drum costs,” said Emery, adding that the average drum can cost $450. 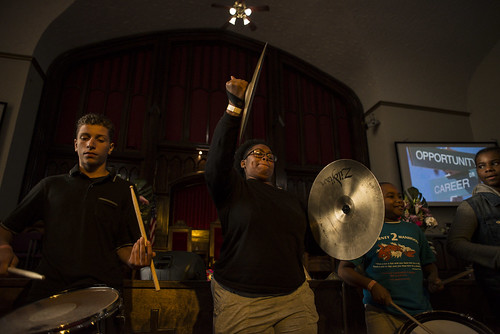 Lee Glover, youth president for the Elks, is working to raise more money to buy more drums for the band through a grant from the Syracuse Common Council and other fundraising.

Glover revived the drum line after the previous leader died a few years ago. He was faced with the task of recruiting new members and acquiring more drums, and he accomplished his goal.

“We went from the bottom right up to the top,” Glover said. “Everybody wants them to play for them. Sometimes we have to tell people they aren’t available. We have a good thing going right now.” 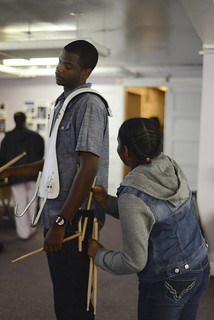 Brother and sister, Brian McElroy and DeAsjia Harris, each carry extra drumsticks in their pockets while they perform because the pair tend to break them often while drumming. | Jessica Suarez, Staff Photo

Glover attributed the success of drum line to Tyehimea Reese, the director of the band.
Reese grew up playing the drums in church and started playing for the drum line when she was 17. She played the drums for 10 years before she began to take over as an instructor last January.

“Music is the voice of the world,” Reese said. “I think it’s important because it gives young people an outlet and something to do in a positive light, other than sports.”
Reese learned how to teach the drummers by mimicking her former teachers, she said.
Students are enjoying the experience.

“My favorite part is having a great time and learning new steps and beats for the drum line,” said De’Asjia Harris, 12, who plays the tenor for the drum line. “My best memory of the drum line was just starting. When people teach me something, I catch on very quickly.”

Harris started playing for the drum line last year after Reese approached her. She is now the only female member of the drum line, but that doesn’t faze her.

“It’s easy for me to be the only girl on the drum line since I’m basically a tomboy, and I have two brothers,” Harris said.

Keith White, 15, enjoys being a member of the drum line because it allows him to express himself and deepen his understanding of music.

“It’s a fun time, and there’s a lot of laughter on stage when people mess up, but we get back together,” White said. “The drum line is like your own little family.”