Wright, a professor at the S.I. Newhouse School of Public Communications at Syracuse University, and his son, Rubin Wright III, posed for a photography exhibit that will be shown in conjunction with Syracuse Stage’s upcoming production of August Wilson’s “Fences.” 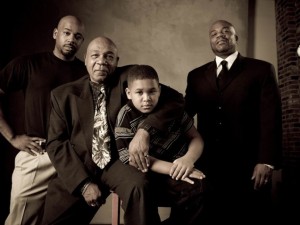 Fred Harper, Bill Harper, Elijah Harper and William Harper are part of the fathers and sons on display as part of the photo exhibit, which runs May 5 through 30, in conjunction with the showing of "Fences" at Syracuse Stage, 820 E. Genesee St. To learn more, call the box office at (315) 443-3275 or visit www.syracusestage.org

The play, which opens May 5, is about an African-American former ballplayer and his relationship with his talented son.

Carroll is working with Kyle Bass, the dramaturge (a historian) at the Syracuse Stage and Carol Charles, the community engagement manager. They originally wanted athletes, but the project has grown to encompass all types and ages of fathers and sons.

Charles said she wants the project to include narratives as well.

“What I will do now is go back to the fathers and ask them to comment on fatherhood,” she said.

For Wright, talking about fatherhood comes easily. “It’s wonderful being a father, taking your son around, showing him stuff, teaching him, getting ready for life.”

After being photographed with his son, Wright said he believes that the photographer wants to portray the emotional connection between father and son.

Wright said he has always been surrounded by positive father-son relationships.
“I had a wonderful father, myself, when I grew up,” he said, adding that he is looking forward to seeing those feelings reflected in the portraits.

Charles said she is pleased with the success of the project, but there is one image that she still would like to find. Charles said she has been searching for a father and newborn boy. “Kyle has stopped people on the street, and I’ve scanned my church,” Charles said. “There are no baby boys at this church! I know people with newborn baby girls but no newborn baby boys.”