CJ Young, who returned in September as artistic director of Appleseed Productions, said the South Side theater company he helped found 19 years ago has gotten bigger and more ambitious.

“It has changed a lot and grown considerably — the number of productions in production, the volunteer artists that act and design,” he said.

Appleseed, a nonprofit company, began putting on plays in the basement of Atonement Lutheran Church, at the corner of South Salina Street and West Glen Avenue, in 1993. Still in the basement, Appleseed opened its five-play season in September with a production of “The Real Inspector Hound,” by Tom Stoppard. Next up, opening Oct. 26, will be “The Choice,” by Claire Luckham. 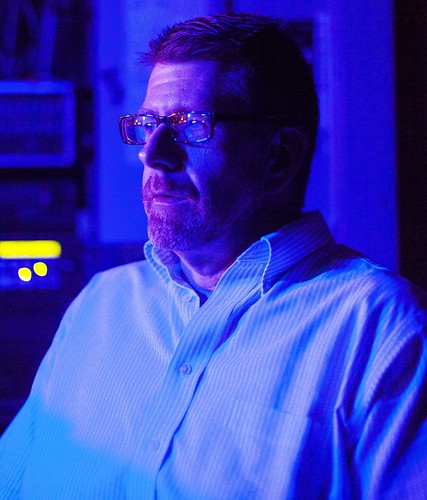 When Young and a handful of other community members decided to establish a community theater in 1993, Young said they wanted to create a family-oriented company that produced quality shows at affordable prices. Appleseed has frozen its ticket prices since 2009 at $18 for adults and $15 for students and seniors, he said.

Over the next several years, Appleseed developed a process for finding plays and scripts, Young said. Usually, artistic directors choose plays for a season and reach out to directors, but Appleseed allowed directors to submit plays for the company to produce, he said. Then, a script-reading committee reviewed the submissions and chose the plays they wanted to produce.

“We thought the reason for that was to support the vision of volunteer artists in our community and make sure the people who are leading up our projects have the passion or fire about their show, their vision,” Young said.

Although Appleseed is located in a church basement, it exists as a nonprofit, nonreligious company through Atonement Ministries. The church developed Atonement and reached out to the community through different programs, such as a childcare center, affordable housing for disabled and retired residents, and Appleseed Productions, said the Rev. John Saraka, chief executive officer and senior pastor at Atonement Ministries.

“I think it’s all born out of a strong connection to the community,” Saraka said. “Atonement Ministries is committed to the South Side and Valley community here in Syracuse. All of the ministries, the housing, Appleseed theater, the daycare, it’s all built to serve the community.”

Appleseed transformed the basement from a church cafeteria into a full-functioning theater, Young said. The stage has permanent light fixtures on the low-level stage and, unlike theater-style seating, Appleseed is set up with round tables. Patrons can sit with a group, eat and enjoy the show. 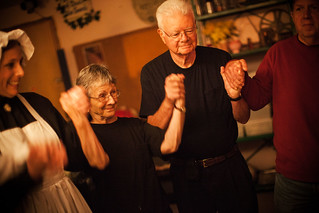 After holding the position of producing artistic director for five years, Young decided to step down in 1998 to “recycle the pond,” he said.

“It was always my goal right from the onset that my term should be about five or six years for the sake of the company,” Young said. “I thought it was important to get the ball rolling and then step aside and let someone else come in.”

Young said he stayed around for one season as a volunteer set designer to help his successor with the transition. He also directed a play in 2001 and 2002. During his time away from Appleseed, Young said he worked as a graphic designer and freelance writer, and from 2004 to 2009 was an executive assistant for the JENNA foundation for nonviolence.

Young said Appleseed continued his mission of a family-friendly theater. More and more people would show up, and some shows sold out. The theater, which can seat around 100 people, saw a slow upward trend in attendance over the years, Young said.

Sharee Lemos, a director for Appleseed since 2002, said she admired Young for creating such an important nonprofit company that benefits the entire community.

“When he formed the company and I saw the kind of work that they were doing, it was very exciting, and I loved it,” Lemos said. “It serves a particular niche that we don’t have in this community.”

Scott Pflanz, an actor at Appleseed in his second season, said he saw that safe, family-friendly environment as soon as he walked in for auditions. 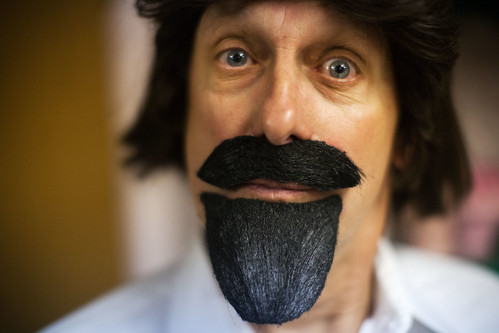 An actor is shown in costume for “The Real Inspector Hound.” The next play that Appleseed Productions will produce is Claire Luckham’s “The Choice,“ starting Oct. 26 and running through Nov. 10. | Annie Flanagan, Staff Photo

“They’ve done a great job of making it a welcoming environment,” Pflanz said. “It’s a family atmosphere, but very professional.”

The round tables allow people to sit with strangers and get to know one another, Pflanz said. He said college students, professionals, senior citizens and families all come to watch plays. Young said Appleseed volunteers serve refreshments during intermission.

“There’s a theme here that’s been here from the beginning that anyone can come in and be a part of Appleseed,” he said. “I think it continues to evolve to reach out to people in the community.”

When an opportunity to return to Appleseed arose last spring, Young decided to return to his former position.
“Who gets a chance to step into the same job you had 20 years ago?” Young said.

“Here’s a chance for me to help be a steward of all the love and hard work that’s gone into the venture.”

Appleseed and Atonement continue to reach out to the community. Last year, Appleseed Academy, a free theater program for teenagers, opened. It covers a broad spectrum for teens to connect to theater, Saraka said, including filming, acting and producing.

Young expects the company to sustain itself for many years.

“At this point, Appleseed truly exists because of all of the people who have come and participated,” he said. “It’s nice to put on plays, but the investment becomes worth it when you’ve established a tradition that can go on for a long time.”