A large blue tarp shrouds in mystery what everyone is anticipating — a bronze statue commemorating and celebrating the life of the late Libba Cotten. Cotten, a South Side resident and all-around “friendly” woman, as many spoke of her, was not your average neighbor. A mother and grandmother by day, this extraordinary figure was a revolutionary inspiration within the music world. On the morning of Oct. 2, that legacy was honored when the city unveiled a statue in her honor — erected in a seemingly fitting park, the Libba Cotten Grove on the corner of Castle and State streets. 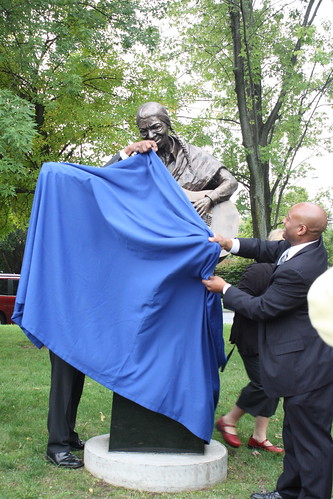 Cotten, born in Chapel Hill, North Carolina in 1895, began her interest in music at a young age.

“She would play her brother’s homemade banjo, but because she was left-handed, she played the banjo ‘backwords,’” it said in the program describing Tuesday’s celebration. After teaching herself how to play on the banjo, her brother moved away and Cotten began to save money for her own guitar. When she finally purchased the instrument, she used the same down stroke technique on the guitar as she did the banjo because she knew no other way. This unique method would later be coined as “cotten picking” by many in the music world.

“We’re celebrating not only a very successful woman, who we were fortunate enough to have live among us for a short period of time,” said Sen. John DeFrancisco during the unveiling ceremony, “but also someone who came from a very difficult circumstance to become world renowned in her field.”

Cotten had married and had children at a young age, giving up her musical talents in order to devote time to her family. After working as a maid for much of her life, as chance would have it, she ended up working for a musically-driven family named the Seegers—it was then that Cotton began to relearn the guitar and her songs began to come into fruition — with the help of Mr. Seeger who would record her while she played around the house.

In 1984, Cotten went on to be, “the oldest female to win a Grammy,” according to the award show’s website. Cotten’s blues style took home the award for Best Ethnic or Traditional Recording for her album, Eliabeth Cotten, Live!, a compilation of some of her best concerts. However it was Cotten’s popular song “Freight Train,” which the ceremony’s program describes she had written at the age of 12, that would set Cotten apart and become an inspiration to many famous musicians around the world. 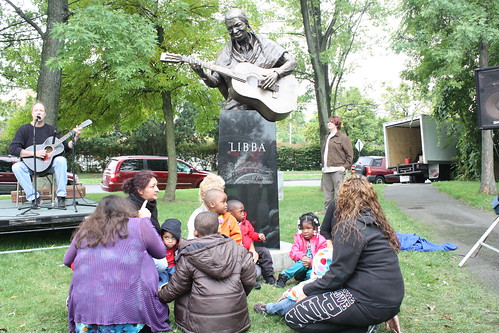 Cotten continued to play well into her later years and right before her death in June of 1987. After moving to Syracuse from Washington D.C. with her daughter and grandchildren, the legendary figure had “The Libba Cotten Grove” park named in her honor in 1983 by the city.

“She extended her genius to a nation … to the world,” said Francis Parks, a pioneer in helping to promote and implement the legacy of of Cotten, during her remarks at the ceremony. “She played with passion and she played with vigor. Let us celebrate her life, and let us acknowledge this space [Libba Cotten Grove], which has been offered to her life’s work.”

With braids trailing down the side of her bronzed face and a guitar firmly slanted across her chest, the memory of Cotten’s legacy becomes a permanent piece of history in the South Side of Syracuse. Designed by artist Sharon BuMann who had initially rendered an actual replica almost 12 years ago, it is hard not to be moved by the towering statue.

Annie Rankin, a South Side resident, describes the importance of such an effigy in their community.

“It means a whole lot. It will show the younger generation things that they didn’t know and teach them something new.”