Tree-lighting Will Go On Despite City Cuts to Holiday Budget

Leaders on the South Side are making it possible for yearly event to be held at 5:45 p.m. Dec. 6

When the South Side heard that the city had cut its tree-lighting funds, the community didn’t let it ruin their holiday plans.

A group of organizers and volunteers banded together to make sure the 12-year tree-lighting tradition continued. With an increase in violence over recent months, this year’s ceremony was very important to the community, said Judy Turner, a South Side native and event organizer.

“We pull together in all types of situations, and I think that’s a testament to the community leaders,” Turner said. “This will make this event even more special because we’ll have to come together collectively.”

City of Syracuse Parks Commissioner Patrick Driscoll also commended the South Side’s resilience.
“The groups that want to step up and help and take pride in their neighborhood, it’s certainly comforting to us,” Driscoll said. “It just speaks to how reliable the organizers on the South Side are.”

This year Driscoll had to cut the $112,000 holiday budget by 30 to 40 percent. As a result, the tree-lighting ceremony on the corner of East Colvin Avenue and South Salina Street was one of 10 holiday events that did not get a tree, lights, bandwagon or sound system. 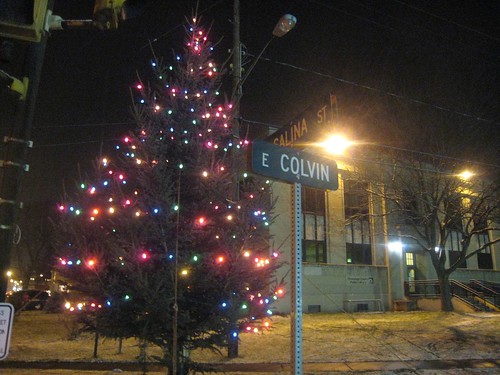 “We’re going to have to make some tough decisions here,” Driscoll said. “Doing something like this now, I think it can only help us as we go forward and try to fix up our facilities.”

The $30,000 to $40,000 in savings will be used to improve park facilities like playgrounds, swimming pools and ice skating rinks, Driscoll said.

For about a year, South Side residents and volunteers have planned in anticipation of the budget cut, said Shirley Harris, event organizer.

“Right now, I’m thinking that we have enough contacts out there that we might find someone that would donate the tree to us,” said Turner in an interview before Thanksgiving.

Turner and Harris hope to get a 14- to 16-foot tree donated for the ceremony.

If they could not get a free tree, the organizers had received a $150 donation to purchase one, Turner said.

“We really love to be involved with community events,” said Katie Hayduke, children’s librarian at Beauchamp. “The community needs it.”

Although the cutback will affect how long the tree stays lit during the holidays, Turner understands the type of economic pressure the city is under. In the past the tree has usually remained lit into the new year, Turner said.

Those who attend the Dec. 6, 2010 event, which begins at 5:45 p.m., will be able to drink free hot chocolate thanks to the Key Bank branch across the street from the tree and the Red Cross of Central New York. Every year more than 200 cups are served, said Mike Kinahan, a disaster action team volunteer with the Red Cross.

“The kids really enjoy it,” Kinahan said. “It’s good to see the kids out, enjoying the festivities.”
Each child 10 and under will also receive a free gift from Santa, Harris said. More than 300 gifts were distributed last year.