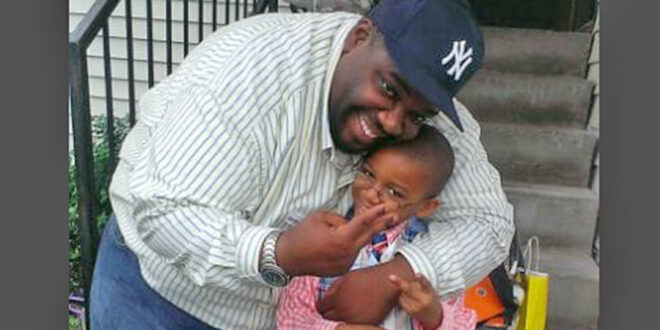 Q: What did it feel like when you became a father?
A: I was nervous and excited. I recorded a video for each of them [at their births] to capture the moment, the raw feeling and emotions that I had. My youngest, Aysis, has her video downloaded to her tablet, so hopefully she’ll have it forever. That video will say it all. With children, there are so many emotions because you’re bringing this amazing new life into the world. But with experience you know the world can be so beautiful and so ugly at the same time. So it’s a culmination of a lot of raw nerve, you know: excitement, fear, love, joy and worry.

Q: What was your relationship like with your father?
A: It was strange. My mother was a single mother for the most part. My father lived in the same city as me but only spent limited time with me. His co-parenting was hit-or-miss. When I think of co-parenting, I think of the full scale of things. You’re involved in the school activities. You’re involved in the medical history. My father didn’t even know who my doctor was. You know, I know who my kid’s doctors are. I have a relationship with their doctor, their therapists, their schools, their extracurricular activities — everything. They know me. And I try to put effort in and actually be involved … unfortunately now my schedule doesn’t permit that as much as I’d like.

Q: How did that relationship impact your approach to fatherhood?
A: My approach is that I did not want to be like that. It pushed me. Fatherhood, it comes two ways: There’s either the choice that a man makes that he says, “I didn’t have a dad and I turned out OK,” and they go with that, or they say, “I didn’t have the father that I wanted, so I’m going to be the father I wanted for my children.” And that was the approach I’ve taken. I’ve wavered in my ways. I’ve fallen into some of the traps of yelling and being stubborn and not listening and thinking that I know everything in the moment. Often parents make that mistake, you’re dealing with a new human being, with a new personality, and no matter how much they are like you in certain ways, they’re that much not like you in other ways. You have to give them the autonomy to be who they are. And often it’s hard to do. That’s easier said than done, and I try not to be a hypocrite.

Q: As a father, is there anything that you do that would surprise people?
A: I speak very candidly with my children. I don’t mince words, and I don’t use cute names for things. I’m very open and honest with my children about finances, more so than some parents. I really break down bills and the payment of bills. A lot of parents I’ve met don’t do that. They question that or they think that it’s unnecessary stress on children, and I don’t think so. It just makes them aware. I’m not asking them to help pay the bill. I just make them aware. With speaking candidly, I refer to male and female genitalia as the proper names. From day one, I don’t make a cute nickname for it. I do explain to my children that people do have different verbiage for these things. That’s another thing that, I notice, stands apart from other parents.

Q: What is your opinion about commonly held stereotypes about Black fathers?
A: Today you have to ask what the structure of the Black father’s role is, because a lot of Black fathers I know don’t live in the same city as their children. So when you’re a non-custodial parent — clearly I’ve been to court, we use terminologies like that — it changes your ability to parent and co-parent. I think that that’s a misconception. And then there are a lot of more successful fathers out there than people know. I’m going to be honest, there are some of my friends and guys I’ve gone to school with, and I know there’s no perfect relationship, but I envy their relationship with their wives and their children and the system that they have. There are a lot of fathers out there that are functioning really well. I think that the spotlight doesn’t hit them enough. They get swept under the rug. But I think that there’s a misconception that Black fathers are more absent than they really are.

Q: Any advice for first-time dads?
A: First, I start with telling my children that I will not lie to them, and that means any lies. So don’t lie to your children. Give them honest information because that’s how they can trust you and trust your word. Don’t focus so much on what you didn’t have or what you wanted to have as a father and instead focus on fathering the child for who they are. Grow with the child and you’ll father them as they need. Some children need more hugs than others. Some children need more discipline than others. But you only learn that as you grow with a child. I think that we have these idealizations that we start off with and it becomes this blueprint for what we’re going to do. If a child doesn’t fit that, we try to make them conform to it, to our own personal standards. And that’s what I’m struggling with now, working on that, because now I have teenagers. The amazing teenager!

Q: Final thoughts?
A: I have expressed my frustrations with being a parent too many times. I do love being a father. I love my children, and I wish that we both understood each other better. I think that there’s a misunderstanding between children and parents that you just don’t get past in one day or one year because children will always see you as this person that is fun sometimes but really doesn’t want them to do whatever they want to do. I’m trying to work on that. I want them to understand that I’m trying to be cautious for their own benefit. Myself, I felt misunderstood by my own parents. I felt like they just wanted to restrict my freedom. And that wasn’t the case. Now that I look back, I think: “Wow, they were trying to protect me.”