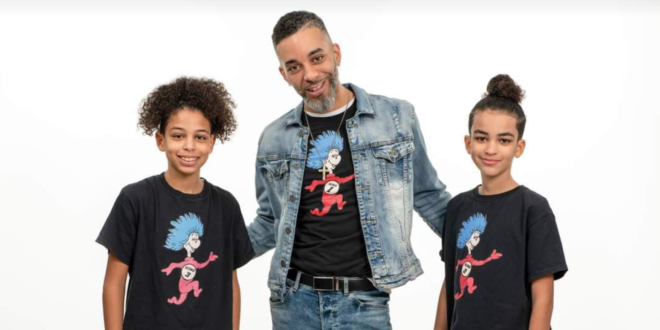 Q: You are raising your two brothers. What did it feel like when you became their guardian?
A: I took custody when our father died in 2015. It’s been really interesting. I’ve gone from being their awesome, cool, outrageous, trouble-making big brother to now the authority figure. It’s been a difficult transition if I’m being transparent.

Q: What can you share about each?
A: Javonte is 15, and Jayden is 14. They’ve been amazing leaders in this time when I quit my job as a fourth-grade teacher to ensure I was a support for them during the pandemic. This was when the real magic happened, and I got to see what my kids could really do. I wound up having seven other children learning in my living room because their families didn’t have the option that I did. It was a beautiful thing to see my two boys teaching younger students, helping them with their fractions and practicing their writing. That’s how they spent the majority of those two years until the other kids went back to school. I couldn’t be more proud of them. They have such high levels of capability, understanding and leadership.

Q: As a father, is there anything that you do that would surprise people?
A: Allow them to parent themselves. I put a lot of responsibility on them, and allow them to make a lot of decisions for themselves. I’ve challenged them and pushed them to think critically. Then we use their experiences to reflect upon and learn from.

Q: Any advice for first-time dads?
A: It definitely doesn’t come with a handbook. You have to remember what’s really important, and that’s to listen and allow them to teach you how they need to be parented. Sometimes you have to be tough. Then with other kids, you have to be gentle and nurturing. It’s all about how well you’re able to listen and respond to what it is that they actually need. It’s easy for our kids to be silenced. So, as a parent, you have to make sure you’re always in tune with that, what it is that they’re really trying to tell you.

Q: What has been a favorite family tradition?
A: We love to watch movies. Nobody talks. We just laugh and react. It’s our favorite thing to do. We don’t always have time to do it, and I thought it would fade as they got older.

Another tradition we love is to explore. We’ve gone on expeditions once a year, and it’s become part of their curriculum, starting when I used to homeschool them. We chart out our course and visit monuments and landmarks. It’s not necessarily a vacation, but we will have some fun in there, too. We’re really fixated on learning — developing both personally and communally.