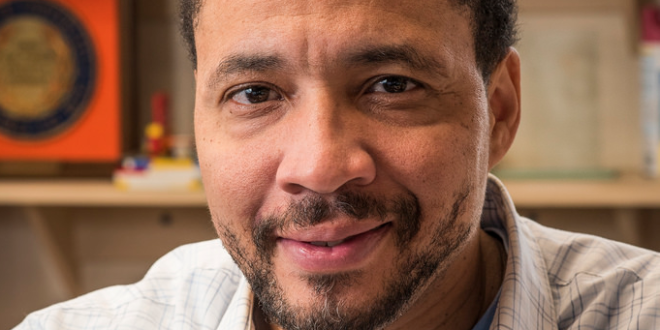 Q: What did it feel like when you became a father?
A: It’s an amazing experience. Something you are never ready for. You can’t go off of someone else’s experience to become prepared because kids are all different, the process is always different. But it was amazing and scary … a ‘what the heck just happened’ moment. I was fine during the delivery. As long as there are no needles, I am fine.

Q: What can you share about your children?
A: My oldest Da’Joura is 21. She likes fashion now. She grew up tomboyish, went to princess mode and then got to junior high and wanted to be a lady. She’s here local and working. She went to school for a year but took this year off; we are trying to get her back. We push all kids to earn a college degree because it helps provide unlimited opportunities. My second is named after me, Lazarus Jr. He’s 13 and a big boy … tall. All my kids are big — were always in the 95th percentile on the growth chart. He is quiet until he gets to know you, kind of like me. Next is LJ, who will be 11 on our birthday. He was born on my birthday, March 28. He was a special birthday gift. He’s a sensitive, loving kid. Always concerned about others’ feelings. My 6-year-old, Da’Zya, is the diva princess, singer and now ice skater. She plays all sports and is taking figure skating lessons. We call her Cookie, which is her middle name. Then my youngest Lobell is 4. He’s the hugger. I pick him up from pre-k and he’s hugging all his classmates, teachers, anyone that walks by. He loves sports and watches with me anytime I have a game on. 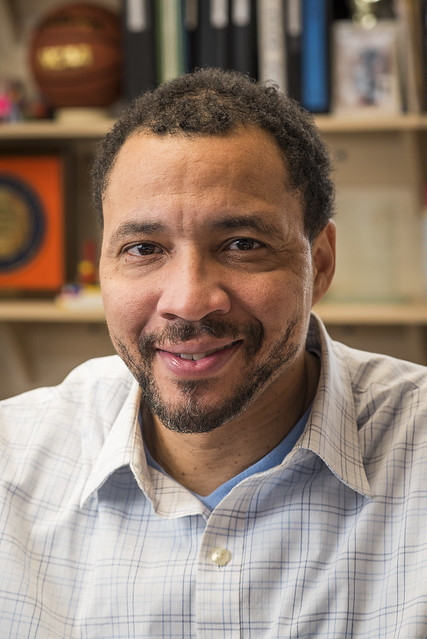 MEET FATHER LAZARUS: Sims, who turns 46 this month, is the commissioner of the Department of Parks and Recreation for the city of Syracuse. He has five children and has been married to Daphne Sims for over a decade. Sims played basketball at Syracuse University from 1992-96. | Ben Cleeton, Staff Photo

Q: As a father, is there anything that you do that would surprise people?
A: I put the kids to sleep and get them ready for school. The youngest ones still fall asleep on me every night. After they fall asleep, then I carry them to their beds. That’s what they grew up knowing. My two oldest, when I would have to go off to play (profession basketball), my wife would call saying she couldn’t get them to sleep because since birth, I would have them on my chest and let them fall asleep. It’s gotten to the point even if I leave to go to the store, they may wake up. I’ll get a call, ‘When you coming home? He woke up.’ With my now 13-year-old, I was traveling a lot with the Globetrotters, but when I did have a chance to be home and he would cry, I would take him outside, lay him on my shoulder and let him look up at the stars. When I would leave, my wife would tell me she’s not doing all that. It’s too late to go walking outside.

Q: What is special about the father’s role?
A: Stability is important, that they know every day they are going to see dad. When they are sick or something happens at school and they call me, they know dad is coming, that consistently dad will be there.

Q: What is your opinion about commonly held stereotypes about black fathers?
A: All my friends that I know who have kids are with their kids. I don’t know one that doesn’t spend time with their kids, even when they are not living with the child’s mom. The stereotype is disheartening because I think we have more black fathers that are with their kids than are not, to be honest. So you get the deadbeat dads, and the notoriety of that more so than the dads that are doing good. It’s sad because in our society it seems that more is publicized on what is bad rather than what’s good.

Q: Can you elaborate?
A: You see it in our community and the city in general. I had events all summer in the community parks and they hadn’t been mentioned at all on TV because we hadn’t had an incident. When the events go great, you hear nothing. You’ll hear that Liverpool held this event today or such and such …. But nothing about Parks and Rec that just held a concert in the park and it was wonderful; packed. But if there was an incident, then you would hear about it … South Side had a shooting today during the … just negativity seems to make the news.

Q: Any advice for first-time dads?
A: You’ve got to do it your way and you’ve got to do it from the heart. I can’t give them a blueprint because each kid is going to give you something different every day. It could be the same incident that happened with my kid, but it’s going to be a completely different situation with their kid. I play basketball with an over-40 league, and we all have kids, and we all talk about it a lot. One will bring up an incident, and another will add that their kid did the very same thing, but it’s always a different scenario. So we find ourselves saying that it’s not just me.

Q: What has been a favorite tradition?
A: We don’t travel as much as we should to let the kids see different things. I met my wife in Seattle while playing ball with the SuperSonics, so when we travel to the West Coast, we all drive. Many people tell me they could never do a drive like that with their kids, but when we do that two-day drive, there’s no issues. No one gets on each other’s nerves; it’s actually enjoyable.

Q: Final thoughts?
A: There needs to be more unity with fathers. Last year, I organized a Father/Daughter dance at McChesney. It was great to see fathers interacting. Also stability is key. You have to be there for your responsibility. No matter how far you try to run from it, they’re there. You brought them into this world. Eventually you’re going to have to face it. I don’t think there’s such a thing as a deadbeat dad, just some people aren’t ready yet. There’s a difference between a father and a dad. A dad takes care and loves, dads are consistent. Fathers are the ones that make a baby. That’s easy; any one can make one. A 13-year-old can make a baby. But the dad is there when you’re sick, they pick you up when you fall. And you’ll know that you did it right … the kids may not always show that they love you, but when they get in a tough spot and they call you, you know that you did something right.