Q: What did it feel like when you became a father?
A: It was a rush of excitement and the feeling that I have to be responsible all the time now because this little person is depending on me.

Q: What can you share about your children?
A: We have Aniya, who is 16. She’s my independent one — even when she was young. She used to sit around with the adults and listen to music that is even older than me and like it. She was always well-behaved and didn’t cry. She made it seem like parenting would be simple. Then came Azzuré. She’s 12 now. She had to be the quickest birth. We rushed into the delivery room and 20 minutes later, we had another girl. She was the complete opposite of her sister — she was a bit clingy. But now she has come into her own. Then Leroy, who is 8. He was a difficult birth and can be the more challenging, since he’s the only boy. But his memory is incredible, and he’s very intelligent. Then we have the 3-year-old, Ariana. She was the surprise. She’s smart beyond her years; her vocabulary is incredible. Sometimes I feel like turning around and making sure it’s a preschooler I’m talking to. She’s like my little shadow. 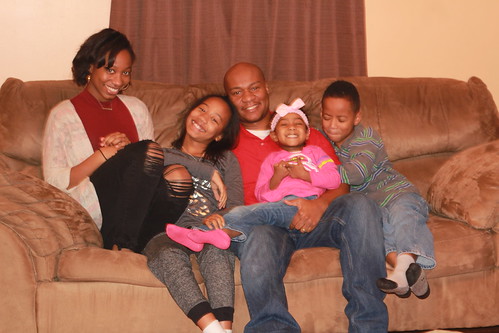 MEET FATHER LEROY: McClain, 38, has taught at the Southside Academy Charter School for 14 years and is a father of four. Here he sits with his children: Aniya (left), Azzuré, Ariana and Leroy. McClain will soon celebrate 12 years of marriage to his wife, Mariama. | Perfection Rivers, Staff Photo

Q: What was your relationship like with your father?
A: Incredible. My father is a bishop of God’s Temple of Faith church,located at the intersection of South Avenue and West Colvin Street. My whole family grew up in the church. My father always set the example — sometimes it was a silent example and sometimes it was vocal. And I think that mindset carried over to me. I’m super neat and like to get things done.

Q: Did he have a saying that you catch yourself repeating today?
A: If and when I tell the children to do something, I tell them to do a thorough job. It was always (from him) not do a good job, but I want the job to be done thorough. When I say it, I can hear my dad’s voice in my head.

Q: Why are fathers important?
A: They are the head of their household. That is what I was taught. They are the leaders, and they instill a sense of security in the family. They raise the boys to be the men they are supposed to be. And even though we raise our girls to be princesses, we let them know they can be independent and do things on their own. But I want to let them know that having someone to lean back on and gain security from is good. I see a lot of my students come from a one-parent household. They end up calling me dad a lot. I show them caring, like I do my own children, but never let them off the hook. All are responsible for their actions. So with my daughters being my princesses, it doesn’t mean they don’t have responsibilities. They are expected to grow up, get an education and be well-rounded women.

Q: As a father, is there anything that you do that would surprise people?
A: Every morning before dropping her off to daycare, I do my 3-year-old’s hair. I learned by watching my wife. But if somebody sees me doing it, I tell them ‘Shhhh. Don’t tell anybody!’ Once when my father saw me doing it, he then shared with me he used to do my aunt’s hair when his mom would go to work. So I found out I’m not the only one that does hair, but he never told me that until he saw me.

Q: What is your opinion about commonly held stereotypes about black fathers?
A: I see the absence. With my students and some of the young men around the neighborhood, there’s just an absence there. They ask me a lot of questions about what I do when I get home; can I stop by? And they do. And some of my students from the past will contact me to let me know what they are doing, because I served as a father figure in their life. I had one student that got caught up in gang activity, went to jail and then came back. He finished high school, walked the stage at graduation and then came straight to my house the next day to share his success. So I try and serve as a role model and be a steady figure for them.

Q: Any advice for other dads?
A: You’re not going to be perfect. You’re going to do some things wrong and think back on it and wonder how you could have done it better. But that’s a part of growing. When you grow, you become better and that’s how wisdom is achieved. Once you experience it, you have a better outlook and are able to give that good advice now. You grow with each child.

Q: What has been a favorite tradition?
A: For my family, it’s vacation. Growing up, I’d be in the back of the minivan and be wowed how my father would drive for 12 hours with everyone together. And we’d all be falling asleep. While he’d drive, I’d just think, ‘I can’t wait to do this with my family.’ Now, every summer I try and surprise my family. I act like we’re not going anywhere, and then we take off. And right when they think vacation is over, I take them somewhere else. Every year they say this is the best vacation, and they’ve said that on the last three. Last summer we went to New York City, to Virginia, to Myrtle Beach, but it was raining. So we came up to Virginia Beach to Ocean City. It was a 10-day trip, and I did all the driving. My wife tried to do some of the driving, but she doesn’t like rain or that dark-dusk feeling. So as soon as we switched, it started storming and she had to pull over. I think it was a sign that I need to drive, because as soon as I got in the driver’s seat, it stopped raining.