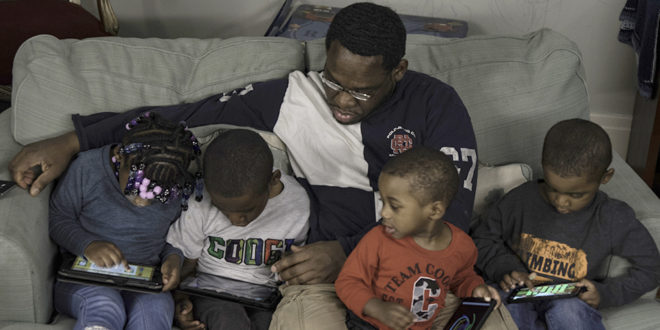 Q: What did it feel like when you first became a father?
A: I’m in a unique situation because I have a goddaughter that is three years older than my oldest child. So I had — kind of — already been through the parenting stage of handling an infant for the first time before I had my own.

Q: What was that like, being asked to be a godfather?
It was humbling. When my goddaughter came, I had to shake off some of my rough edges and become more gentle, especially because that child was a girl. Even with my own, I had to slow myself down. My longtime friends have noticed that even at work or church, I take my time. Children made me a more conscious person. 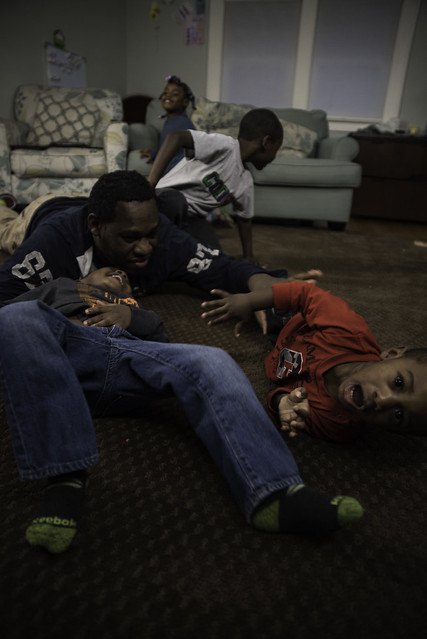 Q: What can you share about your four children?
A: The oldest is Jaaziah, 7, who is in first grade. He’s definitely a nerd. Very intelligent and very protective, which surprised me because he bullies his siblings. But when they are out in the world, he does not allow anyone else to bully them. He’s also very, very athletic — constantly climbing. All around a beautiful, healthy, happy baby. Number two is Akeli, who is 5. I call her my first lieutenant — she runs the ship. She makes sure everybody brushes their teeth, wears their seatbelts, sits in the right place at meal time … She’s definitely the commander-in-chief of the household. I see it as her way of loving, to ensure there is structure in our lives. Number three is Giacobbe, 3. He’s the emotional one. He’s very affectionate and at the same time can flip the switch at any time. Overall, he’s very loving, caring and affectionate. The last, Zakari, 2, is the dictator. He can be a grouch, the ruler, the controller. We love him to death, but he can have his evil streaks. He also has the biggest appetite in the household and is the fighter out of the bunch. I credit that trait to him making sure he’s not bullied since he’s the baby.

Q: And which is most like your wife?
A: Number three. They are both excessively loving individuals.

Q: What was your relationship like with your father?
A: We didn’t have as much of an opportunity to spend time together as both of us would have liked. He worked as a truck driver. On top of that, I went to a boarding academy. When we did have opportunities, it was great. Many memories of watching football together. My favorite team is because of him. He’s a Buffalo Bills fan, and back then I was a Houston Oilers fan. One of the things the Bills are famous for is going to the Super Bowl and losing four straight times. Every year they seem to go through Houston, and that’s how I became a fan of theirs.

Q: As a father, is there anything that you do that would surprise people?
A: How much of a dictator I am. Especially when we’re out. I refer to them as the Hit Squad. Because I have four children, referring to all of them by each individual name, isn’t fast enough. A lot of people are taken aback by that — in a positive way. I can just say, ‘Hit Squad, fall in’ or ‘Hit Squad, suit up’ — meaning put their jackets on. It’s just too many kids to be calling all their names. It’s easier to use one mantra to get all of their attentions. So I think others casually applaud that system of control I have in place. The name Hit Squad comes from a rap group from the late ’80s, early ’90s. It was my brother’s favorite growing up.

Q: What is your opinion about commonly held stereotypes about black fathers?
A: The typical one, that we are absent, deadbeat dads, does not resonate with me. Out of 20 guys in my crew, I’d have to admit that maybe there is one. Even as I drive down the street, I see fathers walking with their children, wishing that I was a millionaire so I could buy them a car so they wouldn’t have to trudge through the snow with their kids. More so now, black fathers are there. It’s agitating to hear that narrative that they are absent. Especially if you are to consider the full situation — those that are absent may be ‘caught up in the system’ … oftentimes a black male could end up spending years in prison over even a small drug charge. Now that person is out of their children’s lives for something real little. The world that we are subject to automatically places us into a negative narrative. This makes it difficult for black fathers to be successful. It’s constantly an uphill battle. Not all are successful, but it is disheartening that the narrative pushed paints a picture of somebody that has quit. The whole story often isn’t revealed — it could have been through all types of ups and downs and lefts and rights … after being damaged by life and society.

Q: Any advice for first-time dads?
A: Be yourself. As a parent, you’re only the first personality that your children meet. You become that foundational voice in their head, but it pretty much ends there. Then the world molds them. It can be bad, but it’s good, too, because you want your children to be able to navigate the world. Also, consistency is key. I think that has helped me a lot in grooming my children in becoming respectful adults. Being consistent in what I say and do helps them know what to expect. Like with the Hit Squad mantra, at certain points in the day, if I say it, they know exactly what’s happening. If it’s bath time, they all will go directly upstairs. If it’s meal time, they know to run to the dinner table. That makes it easy to negotiate the day.