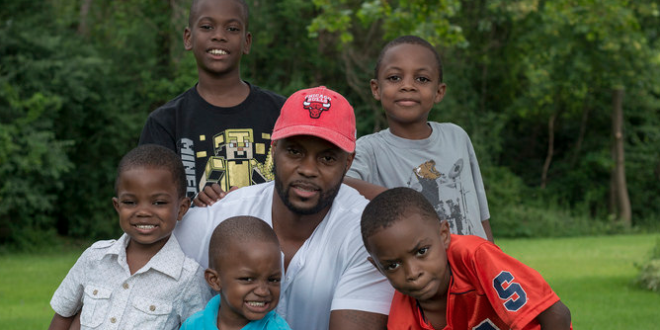 Q: What did it feel like when you became a father?
A: I was nervous at first, because I didn’t grow up with my father. So I didn’t really think I knew how to be a father. After the first year, I got used to it and enjoyed having him around. Then they just all started coming. 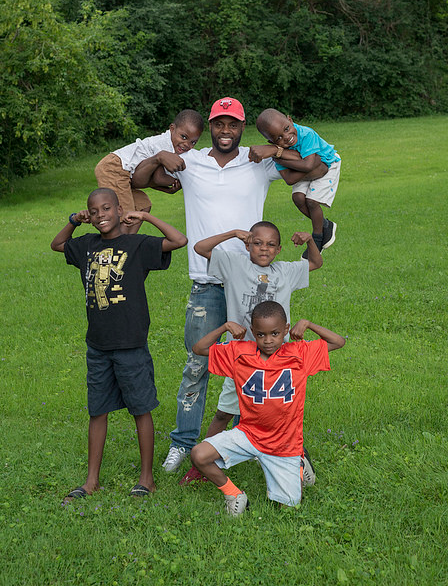 Q: What can you share about your children?
A: I have five boys — all with different personalities. I can say it is definitely busy in my household. Ricky, 10, who is not my wife’s biological son, lives in Maryland but comes up for the summer, some holidays and birthdays, and we visit him some, too. He’s very laid-back like myself and is my firstborn. He’s not as much into the sports I’m into, but very interested in wrestling. Amir, 8, is a busybody — he has to move all the time; he cannot sit still for even two seconds. Zion, 7, is very adventurous, asks question after question and wants to learn. He wants to know everything. Micah, 4, loves sports and is always on YouTube watching plays. He thinks he’s Ezekiel Elliott from the Dallas Cowboys. He’s a sports guy. Gavin, 3, is the most talkative one at that age. He learned faster than the rest of them because he was watching his brothers. He was potty trained a couple months after turning 2 and speaking in full sentences by 3.

Q: Did you always want a big family?
A: Growing up, no. I didn’t even want to get married when I was in high school, but I guess God works in mysterious ways.

Q: How did you meet your wife?
A: It’s weird actually. We went to the prom together in high school. She went to Nottingham High School, and I went to Corcoran. We met at one of the basketball games. Then we went off to college and weren’t together. We were away from each other for about five years, and out of the blue, I just called her. We’ve been together ever since. We both went away to college and then returned to Syracuse. She went to Canisius, and I attended SUNY Canton.

Q What was your relationship like with your father?
A: I really didn’t have much of a relationship with my father. When we would see each other, we were cordial, but I can’t say he was present. As far as father figures, I took heed to my uncles and older cousins, who would give me good advice when I needed it. I was mostly a self-learner and picked up on what was right and what was wrong. I was raised by my mother and grandmother, but they couldn’t do everything like a father could have provided.

Q: What is unique about the father’s role?
A: It’s very important to be in your kids’ life because it’s very easy for them to get distracted and do the wrong thing. So guidance is a major thing — especially with boys. Guidance is the key for boys. If they don’t get that love from a father or mentor, they are going to seek that love from somewhere else and it could be a negative force.

Q: As a father, is there anything you do that would surprise people?
A: I wouldn’t say people would be surprised because people know I’m with my boys a lot. But they may not know that every weekend I bring them up to the football field and practice with them, take them to every karate practice. It just may not be known that nearly all my free time is spent with them. 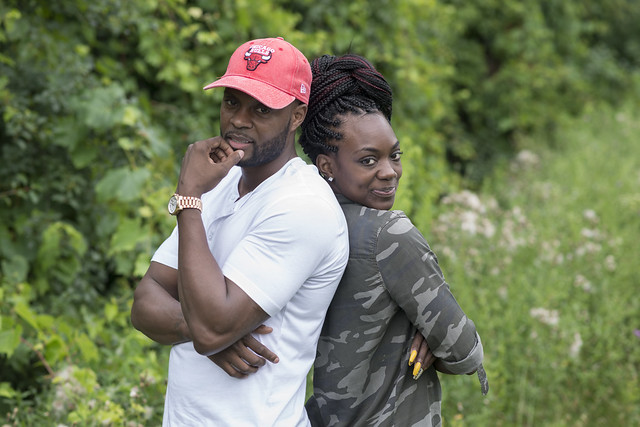 Q: What’s your opinion about commonly held stereotypes about black fathers?
A: Statistics wise, I think the stereotype rings true, especially in the lower-income areas. That probably is true. But I can’t speak for everyone. I know that I am a good father, because I didn’t grow up with a model but still do the best I can for my sons.

Q: Any advice for first-time dads?
A: Just be there. Being there physically is most important. You can’t buy their love and want your kids to respect you later in life. Some of the fathers I do know, think probably because they didn’t grow up with a father, either, say ‘I bought them this and bought them that’ and think they are doing great, but don’t put in any time.