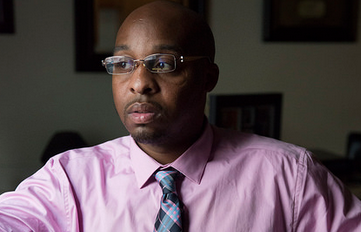 Q: What did it feel like when you became a father?
A: I was young, 17. I was excited and a little fearful. When she delivered the baby, I was in jail and didn’t get to see my first one born. But I got to name him. She was in the hospital, and they wouldn’t let her leave without a name. She called me, and I named him from jail. I got to see him a week after he was born. 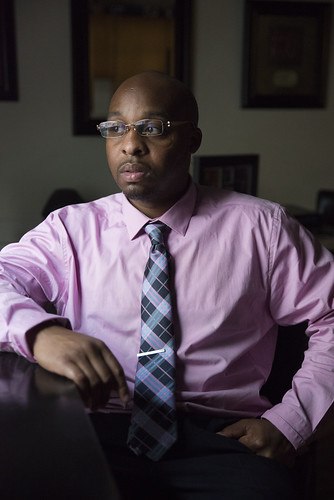 MEET FATHER QUANTE: Wright, 30, made headlines this summer when he lost his job selling cars after being featured on the Sunday cover of The Post-Standard. He is a father of four. | Ben Cleeton, Staff Photo

Q: What can you share about your children?
A: First son is Te-Quan Sincere, age 12. He is outgoing with a strong personality. He already knows who he is, which is surprising for being so young. Second son is a month apart from first. Katron Chavis, age 12. He is cool and humble. He is more laid back. He’s a little sneaky, though. My third is De’aura, age 8. She is like her older brother Te-Quan. She is very smart. But, being the only girl, she is spoiled and wants her way. My fourth is a newborn going on six weeks. His name is Maximus Amer’e. I’m still learning him, but I can tell he’s going to be a temper tantrum. He throws fits already, especially when he wants to eat.

Q: Which child is most like you?
A: The first son. He’s identical. Me all over again. I didn’t name him after me. He’s not a junior. I just flipped my name to make Te-Quan.

Q: What was your relationship like with your dad?
A: I didn’t have a relationship with my father. Growing up he did come around when he stayed in Syracuse. Once in awhile, he’d take us to the mall, me and my little sister. Buy us some new sneakers or something. But it was a tough situation; he was married and cheating on his wife with my mother and creating kids. So there was a lot of conflict. That kept him out of my life, rather than the way it was supposed to be.

Q: Why are fathers important?
A: Fathers give guidance. Having a father around gives kids balance and provides that other parent to also rely on. And fathers are protectors.

Q: Is there a saying or advice you always give?
A: My key is education. I always encourage my kids to do good in school. My mother instilled in me to always get up and go to school. So I preach heavy to my kids about the importance of getting a good education.

Q: What do you think about assumptions held about black fathers?
A: It’s statistically proven that there are less black fathers living in homes with their children as other races. And a lot of black fathers, it’s sad, but a lot of us end up incarcerated, and we miss a great portion of our children’s lives. But I also know a lot of great black fathers, and I consider myself one of them. But unfortunately, I did miss a lot of time with them. But I always try and do my best.

Q: As a father, is there anything you do that would surprise people?
A: I used to go shopping for them. I was at a store shopping and I brought my cousin with me. He was joking, saying ‘Wow, you really shop, like really shop.’ And I just responded, ‘You know, my kids got to look good.’

Q: Any advice for other dads?
A: Encourage fathers to be there even through hardships that one may face in their lives. And try and be there even if separated from their mother. This can make the barrier even harder to communicate with the children, but you need to still put effort into having a relationship with your children and work to communicate with the mother. Through communication, there is a greater chance to build that bridge and allow both parents to be available to the children. Also, our children look up to us, and they mimic everything, so you’ve got to be mindful of what you say and do around them.

Q: Final thoughts?
A: We should have a national fatherhood day. Mothers get most all the attention, but there are a lot of men who take full custody of their children, and they don’t get acknowledged for their work. Everything gets geared toward the mother. Even Father’s Day is just another day, so we should have a national fatherhood day to recognize the dads that are working hard and being there for their kids and even for men that are mentoring and taking care of others’ kids. That should be acknowledged. Maybe that is something we can start.