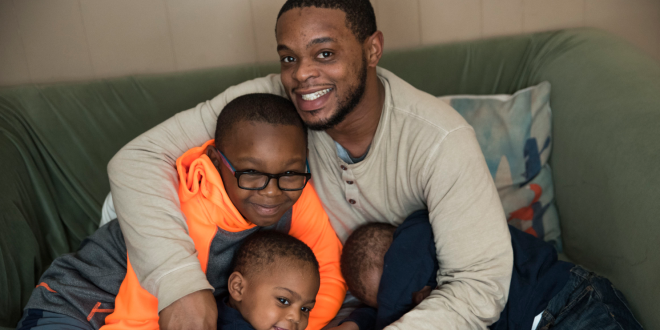 Nominated by his wife who says despite working the third shift at UPS, he always finds time to play with his boys

Q: What did it feel like when you became a father?
A: It’s an overwhelming feeling. I think as a guy you don’t really know what to expect. During the pregnancy, I didn’t really feel anything — wasn’t excited or nervous. It wasn’t until I held them and looked at them, then I felt this overwhelming sense of responsibility and love and nervousness and anxiousness and excitement — all at once.

Q: What can you share about your children?
A: EJ, which stands for Edmund Jamir, is the oldest at 9. He’s always been a good kid. He was the only nephew and only grandchild on both sides for a long time … and just a little spoiled. He plays baseball, basketball, the saxophone and is on student council. I think a lot of his mom rubbed off on him because he’s grown to be well-rounded. The twins will be 2 in February. Carter came first. He’s usually quiet, but recently he’s seemed to come out of his shell. He’s the oldest of the twins, but he acts like the youngest. Everything about him seems like the younger brother. He’s very loving and cuddles. He likes to whisper and he’s gentle. And then his twin is the exact opposite. Cameron, who we call Cam, will wrestle and likes to watch Spider-Man, play football or tumble with his older brother. 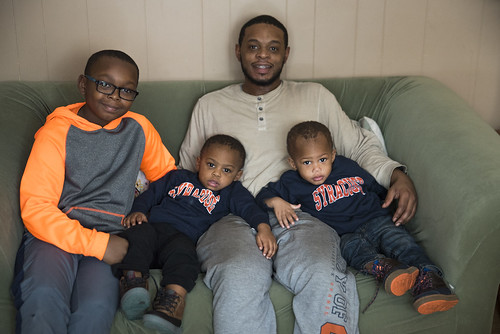 MEET FATHER SHERROD: Taylor, 31, grew up on the South Side and works the third shift at United Parcel Service. He is the father of EJ and twins Cameron and Carter. | Ben Cleeton, Staff photo

Q: What was your relationship like with your father?
A: He grew up without a dad so I think he took it a lot more personal to make sure he was always around. I feel I wouldn’t have any good karma if I didn’t take good care of my kids like he did. He made sure we did things and took trips as a family. Because of that, I want to make sure I take my kids places and that we do things together. Kids who are underprivileged don’t have that or have things to look forward to. It makes it easier for them to get tunnel vision, get stuck and not have confidence.

Q: Is there a saying you have or that your father had?
A: (As Sherrod thinks, EJ shares.) “Papa says, ‘You can’t see with tears in your eyes.’” (Laughing, Sherrod confirms.) Yes he used to always tell me that. He’d come to my baseball games and he’d want me to play so hard I’d get frustrated. EJ did the same thing the other day while playing basketball. After the game, we were walking out and he started crying. I asked what was wrong, and he said, ‘I feel like I let you down.’ I said ‘as long as you tried that’s all that matters and I don’t feel like you let me down.’ Then I said, ‘but you can’t see with tears in your eyes, and it’s slippery out here, so wipe your face.’

Q: Why are fathers important?
A: I feel like there’s some things that you can’t pick up from your mom. It’s just good to have, even if it’s not your biological father but to have a father figure, to get another perspective. I didn’t realize how important my dad was until I got older. It probably would have been a lot different for me with these guys if I hadn’t had my dad, because I had his model to go off of.

Q: As a father, is there anything you do that would surprise people?
A: We don’t fall into a lot of the gender-specific things. I try and cook dinner more than the average ‘stereotypical’ dad, but it’s also because of my hours working the overnight shift. It’s just what works for us. If I’ve got to do laundry that day, then I’ll do it. But even just saying that sounds — like because you’re a dad — it’s surprising that you’re cooking or doing daily chores. When she got pregnant with the twins, I switched to the third shift because she was in law school and with my previous schedule, we couldn’t predict when I’d get home. This way ended up being more convenient for the family. The sleeping transition was tough, but in general it’s better because I can see them more and even surprise my wife with coffee on her lunch break.

Q: What’s your best meal?
A: Cowboy. EJ says this is his favorite. It’s what you make when you just have a bunch of stuff and no real idea what to do. I decided to scramble some hamburger, throw some cheese in, rice and baked beans and mix it all together. It reminded me of those old Clint Eastwood westerns where they’d eat the beans out of the can over the fire, so I called it ‘Cowboy.’ They liked it and so it stuck.

Q: What is your take on the assumptions commonly held by society about black fathers?
A: It’s frustrating to hear the stereotype when I see so many people who I know who do a good job and work overnights and do whatever they got to do to make sure that their kids are OK. Then you have the one or two people who don’t take care of their kids. In my eyes, the ratio I see is maybe different than the — I’m not sure what the national rate is of black dads being active in their families — but in my eyes, I see more people taking care of their kids than not. 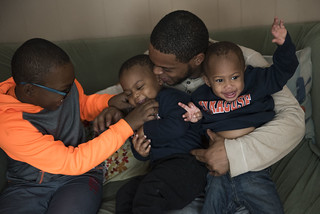 Q: Any advice for other dads?
A: Live by example. It’s easier to practice what you preach. You have to have patience and understand that your kid isn’t you. You just work to instill in them positive values and morals and let them know what’s right from wrong and hope that they make good decisions. Then you have to just pray for the best after all that. You can teach your kid everything in the book but now days one mishap and things can go awry. I worry with my oldest. He’s only 9, but he’s big and he could be considered a 12- or 13-year-old. With the Tamir Rice thing, the gun did look real but at the same time it just sucks that it seems like he didn’t get a fair chance to put the gun down. Then you have to come home and explain to your kid first off not to play with weapons and all the rest. There’s a lot of small things that you don’t realize until you have kids.

Q: What is a favorite family moment?
A: The best days we have — because she’s doing so much, just out of law school and working — and EJ has sports and activities. If we can just get a Sunday where we can all hang out together and sit on the couch, at this point that is our biggest reward. To have everyone together, content and no crying. To watch the boys wrestle and play. When he (pointing to the more reserved Carter) jumps in, too, and all three are playing together, for me and her to sit back and watch them all smiling — that’s the best thing.