When a girl started to pick on Cora Smith her freshman year in high school in 2010, she responded with alarming rage. Cora, 14, pulled the sleeves of her sweatshirt down, put her hood up, and went to work. Cora grabbed the girl by the throat, dangling her off the floor. She threw a punch that missed, denting a locker.

“Cora’s not the ‘fighter type,’ ” she said into the phone. 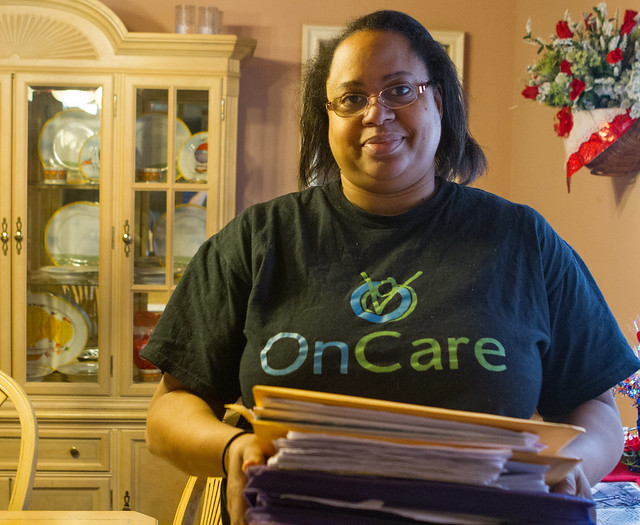 Khreltz Vest holds her daughter Cora’s file. If her house is ever on fire, Vest said the first thing she’ll do is go into the house to grab the box with her children’s files. She said that she can get a little singed, as long as those papers don’t get lost. | Glorianna Picini, Staff Photo

Then Vest wondered aloud if Cora had adjusted her sleeves and hood. Had her voice grown deeper? The teacher answered in agreement. “Congratulations,” Vest said. “You guys met ‘Marshall.’ Because ‘Marshall’ is the one that fights for her, Marshall is the one that does it.”

“Marshall” was just one of Cora’s personalities. Cora was diagnosed with Borderline Personality Disorder and Bipolar Disorder in 2009 on her third hospital trip to BryLin Hospitals, which is a private psychological hospi- tal in Buffalo. Entering high school, Cora recalls having eight different voices.

“Marshall, Bella, Andrew, and Tron. … Eight voices, but only four of them had names,” Cora said.

Now, Cora is 17 and trying to function despite everything that has happened to her. She attends Nottingham High School, where she is a junior. She lives on the South Side with her mom, dad, two brothers, sister- in-law, and her niece. Cora has been living without the voices in her head since summer 2012. Throughout this journey, both Cora and Vest have decided to speak out and let others who are suffering find help, like they did. But, it was a long struggle for them to reach this point.

“The more we were in the hospital and the more we saw doctors, they kept saying, ‘Your daughter is very complicated and hard to diagnose,’ ” Vest said. 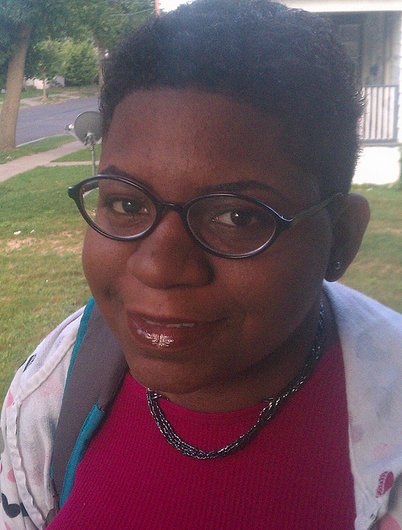 Cora and her family were able to find the help that Cora needed through OnCare, which describes itself as a “federally funded community initiative that improves outcomes for Onondaga County children and youth ages 5-21 with significant behavioral and emotional challenges.” Since OnCare was established in 2010 with a $9 million federal grant, 116 parents and 145 youth/young adults have been involved. The parents and youth have participated in their own counseling and care and also have represented OnCare at state and national events.

OnCare is a place where families can become more aware and actually have a say in what is going on with their children, Vest said. She acknowledged that OnCare does not have all the answers, but helps coordinate the many different services children and young adults — especially minority populations — may end up juggling. When Cora and Vest sought treatment from OnCare, they had already been seeing doctors, but felt the doctors didn’t always listen. OnCare put them on the ACCESS team, which helps coordinate everything.

The expenses, however, are not covered by OnCare. Vest receives a stipend for Cora’s care because when she adopted her, she was considered a possible “problem” because of her developmental disabilities. They also are on Medicaid.

OnCare reports that four out of five children who experience mental health symptoms do not receive any treatment. Some 17,500 children in Onondaga County between 5 and 18 have a mental, emotional or behavioral challenge, according to OnCare’s 2011 Community Report. Half of the 145 youths who have been involved with OnCare are 11 to 15 years old. The majority of the patients are male — 66 percent — while 54 percent are white and 24 percent are African-American.

“One of the most exciting achievements this year was awarding $1.4 million in funding to local agencies to create 13 new programs to meet the needs of children, youth and families,” states OnCare’s 2011 Community Report.

But before OnCare stepped in to help, Vest and Cora were still having issues at home.

There was the time, Vest recalled, that started with yet another call from school. Cora’s pulse had dropped to 37, and she was on her way by ambulance to the hospital. Vest was so worried, she beat them there.

Doctors determined they should take Cora off her medications, without consulting her psychiatrist, and with disastrous results, Vest recalled. By 3 a.m., Cora was threatening the nurses and had locked herself in the bathroom. She talked about killing herself and others.

Vest again hurried to the hospital, this time to find nurses gathered outside of Cora’s room, afraid to enter. Vest edged to the bathroom door and asked Cora what was going on. Cora replied in her deep voice, saying, “I want to go home.”

Vest knew immediately that “Marshall” was in control again, and she was able to defuse the crisis.

Now, Vest remembers when OnCare first started to make a difference in dealing with such crises. She took Cora to an OnCare meeting, where many representatives were gathered. Under the OnCare model to coordinate services and care, there were teachers, doctors, people from juvenile justice and a judge, all of whom have been involved a great deal with Cora since her episodes began. Vest remembers sharing with them all — at once — how Cora was struggling. They circled a table and asked Cora about her episodes and medicines.

“I’m really tired of them telling me what the medication is supposed to do,” Cora told the group, “because when I’m taking it and I try to tell you that’s not what it does … they don’t listen to me.”

Vest had watched her daughter work her way through many different medications and doctors through the years before OnCare. This was the day, she recalled, when things changed and she finally was able to share with a group some of the awful side effects that plagued her: low pulse, weight loss, and shakes. Vest recalls a representative from Onondaga County Mental Health seated at the table, who spoke up: “We need to find out how the patient is reacting to this medication.”

Even though things can be difficult for Cora, she is trying to cope the best she can. One crucial part is keeping on track with medications, but in a combination that works better. She takes Lithium 300 mg, twice daily; Zyprexa, 5 mg in the morning and 15 mg at night; Propranolol, 5 mg twice daily; Benztropine, 5 mg twice daily; and Metformin, 500 mg twice daily.

The voices are gone.

Cora also sees her therapist once a week and looks forward to when she will go maybe every other week. 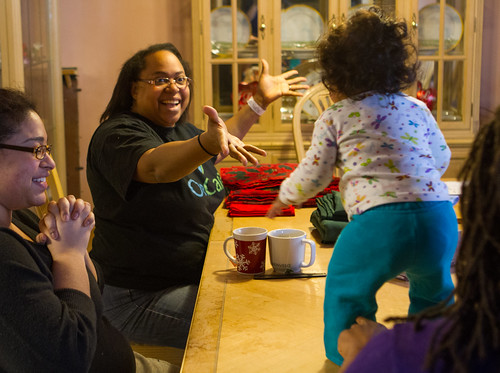 Khreltz Vest holds out her hands with excitement as her granddaughter walks across the table towards her. With her father tapping the back of her shins and her mother watching, the little girl walked three steps before stopping- her new record. | Glorianna Picini, Staff photo

It is not a seamless improvement, though. Cora recently had a cutting episode and was admitted to Hutchings Psychiatric Center in Syracuse for help. Cora and Vest understand that episodes like this may happen.

For Cora, cutting herself is sometimes a way to cope with problems. Vest says it is her way of releasing pain. “She is hurting inside and doesn’t know how to get rid of it, so if she gives herself physical pain, it lessens the emotional pain,” Vest explained.

Linda Lopez, who is the director of OnCare, said the ACCESS model is important.

“Families didn’t know where to call when their child was really struggling,” Lopez said. “Families expressed over and over that they didn’t know how to navigate this complex system of services that we have in our community, so the ACCESS team is actually a one-stop shop for them. The ACCESS team has on it mental health staff, child welfare staff, criminal justice staff, and parents who play a professional role in the ACCESS team who have life experience.”

OnCare also offers a support group every Thursday for the youth to come and talk with one another. This is a safe haven for the youths with mental illnesses to meet with other individuals going through the same issues.

Bruce Brumfield, director of Youth Involvement, said the sessions help the youths discover what they need. “We want individuals to hear their story and we also want an individual to be able to speak with their mom, their provider, and their doctors … because the youth or child knows what’s wrong,” Brumfield said.

Brumfield said he’s seen a lot of the youth gain confidence through the support group, but it is all based on how much the individual wants to get from OnCare. Brumfield says his mission is for the youth to be happy and be an advocate for change. Staff members teach the youth how to accept their mental health challenges, and they also share advocacy skills so they can become more aware of their own mental illness.

This encouragement has helped Cora write her story on paper. Cora wrote a paper as a school assignment, explaining in detail what she has gone through with her Borderline Personality and Bipolar Disorder. This story has helped others see what Cora is going through on a daily basis with her mental illnesses.

Bipolar and Borderline Personality Disorder are not often heard in everyday life. Bipolar is known as a mental illness that causes people to have episodes of severe high and low moods, according to WebMD. Borderline Personality Disorder is a mental illness with intense mood swings, impulsive behaviors, and severe problems with self worth, according to WebMD.

Dr. William Wittlin, a local psychiatrist who sees adults, adolescents, and children, said though he cannot speak specifically about Cora’s issues, he has had patients with both Bipolar Disorder and Borderline Personality Disorder. Wittlin said professionals first need to get the patients to explain what it means when they cut themselves. Wittlin said Borderline Personality Disorder and Bipolar Disorder aren’t related specifically in psychiatry, but it’s not uncommon to be diagnosed with both of these mental illnesses together.

“My guess is that the issues around her Borderline Personality Disorder probably have to in part be dealt with through psychotherapy, or some other form of therapy instead of medication,” Wittlin said about why patients might cut themselves even when on medication.

In one of her writings, Cora describes how she feels about herself in comparison to other people.

“I am not crazy or ‘working without a full deck.’ It just means that I am working with a different deck.”