When Brenda Taylor thinks of the starving and the hungry, it’s not another country on the other side of the globe that comes to mind.

She thinks of herself and her neighbors.

“They talk about Third World countries … but you got people here that are starving to death,” Taylor said. 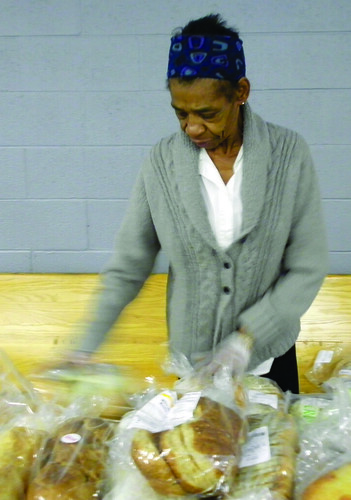 A volunteer prepares bread at the center. The center also serves items like fruits and yogurt. -- Photo by Brandi Kellam

Brenda Taylor has met people on the South Side who are starving, and she and her husband can relate. As she sits in a chair in front of the Valley Worship Center Church of the Nazarene, she recalls her story.

“We were here five days and my husband got seriously injured on his job,” Taylor said.

Shortly after, they got news that their grandchildren were in foster care – and found themselves raising not two or three, but seven of them. She said there were times she didn’t know where their next meal would come from, but somehow they managed.

“You’re constantly worried,” Taylor said, “about how you’re gonna feed the kids or if you’ll lose the house.”

Taylor volunteers at the Valley Worship Center food pantry because it connects her with people who need help putting food on the table.

A Community of Their Own

At the food pantry, people meet each other every month. For some of them, it’s their first time at a food pantry – for others, it’s a home away from home. Yet, whether it’s a first time, occasional, or regular visit, there is something shared when everyone gathers during the fresh food distribution: stories of life, struggles and hope.

The monthly fresh food distribution usually starts at 3:15 p.m. But on this day, by 2:30 p.m., people had already gathered in the church lobby. An older woman spoke about how she was denied help by the government.

“I remember one time I tried to go on disability and they refused me,” said Ann Valerino, an 80-year-old with white curly hair and holding a cane. Valerino said she was told she could work sitting down.

According to the Food Bank of Central New York Hunger Study, 5 percent of households that use food pantry services are elderly.

Icelyn Parks, who takes care of her granddaughter, described the uncertainty of her job as a nurse’s aide. “That doesn’t help me much, but it’s better than nothing.” She had only been working a few weeks when she lost her check because the woman she takes care of went into the hospital.

At the food pantry, “80 percent are returns and 20 percent are new each month,” said assistant pastor Claire Pietra. She said many families that didn’t need help before need it now because of the economy.

And when they gather to take home the fresh cauliflower, apples, bananas, breads and yogurt, they also take home with them the experiences of struggle that they hear from one another.

“What we’re seeing is the working poor – although they are doing everything they can do – just don’t have enough income,” said Tom Slater, who is executive director of the Food Bank of Central New York.

In September, the food pantry helped some 71 households including 250 people.

According to the Food Bank of Central New York, 42 percent of households that use its services had to choose between paying for food and paying for rent.  In fact, people who skip meals in order to pay for expenses are growing in number because of the economy.

Food Bank Director Tom Slater said the increase in need for food bank services comes from a growing number of people who are making it, but discretionary money is their food money, which means that unexpected expenses could result in a missed meal.

In addition, 45 percent of people using food bank services have lost a job in the past two years.

“Emergency food is not a long-term solution,” said Slater, who added that food banks are supposed to be a last resort but many, because of their condition, are using the services on an ongoing basis.

There are at least 11 emergency food pantries on the South Side. Slater says the Food Bank is working with each one to make sure that visitors get what they need.