After losing sight, Donna Reese adapts and brings her message to others

Donna Reese said she used to have problems with both her night vision and her peripheral vision, but she didn’t think about it much.

Then, one night, driving home from work, she found she had trouble seeing. Reese, former president of Syracuse’s chapter of the NAACP, blamed it on simply being tired. 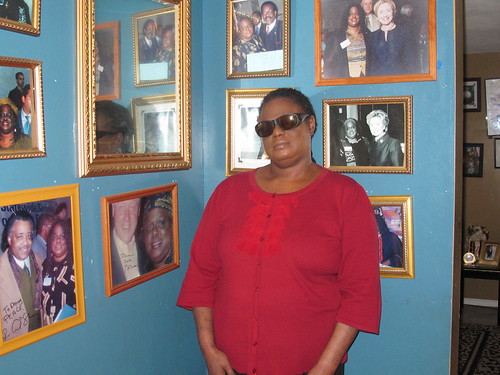 Donna Reese, former president of the Syracuse NAACP, stands in front of a display of pictures of her with famous figures.

Not long after that incident, Reese, who had been battling glaucoma for more than a decade, completely lost the sight in her left eye and some in her right.

“Things started getting blurry — and one morning I woke up and couldn’t see anything,” she said.

Her daughter drove her to the hospital, where her sight continued to deteriorate. Her condition stumped the doctors.

“I formed a hole in my cornea,” she said. “So I had to get emergency surgery to patch the hole in my eye, or I would have lost my eye.”

That happened in 2007. Three surgeries later, Reese, 48, has become an advocate for people facing similar situations, while working to educate people who might not believe similar problems could happen to them.

Those who hear her speak have found her story so touching that she recently brought an audience to tears and applause at an event at the University Sheraton. The April event, called “Dessert in the Dark,” was sponsored by Aurora of Central New York.

Audience members did a blind taste test of desserts to find out what it is like to be vision impaired. Then Reese told her encouraging story.

Part of what Reese tells her audience while speaking is the journey traveled to get to where she is now. Today, she can use the Internet, cook for her family and get around town.

“When this first happened, I was angry at everybody, at the world, God, just everybody,” Reese said. “Then I realized that wouldn’t help anything.”

If Reese is going to a place unfamiliar to her, she takes her cane. Katie McCormick, former orientation mobility specialist for Aurora, an organization that helps people with vision or hearing loss, helped Reese become comfortable using her cane as an aid.

McCormick said she was assigned to Reese and visited her at her home about six times. The first two times she worked with Reese moving around the house. After that, they ventured outside with her cane.

“The cane is the thing people fear the most,” McCormick said. “It’s a huge step for so many people.” 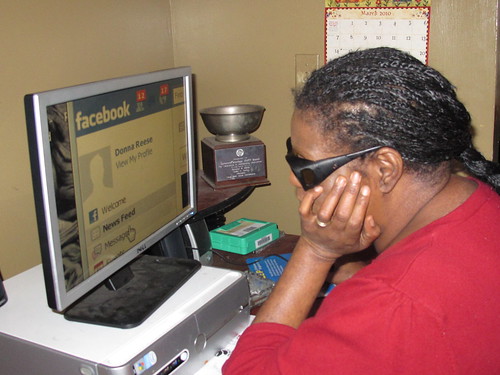 Donna Reese has found ways to adapt to her disability. She uses a computer by zooming in to aid in her vision loss.

Reese said she was very reluctant to use her cane at first.

“My pride just wouldn’t let me use it,” Reese said. “But when I wanted to get my independence back, I knew I had to learn to use this cane.”

Reese now interns at Aurora three times a week as an advocate, trying to connect Aurora to the African- American community.

“There’s a lot of people out there like me that don’t know these services are out there and don’t know how to access them,” Reese said. “Or people like me that, when it first started happening, kept it secret because I didn’t want to be judged or looked at differently.”

Reese’s mother, Betty Jane DuBose, has lived with Reese for the past six years since DuBose’s husband passed away. When her mother first moved in, Reese took care of her. But when Reese started losing her vision, the tables turned.

Reese said her mother, 87, took care of her and helped her around. Now, however, they cook together and spend even more time with each other.

“I’m always proud of my daughter, whatever she does,” DuBose said. “I know my husband is proud of her, too.”