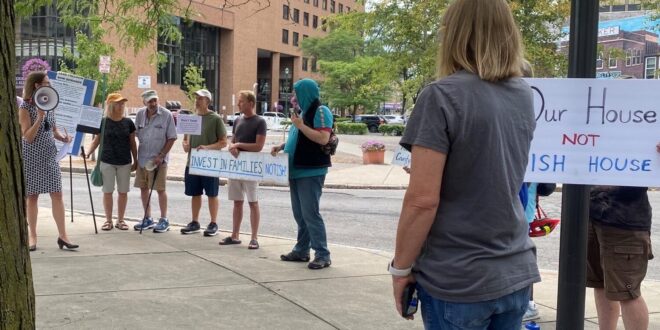 South Side resident Ida Stewart knows how she would spend the county’s $85 million surplus: Health care for seniors and children, food security, housing, and on the fight against lead poisoning, for starters.

Not on her list? An aquarium for Inner Harbor, the brainchild of County Executive Ryan McMahon, whose proposal for the tourist attraction passed the legislature on Tuesday by a 9-8 vote.

Stewart and other community members who protested before and during the vote say the move squanders a once-in-a-generation opportunity to better the lives of the city’s poorest and most vulnerable residents.

“We are inundated with poverty caused by a lack of foods, lead poisoning and other entities,” Stewart said. “Therefore we strongly are against spending money on fish for an aquarium when our children, our adults and our seniors are lacking in healthcare and food and housing.”

Dozens of protesters held up signs and chanted as they shared their stories of the life-altering effects of lead poisoning. Lead is toxic and particularly harmful to children as it slows the development of the parts of the brain that control decision making, emotion regulation and impulse control.

Darlene Medley of Families for Lead Freedom Now! said she has two children who have been affected by lead poisoning and called for the county to do more to protect future generations from the lead, which is toxic and particularly harmful to young children. Medley has worked to lower her children’s lead-levels, but was dismayed to find her home is still contaminated and that services for children affected by lead poisoning are difficult to access.

Mary Cunningham, also of Families for Lead Freedom Now!, warned of the dangers of lead poisoning as she read a statement from Jamie Howley, a community activist.

“Lead is a powerful neurotoxin and the brain damage it creates will follow them for the rest of their lives,” Cunningham said to the assembled protesters. “In school they have troubling learning, trouble holding a pencil, trouble learning to write, trouble sitting still and following directions.”

Young children absorb 50% of the lead they are exposed to, Cunningham said. She criticized a move away from calling the condition “lead poisoning” as more people adopt the term “lead exposure.” But she said children are poisoned the minute they are exposed to lead and that the change in terminology minimizes the risks.

“Lead poisoning kills brain cells,” Lane said “ Just like the returning veterans that we have had from recent wars, our children have brain damage. We call it nontraumatic brain damage.”

The city of Syracuse has over three times the childhood lead poisoning than Flint, Michigan, Lane said. The problem has gotten worse since COVID and tends to be concentrated on the South Side and in other communities of color in Syracuse.

April Santana writes about the information environment in communities of color. Her work is funded by the Knight Foundation’s Combating Disinformation in Communities of Color grant and a Syracuse University SOURCE grant