When Dr. Mustafa Awayda settled in the United States in 1993, he suffered from a bit of culture shock.

Yet after that first year, Awayda began to realize that treating his patients in the United States was not that different than in Lebanon. 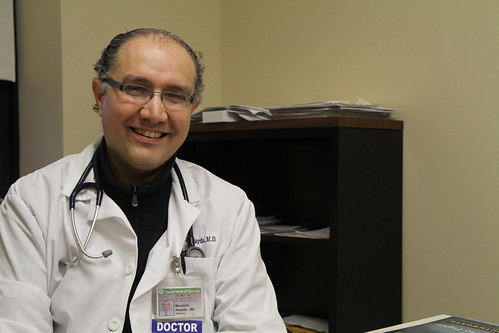 Dr. Mustafa Awayda sits for a moment in his office at 5 p.m. before starting work at the VA Center on Irving Avenue in Syracuse. | Steve Davis, Staff Photo

“Overseas, people think that in the United States they have it all, and unfortunately people here have everything BUT all,” Awayda said. “Attending to these people in two different parts of the world, I think poverty has the same face and speaks the same language. People are in need and people are reaching out regardless of where they are.”

Awayda has continued to see and help that need throughout his 20 years in Syracuse. The husband and father of three is a respected member of the community through his years of work at the Syracuse Community Health Center and VA Medical Center. Now, Awayda is adding one more job title to his impressive list of achievements: medical director of the new Rahma Health Clinic.

The Rahma Health Clinic, located at 3100 S. Salina St., recently opened to serve the needs of the uninsured members of the South Side community. Some 11.6 percent of Syracuse residents do not have health insurance, according to a 2011 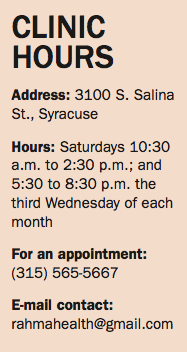 report from Excellus Blue Cross Blue Shield. Patients must make an appointment to visit the clinic during business hours, from 10:30 a.m. to 2:30 p.m. Saturdays and 5:30 to 8:30 p.m. the third Wednesday of each month.

Since its unofficial opening in November, there has been a steady influx of patients, according to Rahma Clinic founder and Awayda’s friend Magda Bayoumi. While there were just three patients the first day, recent weeks have seen as many as 12 to 15. Perhaps even more surprising than the number of patients, however, has been some of their stories, Bayoumi said.

“There was one woman who came to the clinic who is a part-time nurse and can’t afford healthcare,” Bayoumi explained. “She works as often as she can and she fills in for other nurses, and it’s amazing that here is someone who is providing healthcare for others and she can’t even afford healthcare for herself.”
Awayda has years of experience treating uninsured patients. His medical career started in Lebanon, where he graduated from medical school at the American University of Beirut in 1991. For two years, he traveled back and forth between Lebanon and the United States, seeking a hospital to continue his medical education and training like several of his classmates in Lebanon. He decided to settle in Syracuse and started residency training at Upstate University Hospital in 1993.

From there, Awayda spent four years as a primary doctor at the Syracuse Community Health Center, followed by seven years as the center’s medical director. The center provides quality healthcare at a lower cost than private doctors. Now, he works fulltime at the VA Medical Center as a doctor of internal medicine in addition to volunteering at Rahma.

At the VA Medical Center, Awayda is one of the hardest working doctors, according to co-worker and friend Dr. Tomas Vence.

“He often comes back to help after hours just to see if patients are OK,” Vence said. “I can’t even think of a specific example because he does it so often. He is here late almost every day.”

While Awayda works as a hospitalist at the VA Medical Center, he also chose to become an HIV specialist after an experience he had in Atlanta. 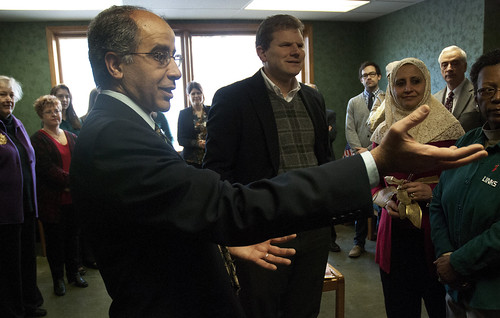 Mohamed Khater, President of the Rahma Health Clinic Board addresses Congressman Dan Maffei and the crowd at the grand opening of the clinic on Feb. 16. | Kayla Rice, Staff Photo

“In 1991, I did a month rotation at Grady Memorial Hospital when I was still a student,” he said. “More than half of the wards were packed with patients dying from some form of HIV or AIDS, and that really affected me.”

Awayda now volunteers once a week at the Community Health Center’s HIV Clinic, which he helped to develop. However, Awayda has more than a full-time job and volunteer work on his plate.

“I am everywhere,” he said.

Awayda helps with the Crouse Hospital hospitalist program and works with the Medicaid Managed Care organization Total Care. He is also pursuing his master’s degree in Syracuse University’s Masters of Public Health program.

Besides his patients, however, Awayda has a few other important people in his life. Awayda’s wife, Fatme, also works as a physician in Syracuse. She is a doctor of internal medicine and rheumatology for Upstate and the VA Medical Center. Despite both of their heavy workloads, they are a family-oriented pair, according to Vence.

“I admire (Awayda). He is a good friend, father and husband,” Vence said. “His wife is a busy person, too, and they have triplets — which is not always easy to handle when you’re both working.”

With both mom and dad in the medical field, however, the Awaydas’ teenage triplets — Yasmeen, Karen and Kamel — already have expressed interest in following in their parents’ footsteps, according to Awayda.

“They are freshmen in high school now, and it’s interesting to see the uniqueness of their interests,” Awayda said. “My son wants to be an orthopedic surgeon and one of my girls wants to be a migraine specialist, a neurologist.

“They love the field, but I’m glad they didn’t just replicate our liking. They’ve adopted their own interests.”

The entire family is heavily involved in the Rahma Clinic, according to Bayoumi. However, their volunteer work is not just 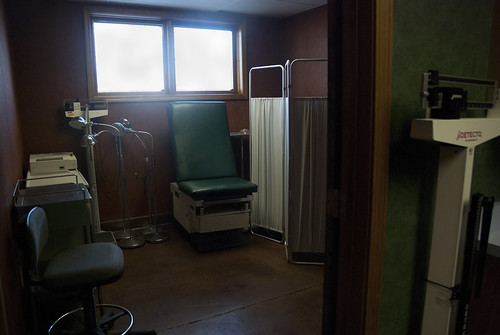 The mission of the Rahma Health Clinic is to provide high quality healthcare to the uninsured, indigent and under-served adult members of the South Side community regardless of ability to pay, and regardless of religion, race, gender or background. | Kayla Rice, Staff Photo

about healthcare, she said.

“The kids come to the clinic to help with raking or cleaning, and their parents bring them and show them that this is what our vision is all about,” Bayoumi said. “They say, ‘This is what you need to be as a human being.’ It’s not just you go to school and be a great student, it’s that you give back to the community. You can see the difference in the kids. It’s such a loving family.”

That loving family, while busy, is determined to see the clinic succeed. The goal is for the clinic to eventually open every weekday, Awayda said. For now, however, they will continue to do what they can twice a week for the South Side community.

“Every single patient at the clinic has said, ‘You are doing something phenomenal,’” he explained. “The feedback has been overwhelming.”