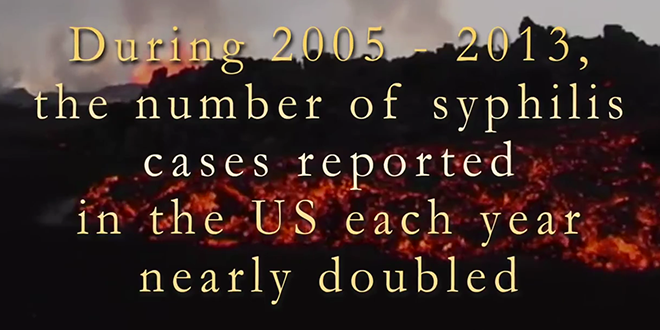 It is important to know the signs of syphilis, how it’s diagnosed and how it’s treated

Between the years 2008 and 2014, the number of syphilis cases in Onondaga County has increased more than 1,800 percent.

What are the symptoms?
Syphilis develops in stages, and symptoms vary with each stage. The stages may overlap, and symptoms don’t always occur in the same order. Syphilis infection can go undetected and without any symptoms for years. Syphilis has four stages: primary, secondary, latent and tertiary.

Each stage can last for several years, but syphilis is most infectious in the first two stages.

During the first or primary stage of syphilis, one may or may not notice a single sore, called a chancre, but there may be multiple sores. The sore is the location where syphilis entered the body. The sore is usually firm, round and painless. Because the sore is painless, it can easily go unnoticed.

In the secondary stage, the bacteria spreads through the blood to the skin, liver, joints, lymph nodes, muscles and brain. A rash frequently appears about six weeks to three months after the original chancre has healed. The rash may cover any part of the body, but tends to erupt on the palms or soles of the feet.
If syphilis is not treated during the primary or secondary stages, the infection moves to the latent or hidden stage. This happens after the primary and secondary symptoms have disappeared, and there are no symptoms.

About 15 to 30 percent of people infected with syphilis who don’t get treatment will develop complications known as tertiary or late syphilis. In the late stage, the disease may damage the brain, nerves, eyes, heart, blood vessels, liver, bones and joints. These problems may occur three to 15 years after the original, untreated infection.

If untreated or treated in the late stage, syphilis causes irreversible neurological and cardiovascular damage.
Most newborns with congenital syphilis have no symptoms, although some experience a rash on the palms of their hands and the soles of their feet. Later, symptoms may include deafness, teeth deformities and saddle nose — where the bridge of the nose collapses.

How is syphilis diagnosed?
The diagnosis of syphilis is most commonly made by blood testing. Some health care providers will diagnose syphilis by testing fluid from a syphilis sore.

The Centers for Disease Control and Prevention has issued a screening and treatment guideline for syphilis and other sexually transmitted infections, or STI.

According to these guidelines, a non-pregnant woman should be tested for syphilis based on her risk: if she is positive for other STI; has a bisexual male partner; is a commercial sex worker; is incarcerated or her male partner is incarcerated; or she uses intravenous illicit drugs.

A heterosexual man should be tested also based on his risk: if he is positive for other STI; has commercial sex worker exposure; is incarcerated; or uses intravenous illicit drugs.

A homosexual man should be tested every year and more frequently based upon his risk: if he has multiple or anonymous partners; has sex in conjunction with illicit drug use; has sex partner(s) who participate in these activities.

How is syphilis treated?
Penicillin antibiotic is the treatment of choice for treating syphilis. If detected early, syphilis may be cured with a single dose of penicillin. The antibiotic is also fairly effective in treating the later stages of the infection.

— Article by Shante Harris El, FNP-C and The Stand board member