South Sider Shares Positive Outlook on Life with Those Around Her

There are few age lines on her face and there is a brightness in her eyes that makes you feel warm and comfortable.  She wears a silver necklace with a cross. And when the words “breast cancer” are brought up, she looks up and thanks God for allowing her to live.

At 73 years old, Emma McDonald is a recent breast cancer survivor going on her third year of being cancer-free. It’s not a new illness in her life. Her father, her husband — and most currently, her daughter — have been diagnosed with it. 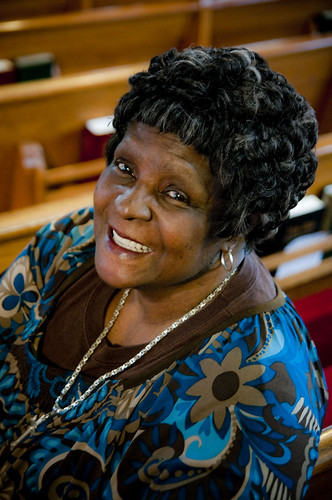 McDonald, who moved from Birmingham, Ala., to Syracuse, found sanctuary in Hopps Memorial Church many years ago, with the death of her father in 1964.

“I was so angry with God because I didn’t understand why he had taken a great man who was loved and took care of his family,” McDonald said. Her father gave in to lung cancer, and that year a church member turned her life around in dealing with death.

Hopps has helped McDonald get through the many ups and downs of her life.

“When I came to Hopps Church they received me with open arms,” she said. “The Southern hospitality was here and that is why I joined.”

Her husband was diagnosed in 2001 with colorectal cancer, and went through surgery, chemo and radiation. But it was melanoma that took his life, after a chance discovery.

“I purchased a pair of house slippers … and there was a little tack at the bottom of that slipper and it pricked his foot, towards his heel, and he never did tell me it had become inflamed,” she said.

Because of that, doctors at Crouse Hospital discovered his cancer and confirmed he wouldn’t tolerate treatment this time.

“My husband told the doctor that he knew if they could do anything, they would save him, but that his life was no longer in their hands,” McDonald said. “He said he was ready and had lived a good life next to his children and wife.”

In the summer of 2009, McDonald visited the doctor because she felt something under her left breast.

Although she went through the examinations the doctor recommended and got checked by the breast surgeon, they found nothing.

After returning from a family reunion in Atlanta, McDonald insisted to the doctors that she needed to get a needle biopsy of her left breast.

“Dr. William Schu did the needle biopsy on Monday and told me he would call me Friday for the results,” McDonald said. “He called me Thursday.”

McDonald was at Chase Bank on University Avenue when she received the phone call. “I can remember his voice so vividly,” she said. “He said, ‘Your suspicion was right, the fluid came out cancerous.’ ” She opted for a mastectomy because she didn’t want to run the risk of the cancer recurring. “I am a black woman, in a certain age group, and I knew the best decision was to get the mastectomy instead of the lumpectomy,” she said.

Although she was living with cancer, McDonald didn’t get frightened or agitated.

“I thought to myself, ‘Emma, you’re going to go through the storm. You’ve been through many storms by now, and you’re going to get through it,’ ” she said. “And I did, without shedding a tear throughout it all.”

McDonald’s inner strength played a crucial role in 1979, when the soup kitchen at Hopps was launched.

“We had a lot of backlash from people in the church that didn’t want to allow people from the streets to come into our church to receive food because they smelled,” she said. “And so I stood up in front of that lectern and told them that these people were God’s children, regardless of how they smelled or how they looked.”

From that day on, the soup kitchen has been serving community members  hot meals in a brown paper bag.

Although the word “cancer” makes people’s heart drop, McDonald has learned to embrace and learn from her own experience with the illness.

“I have more compassion for people than I used to. Going through cancer has made me grow and it’s made me stronger and wiser to do what you can do now, today, not tomorrow or the next month.”