One day in 1989, Vanessa Johnson saw an African-American boy acting out in front of her art gallery.

After chastising him for his behavior, the two made a deal: If he would go to school and complete his homework, she would pay him to work at her store. After he told her about a teacher portraying Africans as “monkeys with tails in trees,” she promised to send him to Africa. 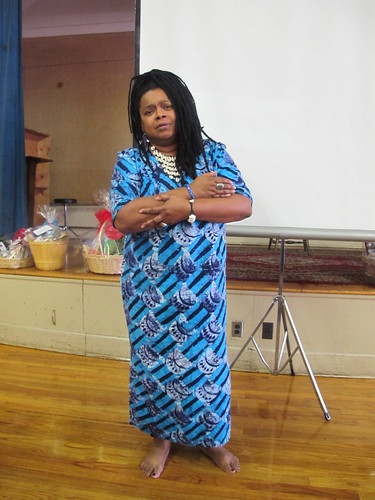 “I said to him, ‘The best way to know something, whatever it is, is to see it for yourself,’” said Johnson, 56.

She then created Syracuse Africa Bound, an organization that seeks to educate youth about African culture. The first trip – to Dakar, Senegal, in 1990 – included six adults and three children. Johnson opted out of the inaugural trip because money was tight.

In spring 2014, Johnson will permanently move to Accra, Ghana, to be with her husband, who is Ghanaian, and to launch the Africa Bound Center for International Exchange, which she will oversee. The center will officially launch Aug. 1.

The center will give professionals such as artists, writers and intellectuals the opportunity to do their work and give back to the community, too. It will include an after-school program and a reading library. Johnson will work for the cause without a salary.

“I’m hoping that what Africa Bound (there) will look like in the future are these young people who have gone through Africa Bound (here),” said Johnson, “who become adults who are looking for a job, and they will consider a job at the Syracuse Africa Bound Center for International Exchange.”

Six to 10 girls, three chaperones and two or three college interns are expected to participate in this year’s trip to Ghana, which will to take place in July for 17 days. The trip will cost roughly $3,000 to $3,500 per child, with roughly $1,720 for air travel.

Parents are responsible for airfare. The advisory team runs four major fundraisers per year. This year, they are asking children to help plan two fundraisers of their own, such as a car wash.

Johnson and a half-dozen others put the program together back in 1989.

At that time, the Southwest Community Center agreed to be their nonprofit oversight and let them use the facility. The center provided the yellow fever inoculation for free, and Ellen Blalock, a longtime photographer for The Post-Standard, took photographs of the students for their passports.

Students and chaperones raised money for the first trip, Johnson said. It took them one and a half years to finance a two-week trip to Dakar during winter break in 1990. That year, flights cost $1,500.

Initially, more than 70 children were signed up for the first trip, but their number eventually trickled.

The cost of the trip and the negative stereotypes of Africa at the time turned people away, said Najah Salaam, a doctoral candidate in executive leadership at St. John Fisher College who participated in the first trip at the age of 12.

“To be Afro-centric or to promote poor youth going to an African country, it just was unheard of. People weren’t doing it,” Salaam said. “And so at the time, anything that’s new, people are supportive of it until they see the time and effort that takes place to make it come to fruition.”

The trip usually consists of visits to the slave and fort castles in Cape Coast; the home of sociologist, historian and civil rights activist W.E.B. Du Bois; the National Museum of Ghana; the Center for National Culture; the Ashanti King’s Palace; the Kumasi Fort and Military Museum; and the artisan villages that surround Kumasi, a city in Ashanti in southern Ghana. They also visit a clinic or hospital.

But what sets Africa Bound apart from other travel programs for students, Johnson said, is that every trip itinerary caters to the interests of the students themselves, functioning as a “consensus network.” For example, one year, the group was interested in art and culture, while another year, it was environmental issues.

“It’s not a travel service. It’s very different,” she said. “Even how we set up the program itself and where we travel and what the flavor of that travel is, is by consensus of the kids that become a part of it. So it looks different every time.” 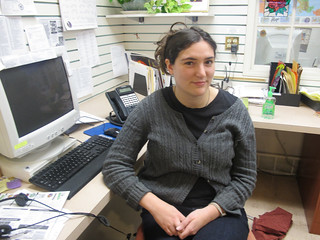 Kimberly McCoy, one of the community engagement organizers for ArtRage, served as a chaperone for the 2005 and 2006 Africa Bound trips. | Madina, Staff Photo

Kimberly McCoy, community engagement organizer at Art Rage, was a chaperone for the 2005 and 2006 trips. “I think she puts more faith and trust into youth than some other people might, and that is important to treat people like adults,” McCoy said of Johnson. “To not settle for less.”

After that first trip, the program also stalled over money and organizer burnout. But the Sept. 11, 2001, attacks on the World Trade Centers in New York City prompted Johnson to restart it.

A trip was planned for 2010 but was canceled because of consternation over the earthquake in Haiti. The number of participants dropped substantially in 2011 because of the economic downturn, with only one child, his mother and Valerie Escoffery, co-coordinator of Africa Bound, traveling.

Past Africa Bounders say Johnson is a fun and protective leader who helped expose them to a part of the world they had never seen.

“She was always kind of watching out for us and explaining things to us and she just had such a rich knowledge of the Ghanaian culture and history, and the people just loved her, all wanted to be around her. She was just great,” said Seamus Kirst, 23, who traveled with Africa Bound in 2008. Kirst works for The Doe Fund, a nonprofit organization that helps formerly homeless individuals.

Johnson had initially thought of the Africa Bound Center for International Exchange as a place where Africa Bound students could stay, but the center will now give professionals a chance to interact with the community.

Brandon Ellis, artistic director of The Dance Theater of Syracuse, and Shaina Bradford, a dancer there who practices modern jazz and ballet, are scheduled to visit Ghana in 2015. They would be paired with a Ghanaian artist who practices Ghanaian art, and as artists they would exchange their art forms.

A final community performance would highlight their art forms separately as well as meshed together. At the highest level of community involvement, children in the community would be included as part of the performance. A percentage of all profits will go toward scholarships to cover students’ travel cost. Professionals would then only be required to pay for their food and the cost of traveling in Ghana.

“It will be set up on a sliding scale: The more that you are involved in community projects as an artist or writer or intellect or whatever your field is, the cheaper it will be to stay there,” Johnson said.

Johnson will also be running an after-school program for children in her community. There will be a computer lab in the center where these students can interact with elementary and junior high students in other countries via closed Facebook sites. For example, junior high students might have a discussion on Facebook about how the government shutdown in the United States would manifest itself in other countries.

For some, the trip to Ghana shaped their academic pursuits. Kirst, who studied history and ethnic studies at Brown University, said his interests in impoverished or marginalized groups in the United States and developing countries stemmed from the trip.

“A huge part of that curriculum was focusing on different groups that are marginalized within specific societies,” said Kirst, “so I definitely think that being in Ghana and seeing kids who are left in orphanages and seeing poverty in your face on the streets was definitely a life-changing experience for me.”

McCoy, who completed an internship at the Ghanaian Trade and Livelihood Coalition, said that the trip influenced her interest in peace and social justice issues.

Though Salaam was already exposed to different cultures by way of growing up in an Islamic household, she said that going to Ghana and seeing the culture made a difference.

As a result of her experiences during the trip, she – a Spanish teacher at Corcoran High School at the time – and Ray Panek, an English teacher at Clary Middle School, started S&P World Tours, a youth travel academy that takes high school students overseas. They traveled to Costa Rica and Mexico, for example. Fundraising efforts are similar to those of Africa Bound.

Salaam said that the key to Africa Bound’s success was that Johnson was persistent in pushing her vision and dedicated to helping inner-city youth see African culture. 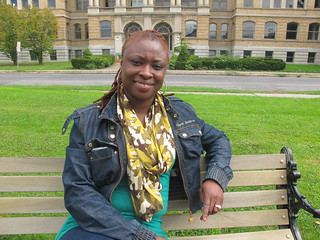 Najah Salaam, a doctoral candidate at St. John Fisher College for executive leadership, participated in the first trip to Dakar, Senegal, at the age of 12. She is shown here in Billings Park in Syracuse. | Madina Toure, Staff Photo

“She had a vision,” Salaam said. “She believed in her vision despite the obstacles that were there and through her vision, she was able to help youth — black youth — become exposed to cultures outside of the inner-city community, and that’s important.”

Johnson said they are currently looking into ways to supplement remaining costs they are unable to cover through fundraising efforts. She is considering creating a website where Africa Bound goods such as bookmarks and bracelets would be sold.

Escoffery, one of the co-coordinators of Africa Bound, will continue to be involved in some capacity, but Johnson is currently looking for someone to serve as executive director.

Leaving Syracuse after 26 years will be hard, Johnson said, but she hopes that Syracuse Africa Bound will continue to attract students in Syracuse while she maintains the program in Ghana.