If secured, money to be spent on trash cans, repainting and fixing street lights

Frank Galloway sits at the back corner of the Midland Discount Market, perched on a stack of milk crates. His job at the market is simple: keep people from loitering.

Galloway, 32, who’s lived on the South Side of Syracuse his entire life, said he routinely sees litterers toss their trash on the small patch of grass he oversees.

“When people come to the store, they always buy something and walk through that little cut,” Galloway said. “We’re living surrounded by trash, so obviously people don’t care about where they’re living.”

It’s not an uncommon sight in the neighborhood. Along the streets and especially near the corner markets, bits of candy wrappers and empty bottles litter the sidewalks and grass.

Two years ago the South Side streets were lined with city-provided trash cans. But after repeated vandalism, they were removed.

Now, if an expected $500,000 state grant comes through, the city plans to bring some of them back. Officials from Sen. David Valesky’s office said the half-million dollars, if secured, would be spent in the area between Kennedy and Newell streets. Some of the funds would be spent on basic upgrades on the neighborhood streets — repainting signs and fixing street lights. 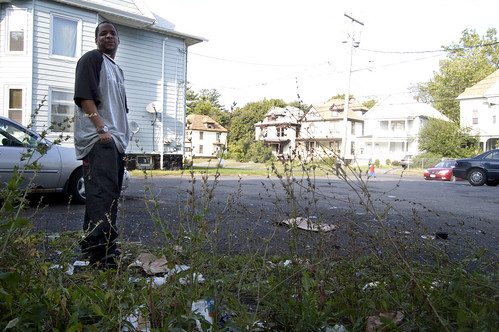 There’s not a single city garbage can on Midland Avenue. And in some of the neighborhoods, the only “trash cans” are the plastic shopping bags residents hang from front-yard trees.

“I see people litter all the time,” Galloway said. “This whole street used to be trashy until the old people started putting their little trash bags on the trees.”

“(The city is) going to be marketing the fact of keeping it clean in our area,” said Mike Atkins, the former Common Councilor for the Fourth District. Atkins said recently he’s been hearing more complaints from South Side residents about the appearance of the neighborhood.

There’s an off-white trash can just outside the entrance of Deb’s Convenience Mart on South Salina Street. Less than 10 feet away: water bottles, straws and candy wrappers smashed into the black asphalt.

Mitchell, who lives across the street from Deb’s, said she’s guilty of littering in the area, even though there’s a trash can on her way out of the store.

“I think it makes everybody look bad,” Galloway said. “It makes us look like trash.”