More than one hundred Syracuse University student volunteers spent Saturday, April 16, cleaning up parks, revitalizing streetscapes and restoring landmark buildings on the South Side. The project, called The Big Event, was the year-end project for SU’s OrangeSeeds organization, a leadership-training program for first-year students.

“The Big Event was a great way to get first-year students working on civic engagement projects and involving themselves in the Syracuse community,” said Greg Victory, director of first-year and transfer programs at SU.

Victory said community members identified every clean-up project as a need, and the volunteer group worked closely with the Southside Community Coalition to integrate themselves into the neighborhood. The primary focus was reviving a five-block stretch around South Salina Street, Victory said.

OrangeSeeds has sponsored a version of The Big Event every year since its creation in 2004, with Victory as the group’s staff adviser. The group, open to all first-year students at SU, is designed to develop communication skills and provide leadership training for students. 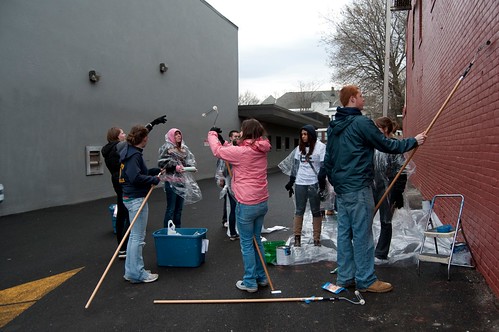 The student volunteers planted more than 150 pots of lilies along South Salina Street, painted a mural on the decaying wall of a building near the East Colvin Street intersection, helped refurbish the inside of the A.M.E. Zion Church and prepared the South Side Community Garden for the summer.

The students also learned about the South Side’s history through the sites at which they worked. “We didn’t want to just drop students in without teaching them some of the nuances of the neighborhood,” Victory said. Lunch of fried chicken and corn bread from Thomas’ Soul Food Kitchen capped the students’ immersion.

The educational aspect was something Victory said he considered vital to the event’s success. “We want to create meaningful interactions between SU students and the South Side community,” Victory said. “We’re hoping students can move beyond their assumptions of who lives there.”

Jon Gregalis, a first-year SU student and OrangeSeeds volunteer, helped plan the marketing outreach to SU students for The Big Event. Gregalis said the volunteer event usually spreads out around Syracuse, but this was the first year they picked one specific neighborhood. “We wanted to go somewhere we hadn’t helped before,” Gregalis said. “Every site we chose was a response to what South Side members said they were looking for.” 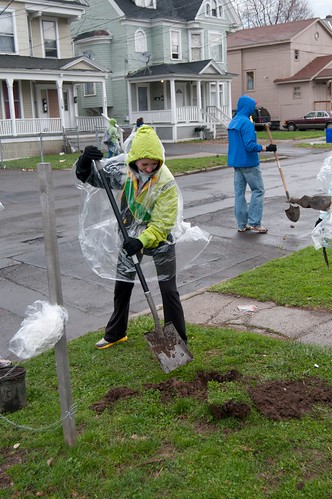 Gregalis spent most of Saturday at the South Side Community Garden, located at the intersection of East Colvin Street and South State Street. There, he helped about two dozen volunteers rake leaves leftover from autumn, clean up weeds and plant lilies.

“It was a phenomenal experience,” he said.

Hill said she recognized many students as previous volunteers at the community center. “We often have a good number of volunteers from SU,” she said. “They really are very important to what we do.”

At Saturday’s Big Event, students said they appreciated the response from community members. “We received great reactions from the neighbors we worked with,” said Jubilee Westergaard, a first-year SU student and OrangeSeeds volunteer. “They told us how much they loved seeing students as part of the community.”

Said Westergaard: “I’m so grateful for the experience.”