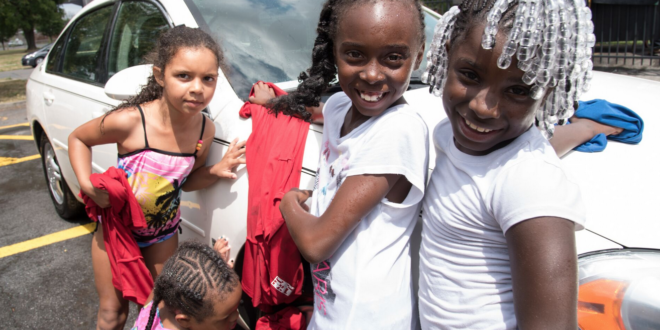 Youth at the Central Village Boys & Girls Club hold a car wash fundraiser from noon to 3 p.m. every Friday outside the center located at 212 Van Buren St. | Marianne Barthelemy

He wanted to see how much the center had changed since his time there as a boy.

Nina Mattison, who has worked at the center for the last three years also worked there in her teens. Back then, she says she served as Bachus’ group leader.

“I was joking with him about the time he jumped in the water at Wilson Park and didn’t know how to swim,” she said. “He told me not the make him look bad in front of the kids.”

“I can’t understand why he is gone,” she added.

Also on Monday, just moments after final pickup from the center, located at 212 Van Buren St., another shooting occurred about four hours prior to the shots that took Bachus’ life. Police reported a teen was shot in the stomach at 3:05 p.m. at the intersection of Midland Avenue and Martin Luther King Boulevard.

Every time the center’s director Jeff Eysaman hears about a shooting in the community, his first thought is: “I hope it’s not one of my kids.” Each weekday, 65 students ages 5 to 12 visit the center for activities and outings. 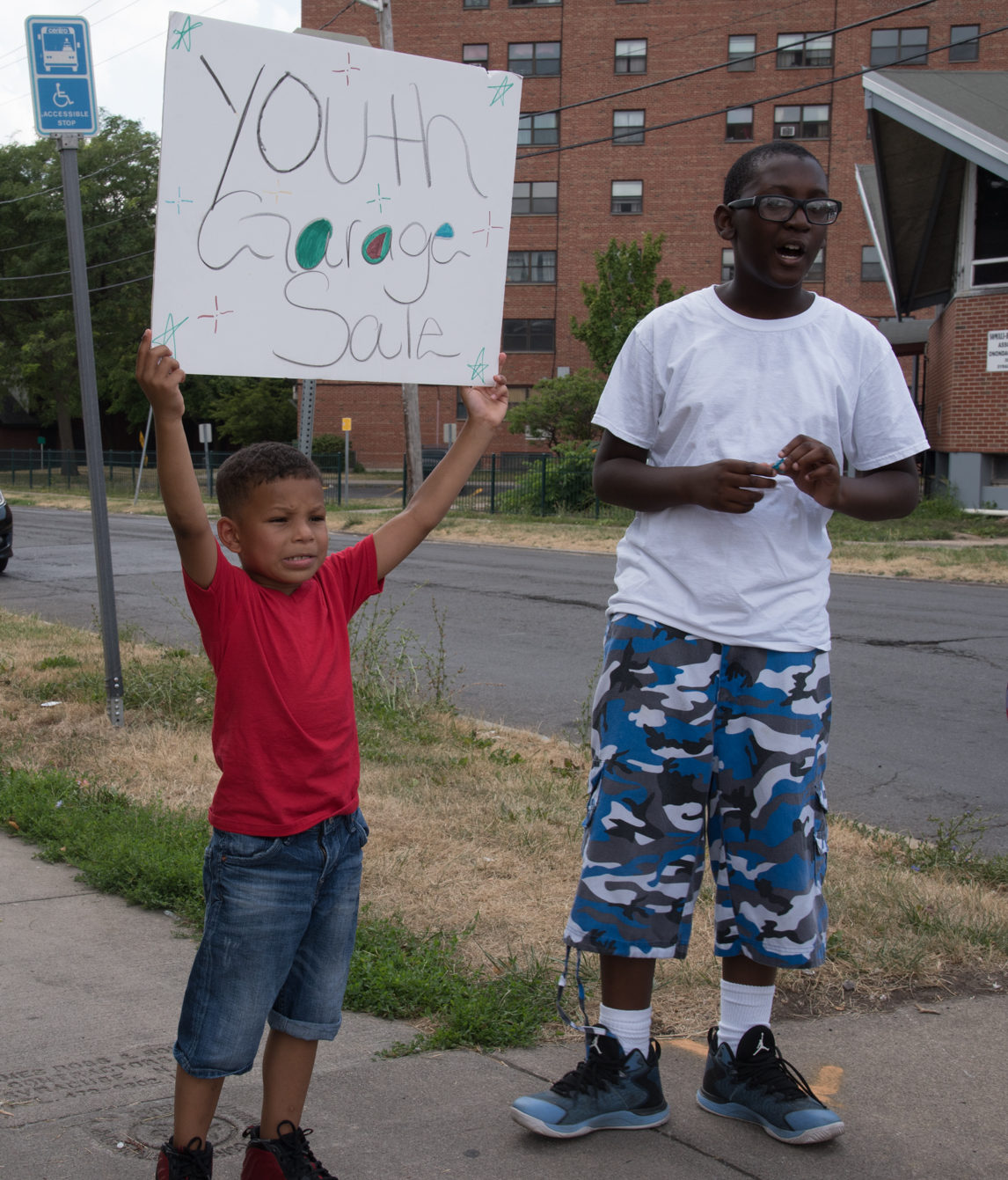 “For me, I hear fireworks and I’m ready to pull all the kids inside,” he said in jest. “But my staff knows the difference – instantly – between shots and fireworks. My number one priority, is the safety of my kids here.”

This summer the center has held various fundraisers, including a car was every Friday from noon to 3 p.m., to improve on the center’s offerings and raise funds to purchase a van or bus to safely transport more students.

“I don’t want them out on the street or stopping into corner stores alone,” he said. “With shootings happening as early as 3 o’clock, I don’t think an 8-year-old should be walking around the South Side.”

The current bus can hold 12 to 15 students. Many who currently need rides to and from school are being serviced, but field trips are limited to 10 students each trip because of the current van’s size.

“A larger bus – it doesn’t even have to be new – just something that can hold more children is needed to ensure they are not wondering around on the streets and are making it directly to and from the center safely.”

Eysaman says he has found the community to be just as concerned for the children’s safety and desires to see them steer clear of trouble. What he personally sees each day when engaging with neighbors close to the center is a courteous community that cares about their youth.

Parents have shown some concern about safety with the increase in shootings this summer, but he said, they mainly know all the details before the cops or media. He can gauge how concerned he should be based on the reactions of his staff and the parents, who are well-connected. 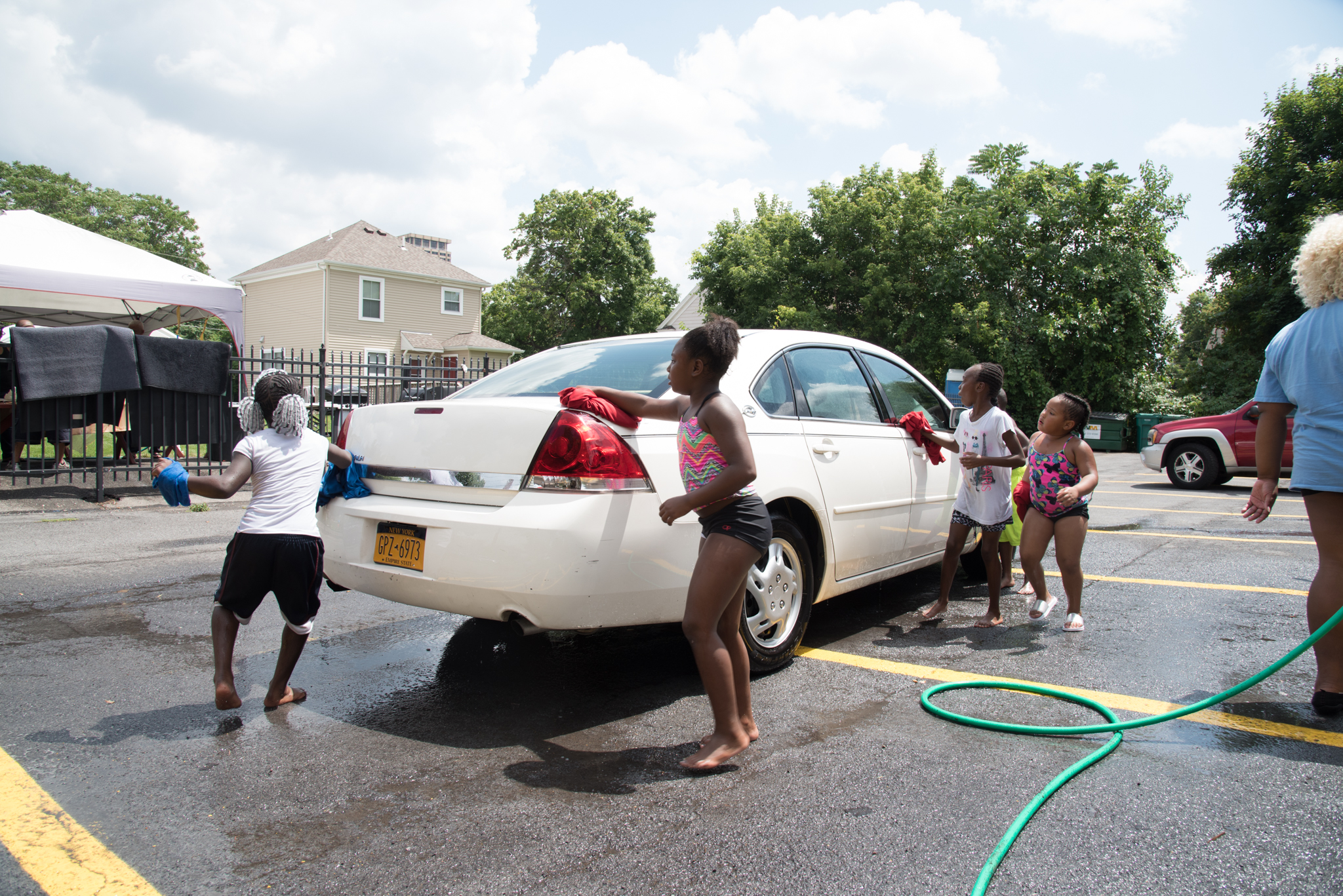 For parents, their concerns and fears are longstanding.

“It’s sad that they don’t get to experience that much freedom,” said mother Ishmiel Mantooth-el, who says her children aren’t allowed to ride their bikes around the neighborhood because she believes it’s too dangerous for them to be out.

Korey Williams, who has an 8-year-old son and 7-year-old daughter at the center, used to attend to the center as a girl. She drives her children to and from the center because of the distance to their home, but says even if she lived closer, she would not allow them to walk.

Shermel Jackson, who regularly picks up five young family members from the center, agrees. He said the youth who live in nearby Syracuse Housing aren’t allowed to play outside unsupervised because of concern for their safety.

“They know it’s dangerous, so don’t go out,” Jackson said. “But we don’t concern them with details from news stories. That’s grown folk talk, and they don’t need to be worrying about that.”

Next week the center will start to accept applications for its fall after school program. This program can take 50-55 students and requires only a $15 membership fee. For more, contact the center at (315) 579-5400.
— By Ashley Kang, The Stand director