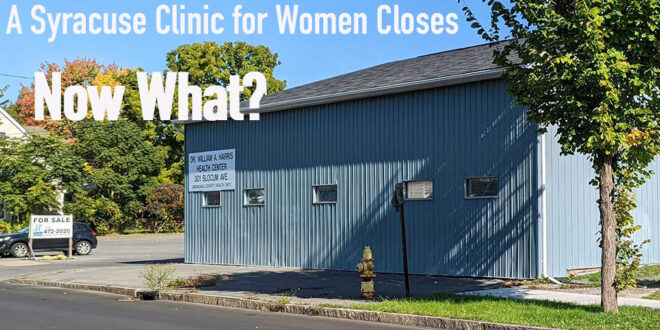 An information vacuum and the overturning of Roe v. Wade has led to an increase of disinformation on women’s reproductive health

When Syracuse Family Planning Services announced it would close, it garnered a single mention in the local news.

The shutdown, Syracuse.com’s James Mulder wrote, “could leave more than 3,500 patients who use the clinic at 301 Slocum Ave. in the lurch.”

Susan Coots, the clinic’s director, announced the sudden closing in a March letter, writing that it would leave “thousands of marginalized and low-income individuals without access to critical care.”

And then, silence. Family Planning Services, which served nearly 30,000 patients a year in two local clinics and in eight city schools, closed in April. Its last day passed without mention in the local news.

Keith Cuttler, the chief operating officer for Syracuse Community Health, knew it was a recipe for confusion and misinformation. His organization, along with Planned Parenthood, stepped in to pick up the slack in the wake of the clinic’s closing. He said the lack of news coverage left patients confused about where to turn and created a vacuum where rumors flourished — including one that his organization had put the other out of business.

“Their funding was no longer available from New York state,” Cutler said of a $1.2 million grant Syracuse Family Planning Services relied on and lost. “They were closing, so we were like ‘Let’s work together and try to bring the patients over.’”

Michelle Casey, president and CEO of Planned Parenthood of Central and Western New York, agreed that the media vacuum around the closing of Syracuse Family Planning created confusion. But she said the disinformation storm was only beginning.

That’s because, the very next month, someone leaked a draft Supreme Court decision that suggested the court would overturn Roe v. Wade, the landmark 1973 ruling that legalized abortion and made the work of organizations like Planned Parenthood, Syracuse Family Planning Services, and Syracuse Community Health possible.

And a month after that in June, the Supreme Court did just that, and many states immediately outlawed abortion, creating a confusing patchwork of reproductive health laws across the country. The new landscape created by the ruling supercharged already existing disinformation campaigns around abortion, Casey said. She said the disinformation takes many forms, including misrepresentations of abortion risk, availability, and legal consequences.

Casey said a source of a lot of the disinformation comes from crisis pregnancy centers, which often mislead women in their options by purposely omitting the correct number of weeks a woman may be pregnant for. They tell patients they might be at risk for cancer or that abortion pills aren’t safe, statements that do not match up with the science, she added.

“Having an abortion is much safer than giving birth,” Casey said.

As with the clinic closing in Syracuse, Casey believes that the rise in disinformation since the overturning of Roe vs. Wade is due in part to a lack of quality information and people’s knowledge of how to access it.

“We’ve had people ask us if abortion is still legal in New York,” Casey said. “It could be very confusing, even before Roe was overturned.”

The overturning of Roe v. Wade in combination with the closing down of the clinic has led to an influx of questions, said Hillary Warner, manager of outreach and education programs at the Syracuse Planned Parenthood.

People are now more invested in their health, Warner said.

“I think this is a critical time for people to receive adequate information,” Warner said. “A lot of people are coming to us and asking us for sexual and reproductive health information, information about their rights, and we haven’t seen this volume of questions in the past.”

To help combat some of that disinformation, Syracuse Planned Parenthood organizes multiple events in schools, youth centers, and churches to put forth accurate health information. Warner said misinformation has made people afraid; they fear they’ll be arrested or their privacy will be infringed upon. Her department focuses on combating that disinformation to build trust and ensure the community has access.

The Syracuse Planned Parenthood has extended its hours and staff to help make sure the patients affected by the clinic’s closing have access to both healthcare and accurate information. Now they’re working 10-hour days and are open every other Saturday.

“This is going to be a major effort for any kind of family planning, reproductive health, sexual health providers to absorb and really give people the care that they need, and they deserve,” Warner said.

Across social media and other online forums, Casey has seen the continual spreading of misinformation — both intentional and accidental. She said having to resort to online forums for information increases people’s risk of relying on unsafe and untrue methods to treat their conditions.

“They say we’re doing abortions right up to the moment of birth,” Casey said. “It’s all false but it’s emotional. It gets a hold of people’s emotions and gets a reaction from people.”

April Santana writes about disinformation, its effect on communities of color and how those communities are fighting back. Her work is funded by the Knight Foundation’s Combating Disinformation in Communities of Color grant and a Syracuse University SOURCE grant