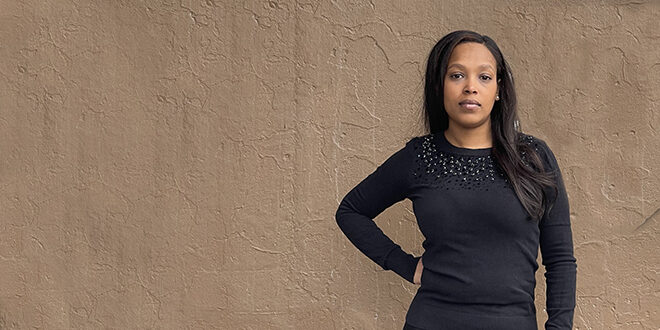 In her volunteer role as president of the Urban Jobs Task Force, Deka Dancil helps the group advocate for expanded job training for minorities in Syracuse. She spoke during a virtual presentation for Le Moyne College Thursday, April 29. | Portrait by Michael Garcia, Staff Photographer

The Urban Jobs Task Force met with Le Moyne College to present on I-81’s future for the city and how the community can be involved.

Deka Dancil, president of the UJTF, shared concerns over the group’s relationship with some members of the “Big Table,” assembled last August by Mayor Ben Walsh. Dancil says how all of the entities that have come together for the “Big Table” has been “historic” and has “not happened in Syracuse before.”

“At the same time, we are concerned that the lead agency (the Department of Transportation) is not sending signals of support for the Big Table’s mission,” Dancil said. “And we feel like our building trades are showing a similar sentiment.”

One of the solutions to ensure local hiring for the I-81 rebuild project is to implement a community workforce agreement (CWA), which is a formal, legally binding labor management agreement that includes targeted hiring provisions designed to get marginalized workers into construction careers. This would provide a solution to three out of the four challenges with creating local hiring provisions.

The challenges include meeting federal equal employment opportunity goals, the regulation banning local hire on federally-funded infrastructure projects and the makeup of local trade unions, which the Racial Equity Impact Statement found over 80% of workers on public projects in Syracuse were white, when 49% of the surface population as a whole is white.

The final challenge that wouldn’t benefit from a CWA is the local DBE capacity, which UJTF looks to increase in time for the rebuild of the project.

Dancil shared optimism in UJTF’s seat nationally, speaking on the group’s involvement with Jobs to Move America, which aims to advocate for local hiring on a national level. With the Biden Administration unveiling the $2 trillion American Jobs plan and whispers of the Local Labor Hiring Pilot program, often referenced as SEP-14, being reinstated just in time for the project, Dancil feels good about the future for local hiring.

“Current sentiments and administrative actions of federal leadership seems promising,” Dancil said. “The harms that historically infrastructure projects have caused (is starting to be understood) as well as the potential for righting those laws and the federal regulations that stand in the way.”

Still, Dancil believes that the city of Syracuse is at a point of crisis in which the I-81 rebuild project could not only exclude Syracuse residents from opportunity, but worse, can reinforce racial and economic disparities.

“Just as it did before, this project has the potential to determine our city and our region’s outlook for generations,” Dancil said. “And there is only one group of people who can ensure that we’re going to get it right this time. That group is us.”

The important ask that Dancil gave was for people of the community to show up for the Draft Environmental Impact Statement hearing, which does not have a set date. UJTF is encouraging people to show up in person and demand local jobs and to demand racial, economic and environmental justice for those that live in I-81’s shadow.

“When I asked (the NYSDOT), ‘What can the community do?’” Dancil said. “’We’ve done research. Organized. We blew your phone up. What more can we do to help push the interest of the community for this project?’ And they told me unequivocally, ‘You need to have people show up to the DEIS hearing and submit comments to us, because we will be required to respond to all of those comments.’”

It’s important to know, Dancil says, that while there are many players at the “Big Table,” this does not ensure the achieved outcome will be reached. Intentionality and willingness of the partners at the table is required, Dancil stressed.

“Many of these that you see here (partners) did not come on their own accord,” Dancil said. “They were forced by community pressure.”

“If you have any desire to see this project create a better Syracuse in Central New York for everybody and not just a few,” she said to all attendees at the virtual session to sum up: “The time to act is now.”