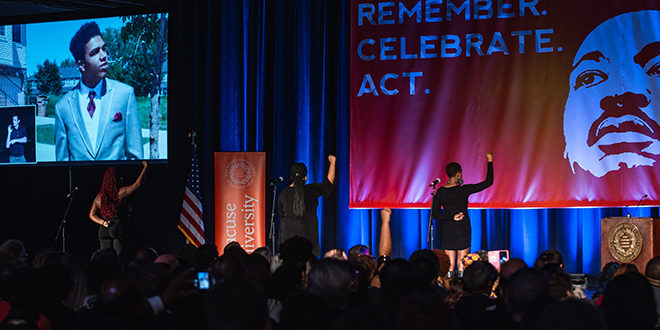 In honor of Women’s History Month, we decided to focus A Friendly Five Column on musical women in our community. The following are two spotlights on women who are more than just musicians.

ONCE AN ‘AMERICAN IDOL’ CONTESTANT
Robert Stroman is the father of 10, five boys and five girls. He worked at Niagara Mohawk/National Grid until retiring in 2003, putting eight of the 10 through private school. His wife, Diane, was a homemaker. Diane spent much of her time participating in the kids’ school activities and raising them into responsible adults.

“They participated in a lot of activities coming up,” Robert said. “We had one or two in the choir, a saxophone player and, I think, maybe two clarinet players. They were also into sports. Rooee played soccer and ran track for Faith Heritage School. She still holds a record there.

Rooee is Robert and Diane’s second oldest. “She was good,” he said. “I think it’ll be a long time before somebody breaks her record.”

“She was also a good singer,” he went on to say. “We knew Rooee could sing when she did a couple of solos at the church.” The family attended Syracuse Alliance Church on Midland Avenue.

Rooee knew that she liked singing since she was about 11 years old.

“I was shy, so I would sing softly to myself,” she remembers. “But I noticed that I could sing like Whitney Houston.”

She took voice lessons and sang in the school’s choir. In 10th grade she was given the chance to sing a solo. The Stroman clan was right there to hear her sing “His Eye is on the Sparrow.” It is a popular church song that Whitney Houston had also sung and recorded it before.

Rooee’s given name is Marlea (pronounced Marley) Stroman. You may recognize it because she was a contestant on the fourth season of “American Idol” in 2005. At 21, she had made it to the show’s second round and was offered the “Golden Ticket” to move on to Hollywood.

“It was an interesting and exciting experience but an emotional one at the same time,” she said. “We were in Washington D.C., in this large arena-like room. There were all these people around — and nobody really knew what was going on and no one was really talking to you. A few of the contestants were fun, but most were a little standoffish.”

Rooee sang Bonnie Raitt’s “All at Once.” Simon Cowell, known for his occasionally harsh critiques, told her she was “great, really, really good.” He went on to say she needed to inject “a bit of life” in her songs. Randy Jackson, another judge on the panel, said that she should focus on performing more contemporary songs.

Rooee thinks that Cowell and the other panelists’ comments were fair. Yet in the moment her mind drifted somewhere else. By then she had known that she really didn’t want to be there. She felt that it was like being on an emotional rollercoaster that she didn’t want to ride. So, she walked away.

Robert said that all her family and friends had been pulling for her. They all felt that she should’ve gone ahead because she had “nothing to lose.” He admits that he felt a little let down when she walked away.

Finally, after a few years, his son got him to take a look. When he saw it, he said he couldn’t stop laughing.

“You meet a lot of strangers when you’re in those types of situations. And when they don’t make it, it becomes emotional. That’s her. Rooee loves people and she felt sorry for them when they didn’t make it. It was an emotional experience for her, and she just got fed up.”

Beyond being “American Idol” contestant #27294, Rooee had another life calling that was tugging at her heart. She was a mom. Rooee had a young baby at home and longed to be with him.

She had felt the love of nurturing parents when she was coming up and knew the importance of it. She had also gotten a glimpse of all the hard work and potential sacrifice of values that it took to become the next “American Idol.” She felt it wasn’t for her.

“Everybody wants the best for their children, but money doesn’t buy happiness,” Robert said. “All Rooee wanted to do was be a mom and be a great wife. She’s absolutely a good mother; I call her the Mother Hen.”

Rooee is married to Brandon Hergenhan. Her son, Aiden Retzos, whom she left the competition to be with is now 15. He plays the shooting guard position on the basketball team at Faith Heritage School and is averaging 22.6 points per game. She attends all his games, and also has three other children ages 11, 7 and 2 that she is very proud of

These days most people can find her taking care of hungry lunch customers at Original Italian Pizza at 489 James St. Her smile and charm are the personality of the place. She’s been there for nine years and knows a lot of the customers by name. She loves all of them and the people she works with.

On the days she’s not at the restaurant, she cleans private residences. “I get my referrals by word of mouth and through my customers at OIP. I like the idea of helping other people get things in order,” she said.

She still likes singing and wouldn’t mind following up on an opportunity or two, but she knows it must feel right. She has gotten some phone calls. One was from popular local band Brownskin. She loves the band, but didn’t feel ready for the commitment.

Rooee has recorded a couple of commercials, too. One was for Disney’s “Beauty and the Beast” and the other for Gillette. She also sung the national anthem at a Syracuse Crunch game.

But she is happiest to be a mom. “Being a mom is the most joy I find in life. I don’t spend time thinking about shoulda- coulda-woulda,” she said. “I focus more upon my faith and growing stronger in the Lord. I trust in God’s plan for my life and believe that he will lead me in my purpose.”

TRIO OF A.N.G.E.L.S.
Everyone has heard of angels. Many believe they are those benevolent heavenly beings appointed by God to watch over the world supplying doses of his Grace in just the right measures. Some feel they even have angels assigned to them personally. We’ve all heard the stories about near miss accidents where someone should’ve been severely hurt or killed but just in the nick of time something stepped in to change the circumstances. That something, according to those who believe, is an angel.

We use the word angel at other times too. Oftentimes, in reference to kind and caring people who are upright in character and stature as angels. Some believe there are no angels.

Regardless your beliefs; Alice “Queen” Olom, SeQuoia “Iman” Kemp and Tah’leece Norris are A.N.G.E.L.S., A New Generation Eternally Lifting Souls. When Olom, 22, first arrived in Syracuse to study political science at Le Moyne College, she found that there wasn’t a suitable outlet on campus for her to express herself musically. She had just graduated from Celia Cruz Bronx High School of Music and was looking to fulfill her passion for singing. She learned Le Moyne previously had a college/community gospel choir called Voices of Praise, which was now defunct. So, she recruited others to form a new group.

Norris, 22, was one them. Also hailing from the Bronx, Norris, who likes to go by “Taye,” said she wanted to join because of her love for music.

“I’ve always been a singer,” she exclaimed

Protestant Faith Chaplin Melvin Baker, 38, has been a clergyman for 20 years. He knew that Le Moyne was a Jesuit college and believed that the school had a need for non-Catholic, Christian-based faith leadership and worship services. So, he began a ministry there, holding services on Sunday afternoons. When he first started the ministry, Olom, Norris and a couple other students jumped right in and took on a leadership role of singing praise and worship. That is when they came up with the name A.N.G.E.L.S. This happened four years ago, thus Baker knows the group well.

After going through a couple changes of members, Olom and Norris connected with Kemp. Kemp is from Syracuse and grew up Christian. Her grandfather is a preacher, and her uncle, Lesley Gilmore, is a local pastor.

“I liked singing with the group because we all had a common faith and love for God,” she shared.

“Although the group doesn’t always sing gospel, the songs are always uplifting, and we all have a love for the Lord. That’s what makes it work,” Norris said.

Olom graduated from Le Moyne in 2018. Before graduation she completed an honors project. The project, a 14-song story album, is about a mother’s navigation through the world after the death of her young son. It was inspired by the death of Trayvon Martin.

Elder Baker praised the honors project recording because he feels that it speaks to the consciousness of America and exposes its inadequacies.

“It’s sobering, and it challenges us to think about the injustices in society as they really are,” Baker said. “It is also put together very beautifully. It has a great music track and showcases healthy doses of the girls just downright singing. They’re gifted.”

He went on, saying their gifts made room for them.

Kemp heard that Syracuse University would be hosting its 34th Annual Martin Luther King Jr. Celebration and were looking for artists interested in performing. The opportunity excited her, so she told the group about it.

“I didn’t think it would really happen,” Olom said, “but I gave Iman the OK to submit a video from my honors project. They liked it so we were selected to perform. We performed one of the songs from it titled ‘Say Their Names.’”

“Say Their Names” mimicked the melody of a 1968 song written by Dick Holler called “Abraham, Martin and John,” as recorded by Marvin Gaye. The song was originally written to give honor to slain leaders Abraham Lincoln, Martin Luther King Jr. and John and Robert Kennedy. A.N.G.E.L.S.’ song has a similar meaning; it pays tribute to Trayvon Martin, Michael Brown and other young, black men who have been killed.

Charles “C Jack” Jackson, a music producer and presenter of local talent, has had A.N.G.E.L.S. perform in his past showcases.

“Their performance at the MLK Celebration was on-time and powerful,” he said. “As they were singing the names of the slain black youth, their pictures were being cast upon the large screens. It really touched people.”

The future of this group is in limbo since Olom and Norris have graduated college. Kemp wants to take the group into the studio to work on more music and videos, while Norris said that she doesn’t know what direction the group will take now.